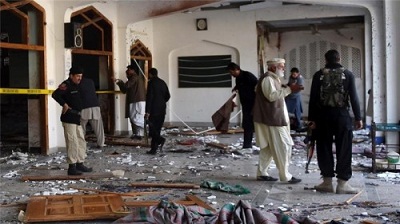 An attack on a Shia mosque in Peshawar has killed at least 19 people and injured more than 50 others, hospital sources said.unlike the BBC and CNN website, the website of ALJAZEERA reported. At least four suicide bombers, wearing the uniforms of security forces, hit the Imamia mosque during Friday prayers, according to officials. The Pakistan Taliban has claimed responsibility for the attack, in which three of the assailants succeeded in exploding their vests. One would-be suicide bomber was unable to do detonate his device, and Peshawar’s bomb disposal unit was able to defuse the unexploded vest. IN this report we reed that The assailants appeared to gain access to the mosque, which is under tight security, from an under-construction building next door. “They cut razor wire on the boundary wall to gain access,” provincial police chief Nasir Durrani said. This is the third attack against a Shia mosque since an attack on a Peshawar school killed more than 141 people on Dec. 16. The last such assault took place two weeks ago, also during Friday prayers, at a Shia mosque in the town of Shikarpur, killing at least 60 people. BBC and CNN