Home News At least 48 killed in blast at Shikarpur imambargah 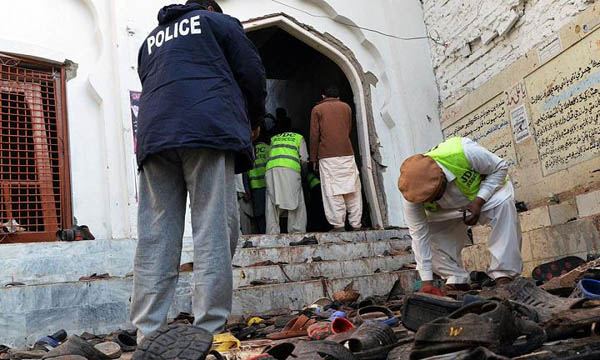 Pakistani police and volunteers gather evidence following a bomb attack at a Shiite Muslim mosque in Shikarpur in Sindh province, some 470 kilometres north of Karachi on January 30, 2015. A bomb tore through a busy Shiite mosque in southern Pakistan on January 30 killing at least 20 people, officials said, in the deadliest sectarian attack to hit the country in a year. AFP PHOTO/ FIDA HUSSAIN

At least 48 killed in blast at Shikarpur imambargah

BBC news, CNN news and a pakestani newspaper(DAWN) reported that dozens were killed in a mosuqe blast in pakestan. At least 48 people were killed and dozens others injured in an explosion inside a central imambargah (mosque affiliated with Shia Muslims) in Sindh provinces Shikarpur district on Friday.(cnn) There was a news that Civil Hospital Shikarpur had issued a list of 49 victims out of whom 46 bodies had been identified whereas the identity of 3 others was yet to be confirmed.(dawn) The cause of the blast has not been ascertained, but suspicions are that it may have been the result of a suicide attack. Reuters reported that Jundullah, a splinter group of Tehreek-i-Taliban Pakistan (TTP), which last year pledged support for the Islamic State group based in Syria and Iraq, claimed responsibility. “Our target was the Shia mosque … They are our enemies,” said Jundullah spokesman Fahad Marwat. The imambargah is located in Shikarpurs Lakhi Dar area and the explosion occurred just after Friday prayers. A number of victims were trapped under debris after the roof of the imambargah collapsed due to the intensity of the blast. Many of the casualties were shifted to hospitals in Sukkur and Larkana districts of Sindh. MWM central leader Allama Mohammed Amin Shaheedi announced three days mourning, describing the incident a failure of the government. He told Dawn that the partys further course of action would be announced in a press conference later in the evening. A huge contingent of police, rangers and ambulances arrived at the scene from the nearby towns in the aftermath of the explosion. Prime Minister Nawaz Sharif, President Mamnoon Hussain, Pakistan Tehreek-i-Insaf chairman Imran Khan and MQM chief Altaf Hussain issued condemnation messages against the incident.(dawn.com)