Home News 7th Conference of Examples of Patience was held 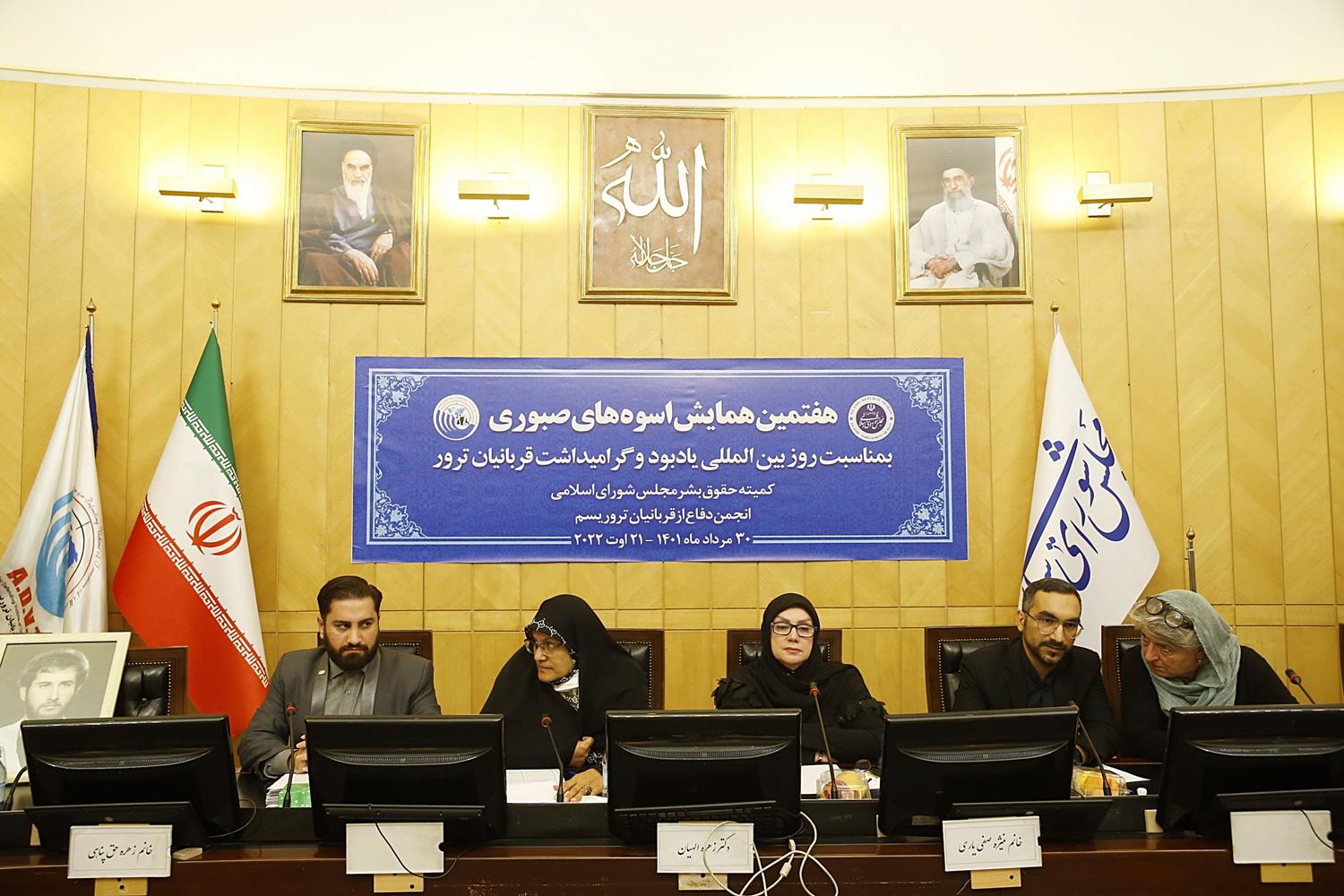 7th Conference of Examples of Patience was held

Association for Defending Victims of Terrorism (ADVT) – 7th conference of Examples of Patience organized by the Association for Defending Victims of Terrorism in cooperation with the Islamic Consultative Assembly Human Rights Committee, the United Nations Information Center (UNIC) and the Human Rights, Peace and Democracy Chair of Shahid Beheshti University on the occasion of the International Day of Remembrance of and Tribute to the Victims of Terrorism. It was held in the Islamic Consultative Assembly of Iran, attended by UN representatives, members of parliament, academics, personalities, human rights activists and families of martyrs and terror veterans.

At the beginning of the conference, Ms. Zohreh Hagh Panahi, a member of the board of directors of ADVT, said; “One of the strategic programs of the association in countering the roots of terrorism and effectively supporting the victims of terrorism is the project of rehabilitation of survivors of terrorist attacks under the title of Examples of Patience.”

She added, “So far, six sessions of Examples of Patience conferences have been held in the different provinces in the past years, and today we are holding the seventh session of this conference in the parliament of Iran.”

She continued, “In these programs, we sought to strengthen the motivation of the survivors of terrorist attacks, and our slogan is “By commemorating the victims of terrorism, let’s restrain terrorism.” I hope that with the help of national and international institutions, this project will be implemented all over the world and the human society will benefit from its great achievements.”

Then, Ms. Inger Marie Vennize, the director of the United Nations Information Center, appreciating holding this event, read the message of the Secretary-General of the United Nations on the occasion of the International Day. In this message, we read “The International Day of Remembrance and Tribute to the Victims of Terrorism is a day of reflection, recognition, and action. We reflect on the pain and suffering of those who lost loved ones. We commit to support survivors scarred by heinous acts of terrorism by amplifying their voices, protecting their rights, and seeking justice. I look forward to learning and hearing directly from survivors about their needs and challenges, at the Global Congress of Victims of Terrorism next month And let us do everything we can to prevent more victims in the future.”

Dr. Zohreh Elahian, head of the human rights committee of the Islamic Consultative Assembly, while congratulating this International Day, said that this is the first official program of the parliament in support of the victims of terrorism of Iran. We in the Parliament’s Human Rights Committee tried to make the voice of victims of terrorism heard by the world. In this regard, we have corresponded with various international bodies, including the United Nations and the Secretary-General.

In another part of the conference, Dr. Fattah Ahmadi, Vice President of International Affairs and Human Rights of the Ministry of Justice stated, “Terrorism involves and affects all aspects of the society, and our celebration should include the whole society, for this reason. It must be said that the states that have sheltered terrorists have acted against the whole society and should be held accountable for this act.”

Then Mr. Qanei, the representative of the General Department of Human and Women’s Rights of the Ministry of Foreign Affairs, said; “Various resolutions on terrorism have been issued in the Human Rights Council. In 2011, the resolution proclaiming the International Day of Remembrance of and Tribute to the Victims of Terrorism was adopted, according to which, in 2017, 21 August was proclaimed as the International Day by the United Nations General Assembly. In that resolution, the issue of support for victims of terrorism and promotion of support for survivors is addressed. We are facing a lack of international cooperation as well as national legislation of states to counter terrorism.”

The next speaker Dr. Mir Mohammad Sadeghi, university professor and chair of Human Rights, Peace and Democracy of Shahid Beheshti University, said; “Terrorism violates many basic human rights. Humans should be safe from fear and this is one of the values ​​emphasized by Islam. Our problem with terrorism is the double standard policy that governments should have a single vision and condemn terrorism anywhere and by anyone. Relatives and families of victims of terrorism are indirect victims of terrorism in a wider social scope, and we hope to take more effective steps in upholding the rights of these indirect victims and to honor them as well.

In another part of the conference, several families of martyrs and terror veterans told their stories about terrorism.

Ms. Zohreh Ranjkesh, daughter of martyr Abdul-Hossein Ranjkesh, said; “At the dawn of the one of the days of summer 1982, my father, while leaving for the carpentry, encountered terrorists who wanted to seize his motorbike, but when he refused, they resorted to force and shot him the face. And then they attacked his lifeless and bloody body by firing several bullets and stole his motorcycle. This tragedy is an example of hundreds of crimes committed by Hypocrites (MEK) against Iranian people.

On behalf of all the children who have lost their fathers by terrorists, I call on the national and international authorities to prosecute this brutal act as a crime against humanity.

Ms. Zeinab Sabzalizadeh, daughter of Martyr Maziar Sabzalizadeh, stated, “My father was born on 21 September 1972 in a religious family in Gilan province. My father was the seventh child in the family and also the youngest member of the family. He married my mother in 1376, and they had two children named Mohammad Hossein and Zeinab.”

She continued, “At dawn on 7 June 2017, my mother asked my father not to go to work today, but he refused and said goodbye to me and my brother in a strange situation and left, but my mother called him several times because of her concern, but then one of his colleagues answered and informed us that my father was martyred.”

This is how the hero of my life became heavenly without any guilt and defense with bullets from ISIS criminals.

Next speaker, Mr. Mohammad Mahdi Chizari, a terror veteran, said in his story, “It was 14 March and I was supervising the improvement and preparation of the green space in front of the Noor residential complex as usual, when it was 13:30, suddenly there was a very terrible sound in the space, an explosion and I didn’t understand anything else.

When I woke up in the hospital, I felt a very sharp pain in both legs and back. When I put my hands to my left leg, I panicked; yes, I had lost my left leg.

The 28-year-old sportsperson, who was a part of his life by running, football, taekwondo and climbing, could not even walk anymore. Today, playing with my son has been an unreachable dream for me and my child for years.

During these years, there has always been a question for me and my family, and that is, why should I and my other colleagues be subjected to the crime of Hypocrites?”

Mr. Ya’qub Estilaf, husband of Martyr Anis Nouri, said, “On the 7 July 1982, which coincided with the 15th of Ramadan, we were sitting at the Iftar table at the moment of the call to prayer, when suddenly the house bell rang. My wife opened the door and faced a strange sight. She saw a person with a bowl of food in one hand and a gun ready to shoot in the other hand, and another armed person was with him.”

He added, “One of the attackers shot into the house and my little daughter Zahra fell while she was bloody. Her mother went to save her beloved child, Zahra, and the other attacker shot her inside the house and killed her.

The narrative of the victims of terrorism and only martyr Anis Nouri is enough to show the anti-human nature of terrorist groups, especially the Hypocrites, to the society.”

Ms. Golrokh Mehri, a Zoroastrian terror veteran, said in her story of the terrorist attack, “My husband Dariush and I went to the street in December 1980 after getting a job promotion and buying a car for sightseeing and partying.

She added, “We entered the gas station to refuel. Suddenly, a huge explosion made everything black, I felt like I was in a vacuum. At first, no sound could be heard, as if all the breaths had stopped due to the power of the explosion. I only had my baby in my arms, he was crying and I couldn’t do anything for him.

She added, “I was hospitalized in Tehran hospitals for four months, but the treatments were ineffective, then I traveled to the United States to continue the treatment, there was no cure and I was disabled forever.”

I want to know what the logic of this crime is. What did the Hypocrites get, we didn’t understand and didn’t try to know about it, but we left them to God.

At the end of the event, Ms. Manijeh Safiyari, a veteran of a terrorist attack, read the statement of the conference entitled “Rebuilding Hope”.

In this statement, it is stated that terrorism is the most profound challenge in human life, which is a continuous and permanent threat to global peace and security, and the lives of millions of people have encountered endless suffering.

Victimization and disability of millions of people is the biggest price that human society has paid for the unrestrained violence of terrorism. Many resolutions have been adopted to condemn and counter it, but the world continues to witness the increasing spread of terrorist attacks.

Commemoration of victims of terrorism is an effective response to condemning and social hatred towards terrorist crimes and it will be a social indictment in the trial of the perpetrators of the crime before the public opinion of the world.

At the end of the statement, it is said that this day is a great opportunity to stand in solidarity with the victims of terrorism around the world and emphasize their role in restraining terrorism in the international arena to rebuild life and hope.

At the end of the conference, the families of the martyrs and terror veterans attended in the meeting were honored with a plaque of Examples of Patience and a gift.