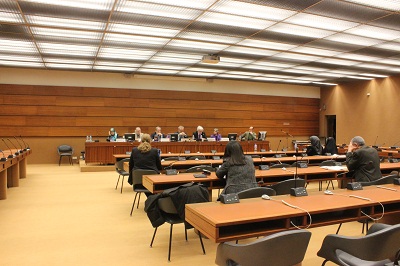 Geneva, March 12 – Association for Defending Victims of Terrorism (ADVT) is a non-governmental, cultural institution, whose members are the families and children victims of terrorism. At the in the 28th session of Human Rights Council in Geneva, Association for Defending Victims of terrorism held a panel on “Analysis of Human Aspects of Terrorism”, at the twenty-eighth session of the Human Rights council. Speakers were from Iran, France, Afghanistan, and US. The panelists: Mr. Pierre Conesa from French Association of Victims of Terrorism, Dr. Joseph Wronka, professor of social works in Springfield College in the US and Dr. Sima Samar from Human Rights Commission in Afghanistan. Mrs. Mansoureh Karami, whose husband Massoud Ali Mohammadi was the first Iranian nuclear scientist to be assassinated in Tehran. They expressed their views about the heinous acts of terrorism. At the beginning, Mr. Pierre Conesa spoke on issue of victims of terrorism and their increase after September 11 attacks and emphasized the necessity of raising their voices to the world. Then, Mr. Joseph Wronka made a speech on the issue of terrorism, he believed the terrorism rooted in extreme poverty, and due to this reason, some people are recruiting to terrorist groups. Mrs. Sima Samar, referring to the large number of victims of terrorism in Afghanistan, added that due to lack of official statistics, the exact number of victims is not clear in the country, but it is clear that the number of victims is more than whatever it is estimated. At the end of meeting, Mrs. Karami criticized terrorism, which has caused physical and psychological problems on victims of terrorism. She referred to more than 17000 victims of terrorism in Iran and criticized MKO heinous acts and urged on the necessity of defending international society for terror victims rights. Finally, some of participants had a question and answer session.

The coexistence of media and terrorism

“who is Ali Motamed?” exhibition held in HafteTir Martyrs’ Mausoleum

prize for best answers to “who is Ali Motamed?”

Hypocritical US uses human rights as tool to bash others

Pope Francis prays for the people of Libya, affected by violence and conflict, and calls on the international community to seek the path to peace