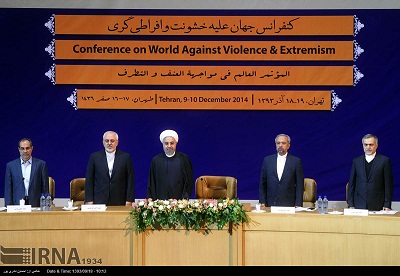 Iran’s President Hassan Rouhani says state sponsors of terrorism must cut off their direct and indirect financial aid to terrorists and cooperate with the victims of terrorism. “The countries that have helped the creation of terrorism by organizing and providing financial aid must explicitly renounce them and cut off their direct and indirect financing,” President Rouhani said in his opening speech to an international conference on the World Against Extremism and Violence (WAVE) in the Iranian capital, Tehran, on Tuesday. The Iranian president said the state sponsors of terrorism “should cooperate with victim countries and provide them with financial, intelligence and military aid.” He said that Iraq and Syria have suffered unprecedented human loss and those countries responsible for it have to take up the duty to compensate the harm. The Iranian president called for regional cooperation to amend the general educational system in an effort to counter extremist and violent interpretations of religious teachings. President Rouhani said the countries that are located in the transit route of terrorists should strengthen their political will and develop the necessary mechanisms to fulfill their responsibility for restoring stability and security to the region. He also criticized the UN Security Council’s insufficiency in dealing with serious threats against international peace and security and called on the UN to play a more active role in the campaign against terrorism. Senior political officials, intellectuals and delegates from some Asian, African and South American countries such as Iraq, Syria and Nicaragua are attending the two-day WAVE conference in Tehran. The conference comes against the backdrop of the growing threat of violence and extremism across the Middle East, particularly the atrocities committed by Takfiri ISIL terrorists that have seized swathes of land in Iraq and Syria. PRESS TV