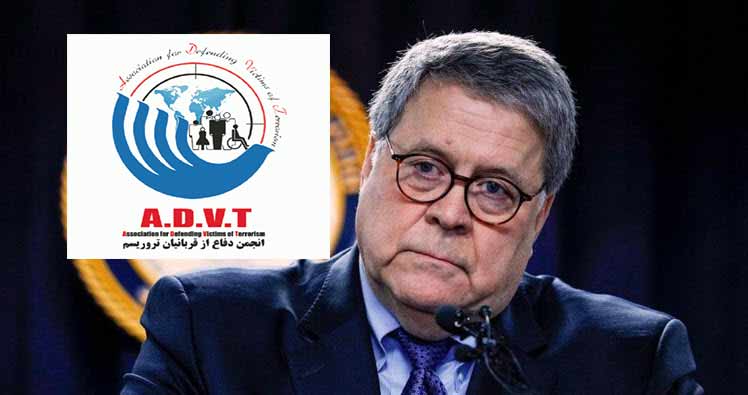 ADVT has sent a letter to William Barr. Here is the full text:

The philosophy of trial and ultimate value of law court is reflected in the society’s access to truth and justice. Therefore, elites and thinkers, after a long experience of tragic conflicts in human history, conclude that the first basis of justice in a society is an independent system from the influence of those in power and wealth to guarantee and respect the fundamental rights and freedoms of every beneficiary, including right to truth. In this process, however, the attorney general as the protector of the public interests has a prominent and fundamental role to enforce the rights of individuals by exercising the authority granted, without any consideration or being influenced, and defend the right-seeking and justice-seeking needs powerfully.

Your argument in the hearing of the Federal Court on the fact that the information on Saudi Arabia’s involvement in the 9/11 is a state secret is a great heresy on the issue of global justice which contradicts with the duties of the US Attorney General and apparently violates international law and human rights of the victims of 9/11.

Not hearing the voices of the victims seeking the truth behind the 9/11 plotters will have very detrimental effects on human rights and global security. Furthermore, it is a green light for the plotters and policy makers supporting terrorism to continue crimes and policy of terror-therapy in complete immunity and the deplorable arrogance of terrorism in the world, especially in Asia after 9/11, is originated from the results of this immunity of the holders of terrorism.

In principle, any criminal case is considered secret as long as there is no catastrophe, in order to prevent the catastrophe from happening or there may be a fear of perpetrators evading justice. Now that the crime has been committed, how investigating on the effects, how it happened and finding the hidden and obvious accomplices of the crime can be secret?

The basis of trial is in the deterrent effects and social persuasion. If the result of the investigation is not revealed, what will the usefulness of trial be? How can one prevent recurrence of the crime and relieve the pain of the survivors?

Survivors of terrorist attacks are important and integral parts of cases of terrorism who must be involved in the trial process and any verdict without the attendance of the beneficiaries will be distorted and resulted from in an unfair trial.

As a representative of the Civil Society of the victims of terrorism in Iran, the Association for Defending Victims of Terrorism expect Your Excellency to be more transparent in removing the barriers of informing 9/11 victims about realities of the tragedy and take measure to inform the public opinion about the secrecy of terrorism. We hope that we will take an effective step in undermining the foundations of terrorism and helping establish global peace and security with such actions.