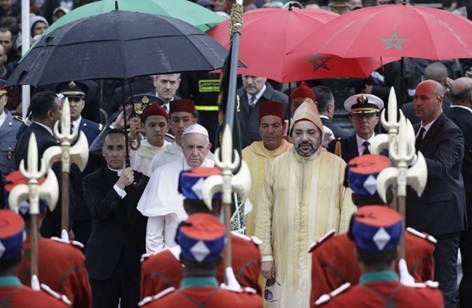 Pope extols interreligious dialogue as a means to combat terrorism

Authentic interreligious dialogue, Pope Francis said Saturday in Morocco, is a way to combat terrorism. It should lead beyond “mere tolerance” of religious minorities, the pope said, who should be treated as full citizens regardless of their number.

“While respecting our differences, faith in God leads us to acknowledge the eminent dignity of each human being, as well as his or her inalienable rights,” Francis said. “We believe that God created human beings equal in rights, duties and dignity, and he calls them to live as brothers and sisters and to spread the values of goodness, love and peace.”

Freedom of conscience and religious freedom, Francis said, which are “not limited to freedom of worship,” are linked to the dignity of the human person.

In a country where 99 percent of the population is Muslim and where locals who convert to Christianity or other faiths face persecution, the leader of 1.3 billion Catholics, a fourth of whom live in places where they’re a minority, said it’s necessary to move past the concept of a religious minority “in favor of citizenship and the recognition of the value of the person, which must have a central place in every legal system.”

Francis also said that fanaticism and extremism must be “countered by solidarity on the part of all believers, grounded in the lofty shared values that inspire our actions.”

The pope’s remarks came during a welcoming ceremony that took place in Rabat’s impressive marble Esplanade of the Hassan Tower, which can host up to 20,000 people. In an attempt to recreate the welcome Pope John Paul II received when he was here in the 1980s, the king and the pope traveled the same road – Francis in the popemobile and King Mohammed VI in a limousine, and they were greeted by thousands.

Along the way and in the esplanade, the two leaders were also greeted by a flourish of umbrellas, as it rained heavily when Francis landed.

The two spoke to the Moroccan people, authorities, representatives of civil society and with the diplomatic corps.

Speaking in Arabic, Spanish, French and English, the king said that the pope’s visit is taking place at a time when the community of nations is “facing a number of challenges,” which includes the “instrumentalization” of God’s message.

“As King of Morocco and Commander of the Faithful, I am the guarantor of the free practice of religion,” he said.

Religion, the king said, cannot be used to justify terrorism: “What all terrorists have in common is not religion, but rather ignorance of religion. Today, religion should no longer be an alibi for ignorant people, for ignorance or for intolerance.”

Morocco, a Sunni Muslim kingdom of 36 million – with just around 40,000 Catholics, mostly immigrants – reformed its religious policies and education to try to limit the spread of fundamentalism in 2004 following a terrorist attack in Casablanca that killed 43 people the year before.

In his own words, Francis sees the 27-hour apostolic visit as “an opportunity for advancing interreligious dialogue and mutual understanding among the followers of our two religions, as we commemorate – at a distance of eight centuries – the historic meeting between Saint Francis of Assisi and Sultan al-Malik al-Kamil.”

Rising to the challenge of a world more open to cooperation and greater solidarity, “marked by honest, courageous and indispensable efforts to promote a dialogue respectful of the richness and distinctiveness of each people,” is fundamental right now, Francis said, “when our differences and our lack of reciprocal knowledge risk being exploited as a cause for conflict and division.”

On the first, he said that “progress is being made” and that he’s pleased with the solidarity between nations “in the effort to find just and lasting solutions to the scourges that threaten our common home and the very survival of the human family.”

“Only together, in patient, judicious, candid and sincere dialogue, can we hope to devise adequate solutions for reversing the trend of global warming and to achieve the goal of eliminating poverty,” he said.

On migration, Francis said the issue will never be resolved by “raising barriers, fomenting fear of others or denying assistance to those who legitimately aspire to a better life for themselves and their families.”

He also said that it’s necessary for nations to come together to address the causes that force many to leave their country and families, “often only to find themselves marginalized and rejected.”

As he’s done before, the pontiff urged a change of attitude towards migrants, so that they’re seen as persons and not statistics, having their rights acknowledged in political decisions.

The consolidation of true peace, Francis said, comes through the pursuit of social justice, “indispensable for correcting the economic imbalances and political unrest that have always had a major role in generating conflicts and threatening the whole of humanity.”

Last but not least, he also praised the small yet active Catholic community, noting that the local church provides social services and also education, through schools open to students of every confession.

Afer the welcoming ceremony, king and pope visited the mausoleum of King Mohammed V, prayed in silence and left flowers. In the set up to the trip, many observers described this moment as one of the key elements of the visit, due to the importance the mausoleum has for locals. The late sultan is considered the father of modern Morocco.

Later in the day Francis was set to visit the Mohammed VI Institute for the Training of imams together with the king, but neither was expected to speak. Instead, two students are set to address them as well as Morocco’s minister for religious affairs.

The institute trains Moroccan imams, as well as those from sub-Saharan Africa, Tunisia, Libya and Europe. It tries to advance a more balanced, rationalized understanding of Islam, which was recently promoted by Francis in February, when he signed a joint declaration with the imam of Cairo’s Al-Azhar university in United Arab Emirates.

The document establishes the relationship between Catholics and Muslims as brothers called to promote peace. The pontiff quoted it on Saturday, when he said that the faithful of both religions are called to foster the culture of dialogue, adopting mutual cooperation as a code of conduct to build a society that is “open, fraternal and respectful of differences.”

Before being able to call it a day, the pontiff will visit the premises of the international Catholic Charity Caritas to talk to a group of migrants, where he’s scheduled to deliver his second speech of the trip. There will be four in total, as he’s expected to speak with the local religious community and say Mass for over 10,000 on Sunday.