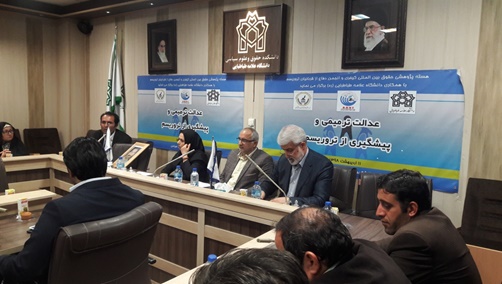 The Association for Defending of Victims of Terrorism in cooperation with the International Criminal Law Research Center organized “Restorative Justice and Prevention of Terrorism” meeting attended by university professors, students, the family of terror victims, a former member of Mujahedin-e Khalq (MEK) terrorist group, and judicial authorities at the Faculty of Law and Political Science of Allameh Tabataba’i University on 1 May 2019.

At the beginning of the meeting, Dr. Heybatollah Nejandi Manesh, professor of international law at Allameh Tabataba’i University, said “We are trying to explain the process by which all those who were involved in the emergence of the terrorist crime and various dimensions caused by its occurrence are analyzed. Restorative justice has the capacity to make it operational. We believe that this process can target the roots of terrorism and prevent the recurrence of a terrorist crime.”

He emphasized that “We are not going to decide for terrorists and the judicial system, but we believe we should give the opportunity for these people to tell society the truth about realities behind terrorism.”

Mr. Iraj Salehi, a former member of MEK terrorist group, was the next speaker. Regarding the deception of this group to attract people, he said, “I am one of those deceived people and I ruined my best days of my life for more than 19 years. Finally, in cooperation with ICRC I escaped from the fence of the cult and I was saved. Now, I have no intention except revealing the story behind this terrorist group and preventing youths and the future generations from being deceived by the terrorist group.”

He also said, “During my activity in MEK, 4 or 5 teams were dispatched by our center to commit terrorist attacks. One of them was the team which operated a mortar attack in Ahwaz in 1999, which killed and injured a number of civilians.”

He added, “When I was in the free atmosphere, I understood terrorism has two types of victims. The first category is those who have been killed and the second is consisted of the members who have been deceived by terrorist organizations. I’m not a terrorist, but I was a member of a deceiver organization who was abused. I was not a plotter, supporter, and savior of terrorism, but I was their victim. Today, I try to prevent terrorist from deceiving other youths.”

Mr. Salehi emphasized “Terrorism introduces a false world as a utopia which failed and this experience caused severe damage to me. My narration and experience are necessity for raising awareness of the youth and the future generation to prevent them from making such a mistake which ruined 20 years of my life and damaged my family. Today, the most important purpose for me is to raise the awareness of the society to restrain spread of crimes and extremism. It can be possible by revealing the reality behind terrorism and this meeting paves the way for this aim.

Elham Jalizavi, daughter of a terror victim, Jalal Jalizavi, stated that “My father was a teacher who was killed in the mortar attack in Ahwas in December 1999, whose reality was told today”. I and my family have been waiting for such a meeting in which the truth about the plotters and supporters of the operation, which resulted in the assassination of my father, is known. I attended the meeting today and I can know the answers of my questions. So, I can be calm.”

Acknowledging the organizers, she added “This meeting provided us with the part of the justice which should be implemented for the affected people. I would like former members of terrorist groups to reveal the reality behind terrorism because it can be soothing for the families of victims of terrorism”.

Further, Mr. Heshmati, the Deputy Prosecutor General of Iran, praised the organizers of the meeting, and said “The innocence of the victims of the terrorism shows that in spite of the fact that there are thousands of victims in Iran, the dimensions of these crimes at national and international levels have not been properly explained. In this regard, the role of civil societies, as the representatives of people, is more effective than state institutions. Unfortunately, Rajavi’s terrorist cult has implied itself as a national organization and resides at the heart of Europe, and the people of the world do not know what the crimes they have committed. Raising awareness of the society can be effective in introducing this terrorist group, and this is a measure that Association for Defending Victims of Terrorism is taking to give a insight into the crimes of the terrorists. Such actions should be supported.

Then, a video of Mr. Jason McCue, a British lawyer, was shown which was about implementation of restorative justice for victims of terrorism. He said “From our position, we do not want to attack the philosophy and beliefs of terrorism, but we want to put the victims of terrorism at the heart of our response. We believe that by focusing on the issue, we can change the minds of terrorist constituency and their supporters. It is better than using more traditional way of countering terrorism.”

He added that “One of the lessons I have learnt is normalization. It is important to bring the terrorist to court. It means that they should face criminal justice. It’s natural. If I or you kill someone, we should face criminal justice because we are a terrorist socially. From the political point of view, they can be in other categories. But, normalization about a terrorist, in particular in judicial system, is about implementation of restorative justice for him.

At the end of the meeting, Ms. Mansoureh Karami, Chairwoman of the Board of Directors of Association for Defending Victims of Terrorism, described the activities of the NGO at national and international level and said that the victims of terrorism play an important role in informing public opinion inside and outside Iran and in disclosing the real nature of terrorist groups, which follow their anti-human actions by abusing human rights concepts.