UNHCR: 70.8m refugees around the world

UN website reported that, in 18 June 2018, UNHCR published its annual report by the title “Global Trends” on refugees around the world in the 2018.

In 2018, 10.8m people were internally displaced and there were 2.8m new refugees and asylum-seekers, So 37,000 people being forced to flee their homes every day in 2018. By the end of 2018, about 3.5 million people were awaiting a decision on their application for asylum.

The refugee population under UNHCR’s mandate has nearly doubled since 2012. And 67% of refugees were from only five countries: Syria, Afghanistan, South Sudan, Myanmar and Somalia. 4 out of 5 refugees around the world lived in countries neighbouring their countries of origin.

Two-thirds of refugees from  that five countries indicates that war and military conflicts are the main causes refugee crisis and attention to the problem of war and creating peace is the best solution for this crisis. 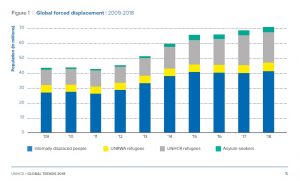