Home News Karim Asad Khan: It is only through unity, and through our common recognition of the scale and gravity of the crimes committed by ISIL, that meaningful accountability can be achieved 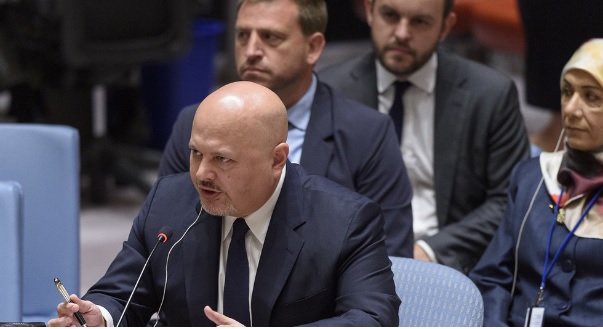 Karim Asad Khan: It is only through unity, and through our common recognition of the scale and gravity of the crimes committed by ISIL, that meaningful accountability can be achieved

Karim Asad Khan: It is only through unity, and through our common recognition of the scale and gravity of the crimes committed by ISIL, that meaningful accountability can be achieved

Mr. Khan was delivering his second report on the activities of UNITAD, during which he confirmed that his team has made “significant progress” in implementing its’ mandate, and that he expects investigators to provide concrete support for at least one case before the national courts, marking an “important milestone” in the delivery of their mandate.

The team, he said, had heard harrowing accounts of “mass killings, of entire families erased and of women and girls taken as slaves”.

He added that their courage in coming forward served to underline both “their continued heroism and the urgency with which we must work in order to deliver meaningfully on the promise made to them”, referring to the 2017 Security Council resolution that led to the creation of UNITAD.

The message of the survivors — from Shia, Sunni, Yazidi, Christian, Kaka’i, Shabak and Turkmen communities — is that ISIL fighters must face justice, not revenge, he stated.

‘Significant progress’ being made

The progress that Mr. Khan referred to during his briefing includes putting in place core staffing, facilities and evidence collection practices; the employment of 79 staff members in Iraq – including criminal investigators, analysts, witness protection experts and forensic scientists – 55 per cent of whom are women; and the collection of documentary, digital, testimonial and forensic material is now being collected.

Initial investigative work is focused on three areas:  attacks committed by ISIL against the Yazidi community in the Sinjar district in August 2014, crimes committed by ISIL in Mosul between 2014 and 2016, and the mass killing of unarmed Iraqi air force cadets from Tikrit Air Academy in June 2014.

In the last two weeks alone, said Mr. Khan, UNITAD has gained access to more than 600,000 videos related to ISIL crimes relevant to investigative work, as well as over 15,000 pages of internal ISIL documents originally obtained from the battlefield by leading investigative journalists.

The Investigative Team, continued Mr. Khan, has received crucial support, from the Government of Iraq, Iraqi national authorities, and the Kurdistan Regional Government. Going forward, the team’s work remains dependent on the continued support of the Security Council and the international community more broadly.

The ultimate success of the work of UNITAD, concluded Mr. Khan, will depend on the investigative team’s ability to draw on its independent and impartial status in order to make its work the “product of a collective endeavour”: a partnership between the Council, the victims and survivors of ISIL, national authorities and local actors, non-governmental organizations and academic institutions.

“It is only through such unity, and through our common recognition of the scale and gravity of the crimes committed by ISIL, that meaningful accountability can be achieved”.

The first report was published in November 2018. In that, UNITAD reported on its contact with governmental and nongovernmental organizations and its plans as creating a website for the news about the team and also about the financial aspects of the UNITAD’s activities.