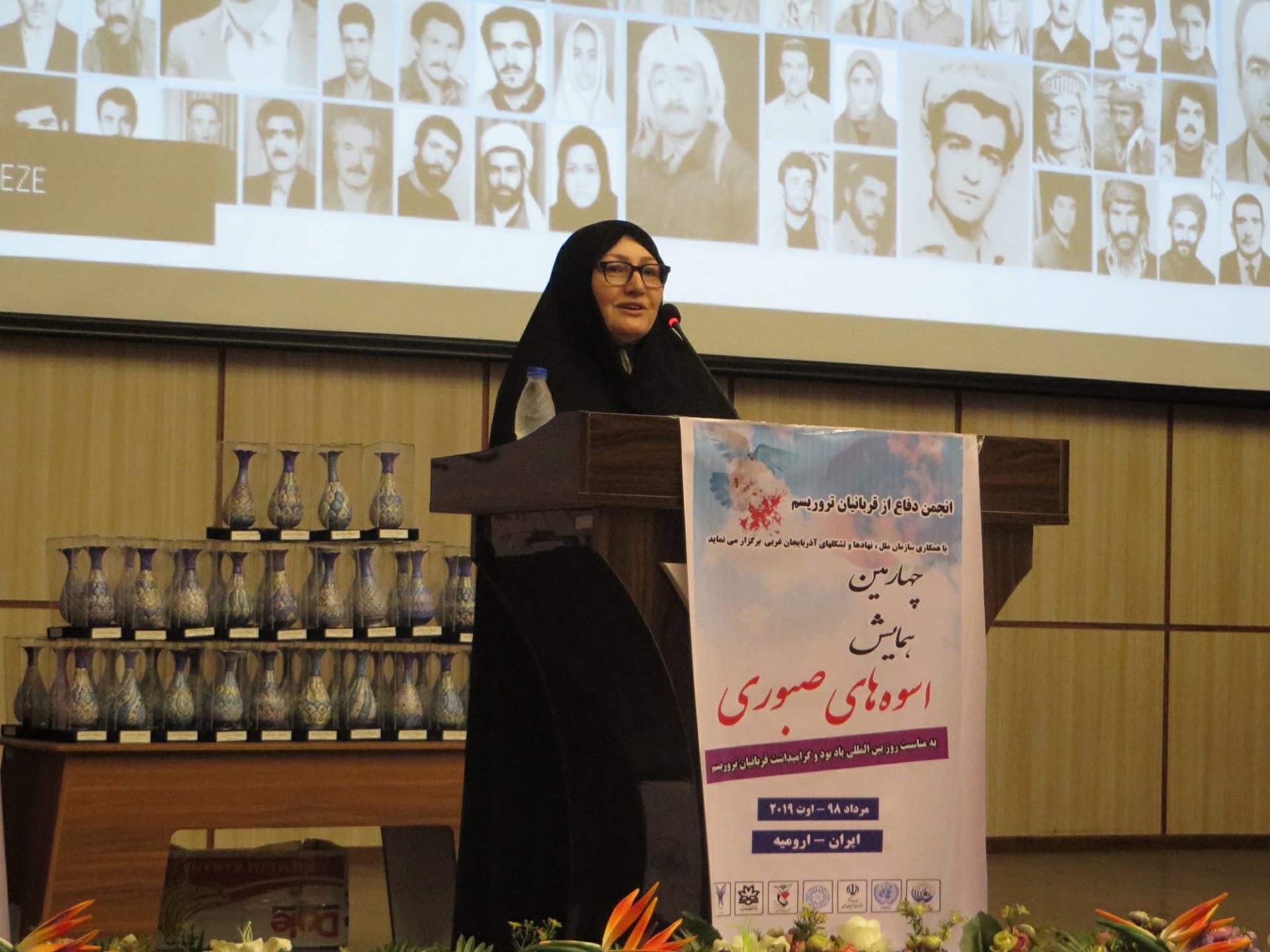 4th Conference of “Examples of Patience” Was Held in Urmia

Association for Defending Victims of Terrorism Public Relations – 4th conference of “Examples of Patience” was held in Urmia to commemorate the families of the martyrs and the survivors of terrorism of West Azerbaijan Province. It was organized in partnership with the province organizations and the United Nation Information Centre of Tehran on the International Day of Remembrance of and Tribute to the Victims of Terrorism on 21 August.

At the beginning of the event, Ms. Mansoureh Karami, chairwoman of ADVT welcomed the attendees and appreciated the authorities of the province. She stated that the families of the victims of terrorism are among the most plagued members of a society and their rights are often ignored. “Examples of Patience” conference has been held in Tehran, Isfahan, and Golestan Province and the 4th conference is being held in this city today”, she continued. Wife of martyr Alimohammadi added that the families of victims and the injured of terrorism are the examples of patience in keeping peace in every society.

Mr. Rahim Fa’al, the general director of the Foundation of Martyrs and Veterans of West Azerbaijan pointed out that there are about 200 victims of terrorism in West Azerbaijan and said that the victims of terrorism are from all parts of a society including imams of Sunni and Shia, workers, farmers, women and children were killed only because of defending truth and justice.

He emphasized that West Azerbaijan is a leading province in defending the values of human society and we should appreciate the families of the victims.

Then, Ms. Maria Dotsenko, the UNIC Director in the I.R. of Iran read the UN Secretary-General’s statement in a video message on the occasion of the International Day of Remembrance of, and Tribute to, the Victims of Terrorism. In one part of the message we can read “This International Day reminds us that no matter how long ago an attack happened, victims continue to struggle with its legacy”. In another part we read “We need to provide long-term, multi-faceted support to victims and survivors of terrorism, including through partnerships with governments and civil society, so that they can heal, recover, rebuild their lives and help others.” In the end of the message, the UN Secretary General stated “Let us commit to showing victims that they are not alone, and that the international community stands in solidarity with them, wherever they may be.”

Mr. Hazratpour, the mayor of Urmia was the next speaker. The martyrs, who were killed innocently for the Islamic system, have high positions for God. He added “Whenever our society were far from the ideals of our martyrs, the society was close to collapse.” Urmia mayor emphasized that the martyrs have sent messages to all of us which can be guides of salvation. If we follow the martyrs, our society will salvage.

Mr. Tabatabaei, Social Deputy for Urmia governor, said that, one of the best signs of a developed civil society is the number of its NGOs. Any increase in the activity of NGOs in society is the sign of social dynamism and because of it the West Azerbaijan governorate is ready to help for establishing a new representative of the Association. Tabatabaei said that all the Martyrs, in their lives, were best defenses in front of the global imperial approaches and killing of them is a sign of inability of rouge global imperials in preventing progress in Iran.

Mr. Salari, Iranian Foreign Minister’s advisor, said that, because of the superiority of the Satans, there is a hollow definition about terrorism and hence inability of international organizations in defying it. Mentioning the aims of terrorism, he considered the creating of unpredictable violence against governments for the sake of special ideology as one of them. He added: all terrorists in our region are supported by the foreign and Satanic states. He regarded the spreading of the victims’ voice and cooperation between victims of terrorism national and international associations and also collecting information about the victims, as necessary steps to counter terrorism.

Jason McCue, an international lawyer, in a video message said “I spent a lot of my career in pursuing terrorism through the criminal and civil courts around the world. He added “Element that takes a lot of time requests patience in PR media communication strategy. One of the great instances of these cases is showing that the victims of terrorism and their families never forget and an act of terrorism will never be forgotten. Justice would be suited how long it takes and that becomes a part of narrative as much as the legal action carrying out in the court. My only message to all is have patience.”

At the end of the event, M.R Moien Far, University of Urmia professor of sociology, asserted on the importance of the social effects of terrorism and said that, demolition of the national identity and creating of the social gap are results of terrorism. He added, stigmatizing of the ethnicities leads to strengthening of terrorism and terrorists want to disperse insecurity and as a result there are increased numbers of suicide and refugees. The professor at the Urmia University wanted from the Association for Defending Victims of Terrorism to increase its activity in spreading the voice of victims in Iran, in national and international arena.

In this conference, the daughter of the martyr Anwar Amini, spoke about the situation of her father’s death and said that the aftereffects of that attack on her life are incurable. The fourth conference of “Examples of Patience” ended in delivering the special gifts to the families of the victims of terrorism in West Azerbaijan county.