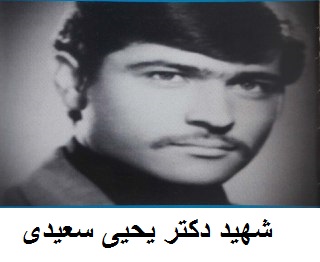 Letter of the Martyr MD Saidi’s children to Ilan Berman

ADVTNGO Media Outlet Reports that, the Martyr MD Yahya Saidi’s children have reacted to Ilan Berman’s article in National Interest and have written a letter to him.

Here is the text of the letter:

Mr. Berman, we have read your article entitled “Making sense of the MEK”. Its content is against the commitment to inform the society. We are astounded that with such a vast information about Middle East, how you have written and published this article to deceive the public opinion.

Now and in line with your article to “Making sense of the MEK”, we write and send to you a letter about our father who has been martyred by this criminal cult.

We hope that it be informative for you and the public opinion.

Story of a father by his deaf children

In the winter of the 1985, rouge hands of the evils, deprived us from our kind father who was treating patients in his dentistry in the near of our house.

After 34 years, memory of that event is unbelievable and nothing has been lessened from its sickening harshness of losing our father. But, more bittering is that, after decades of that catastrophe, its planners and supporters are free from any blame and reside freely in some European countries. This is weakening of the human rights and values and has a harsh message for survivors of this sort of catastrophes, and that, in our world, atrocity is valuable and human dignity and values are valueless and symbolic.

The Martyr MD Yahya Saidi, was a kind father, loving physician and charitable person for desperate persons in Iran, and treated many of them in free, and even afforded them drugs they needed.

In the time of that havoc, Abouzar was 5 and Zahra 6 years old and we were deaf inborn. So the loss of our father was a double burden on our inabilities in life, but with patience and bravery, we could tackle the misfortunes and after 34 years, for the first time, we recite that catastrophe to pay tribute to humanity and denounce the atrocity and by this reciting we can inform the children of Iran in today about the criminality of the groups like Monafeqin [MKO] and debase the social bases of terrorism.

Based on documents, the MKO and in cooperation with the Saddam’s regime [former dictatorship in Iraq] are responsible for this catastrophe and with boldness have accepted it’s responsibility.

Now, we are witnessing the ruining of opportunities in life for children because of extremism and violations from evildoers while international organizations do nothing to stop this situation except condemning and sending humanitarian aids in some cases, and we are been affronted by the spreading of endless fear and terror for children around the world. Violations against children abase the foundations of development and progress in societies and put in danger the human capital and future generations.

At the end and after 34 years of injustice, our message to the criminal and rogue leaders of this cult and its supporters is that: