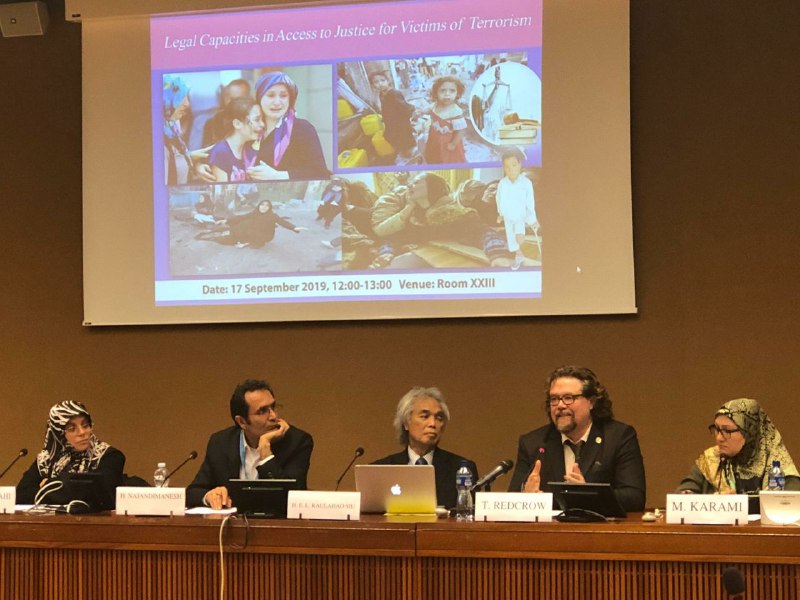 Media section of the Association for Defending Victims of Terrorism reported in the 17 September that, the panel entitled “legal capacities in access to justice for victims of terrorism” held as a side event of 42nd session HRC of UN in Geneva. this panel was held by the Association for Defending Victims of Terrorism in cooperation with the Comisión Juridica para el Autodesarrollo de los Pueblos Originarios Andinos (CAPAJ), Geneva Academy and Iraqi Alliance of Disability and experts from Iran, US, Hawaii, Maldeve, Germany, Argentine and some families of the victims of terror in Iran discussed the solutions the access to for victims of terrorism.

Eduardo Toledo, legal advisor of Nurenberg Institute said, after the Nurenberg Court, international law identified that persons can be art of the context and before it was not so. Before the court, international law was about states and international organisations. After Nurenberg Court we understand  that persons can be a part of the context of crime. After second world war we create the international personality and this capacities are important for victims of terrorism. In international criminal law the problem was that at the beginning the victims were not recognized in the crimes. In Nurenberg the victims were not part of the trials. In former Yugoslavia and Rwanda it was the same. But in the tradition of common law that victims can only participate as witnesses.  In 1998 we had a revolution in international criminal court the victims started to have role. Unfortunaltely the international criminal court doesn’t have procedures for terrorism but victims can go there for other crimes such genocide, crimes against humanity and war crimes but the cannot go there and ask for justice for the crime of terrorism. The court that recognized the terrorism crime was Lebanon.

He continued “the very nature of terrorism, committing crimes against innocent civilians — is so heinous that bringing perpetrators to justice falls far short of the very concept of justice.”

Ms. Maryam Shaheeda Mohamed, director of Geneva Academy for Peace and Mediation pointed out Ms. Bachelet’s remarks at the opening of the 42nd session of the Human Rights Council and said I want to talk about the rights of the civilians in conflicts. The Geneva Conventions are the principles which should be implemented in all communities. As the ICRC president has said, “Do not target civilians, do not rape, torture or execute, do not target hospitals or schools, do not use illegal weapons, do not threaten, kidnap or kill those who help”. These are principles which resound with all of us. But, unfortunately, what we see in conflicts today is that they are being deliberately violated by an incresing number of states, as well as by numerous non-state actors.

She added that Main reason of violent extremism is due to poverty and lack of education. Therefore, to end this, it can be proposed to provide aids and educational assistance to these countries and address SDGs. Worldwide, more than 2,000 people are killed as a consequence of armed violence daily.

Human rights reflect the minimum standards necessary for people to live with dignity and equality. Under human rights treaties, governments have the primary responsibility for protect and promote human rights, she continued.

“The UN Global Counter-Terrorism Strategy directly addresses the issue of victims of terrorist acts in the preamble and under Pillar I, Pillar II and Pillar IV. The European Union (EU) has adopted several instruments regarding victims of terrorism”, she concluded.

Mr. Thoreau Redcrow, global conflict analyst stated that when we talk about terrorism, it is a complicated problem because there is no clear definition of terrorism. For example there are different kinds of state terrorism. You can consider any act which causes horror as a terrorism. Sometimes those who you believe are terrorists, are freedom fighters for others. Different states designate some groups as terrorists and remove others according to their political issues at a time. For example, the US and the EU are among them. When they feel that they can use a group for their proxy interests, they omit it. For instance, the US removed the Mujahedin-e Khalq from the terrorist list, while they did not provide any explanation about it.

He concluded that from the legal perspective, ICC, UN, and some other states can create a mechanism about how to recognize terrorist groups. When it is up to the states, the situation is different because they have different points of view about who is terrorist and who is not.

Mansoureh karami, widow of Martyr Doctor Alimohammadi said, as a victim of terrorism, I ask human rights organizations and NGOs to pay attention to the rights of 17000 victims of terror in my country. Why a terrorist group that has killed mor than 12000 citizens of my country is delisted from the terrorist group and is active in Europe and US and does its antihuman activities?. This is the right of victims of terrorism to know that why these terrorists are free in those countries. Officials in those countries should be responsible.

The last speaker was Seyed Mohammad Ali Paknejad, son of Martyr Doctor Reza Paknejad. He said, failing to notice to a crime in a part of world, while in the other parts many parties are against that crime is neglecting the universal justice. One of the best and effective ways in punishing, especially in the case of persons whom have paved the way for criminals, is expressing regret. On the other side, states that help terrorist are accomplice. So, if terrorists know that after the crime they will not be responsible in other countries, they will have more incentive to do crimes.

He added, now, as a victim of Hate Tir terrorist incident, I want from the international community to help us in to the access to justice for the victims of the Hafte Tir Terrorist attack. In one hand, Justice is punishment of organizers of terrorism and on the other is compensating the financial and spiritual losses of victims of terrorism. After many years of safeguarding and giving the new identity to that terrorist, Government of Netherlands should express its regret and condolence with the victims’ families. This is the minimum of the justice in the field of human rights of the survivors of the Hafte Tir havoc.