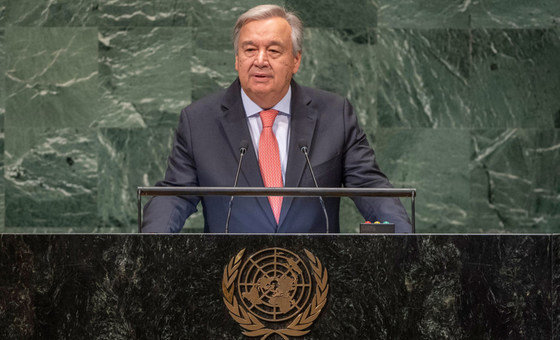 UN website reported that, Presenting his annual report on the work of the UN, UN Secretary General, Antonio Guterres, in opening ceremony of the UN General Assembly, urged the Heads of States to advance “common good” while upholding “shared humanity and values”.

UN Secretary General said about developments around the world in peace and security as successful elections in Madagascar and Congo, but said also about unresolved cases as Yemen, Libya, Afghanistan, Palestine and Refugee crisis in Venezuela and the possibility of armed conflict in the [Persian] Gulf.

Describing a recent attack on oil facilities in Saudi Arabia as “unacceptable,” Guterres urged leaders to use “reason and restraint” in the Middle East and said: “In a context where a minor miscalculation can lead to a major confrontation, we must do everything possible to push for reason & restraint.”

The Secretary-General explained that the UN has bolstered its counter-terrorism architecture; defined new strategies to tackle violent extremism; embarked on a new disarmament agenda and stressed the need for strengthening disarmament treaties.

He expressed concern over “a new risk looming on the horizon”, elaborating on “the possibility of a great fracture: the world splitting in two, with the two largest economies on earth creating two separate and competing worlds, and stressed that “We must do everything possible to avert the Great Fracture and maintain a universal system…with strong multilateral institutions”.

He added:” every measure to uphold security and human rights “helps deliver sustainable development and peace”.

“We must reestablish the integrity of the international refugee protection regime and fulfill the promises of responsibility-sharing set out in the Global Compact on Refugees”, he asserted. “All migrants must see their human rights respected”.