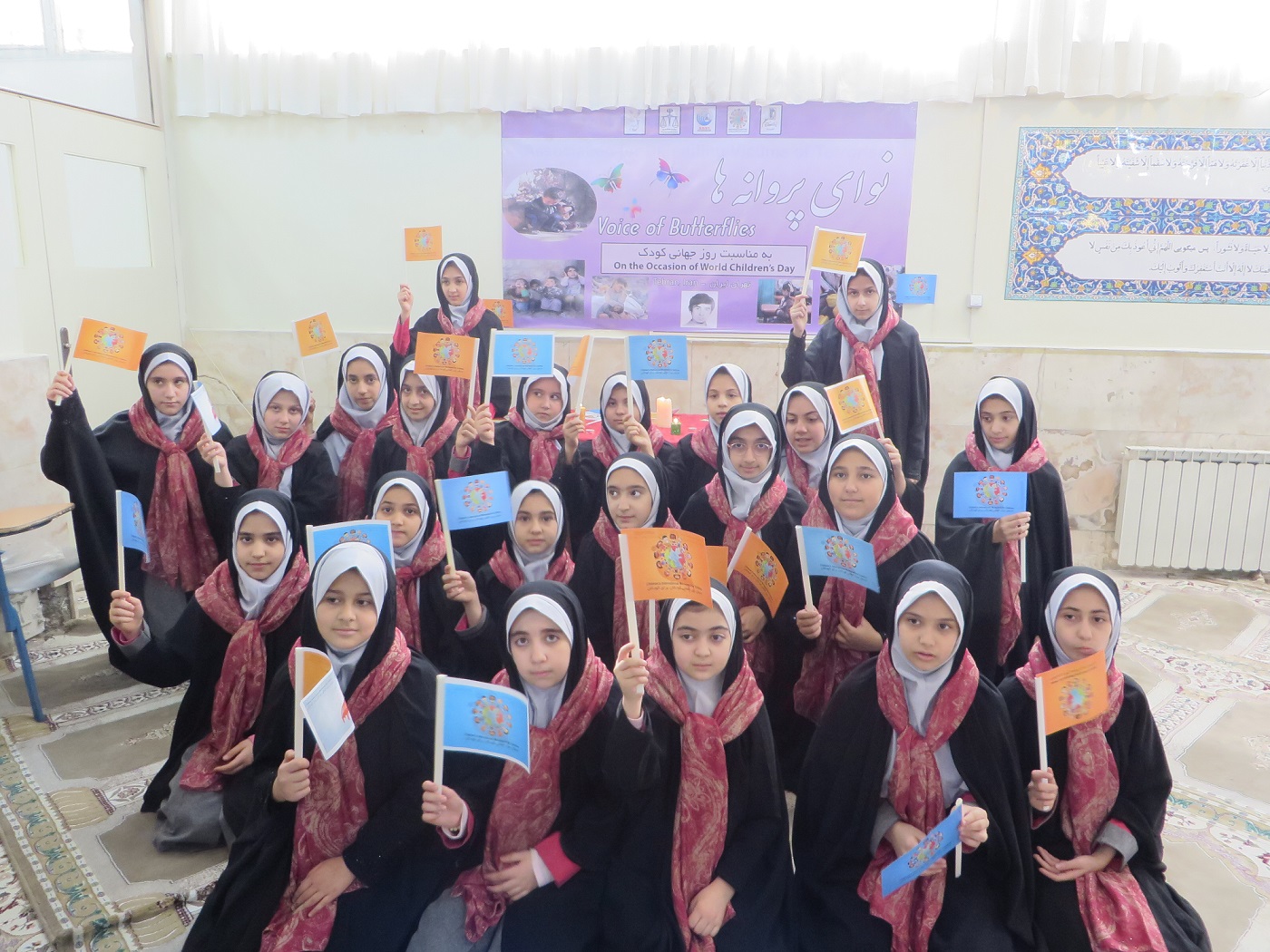 Association for Defending Victims of Terrorism Public Relations – “Voice of Butterflies” event was organized in cooperation with Children for Children’s Movement, International Peace and Friendship Ambassador Group, National Body of Convention on the Rights of the Child, and Mo’allem Educational Complex on the occasion of the World Children’s Day on 26 November 2019. It was attended by elementary students, families affected by terrorism, professors and diplomatic personalities.

At the beginning of the ceremony, Ms. Bayati, the principal of the educational complex, welcomed the guests and commemorated the children affected by terrorism and said, “The families of martyrs are living martyrs. He continued that the principals and educators pray that God Almighty help us and all the educational officials be successful in training children in line with the purposes of the martyrs.

Mr. Philip Jaffé, member of the Committee on Rights of the Child in a video message said “The single document has really changed the life of children because they’ve gone from the object of protection to becoming human beings with rights of their own which they can exercise on their own. And this is a huge advancement for humanity. The Convention does a lot of things. One of them is to provide services to children, it provides protection, and it provides participation.”

He added that “We have to realize that children have rights and if their rights are violated they should speak up, they should say loudly “we are not respected” and those violations should be taken into account by governmental services, of course helped by civil society.”

Ms. Robabeh Hossein Beigi, mother of student martyr Kazem Taheri, said “He was my first son. He was interested in science and learning. He loved mathematics; he was very sympathetic, kind and supportive in social affairs and assistance to others.”

The mournful mother said in another part of her speech that “I woke up at 2 in the morning by the sound of screaming. I turned on the lights and I saw that Kazem is bloody. I took his head and knew that he was martyred. I didn’t know how I went out of the house. I was getting crazy. I called my son and all of my body was full of pain and cry. I didn’t know where I was and what I was doing. The evil men also attacked my nine-year-old daughter and two-year-old son. They are still suffering from the injuries.”

At the end, she said that a few years later, I heard that those criminals were arrested, but I didn’t care anymore and their punishment didn’t matter. It wouldn’t reduce my pain. What I want is that we should try to educate children in order to eradicate the roots of violence against children. In this way, we can prevent such attacks that happened to me. I don’t want anyone else to taste the bitter taste of losing such a child or a teenager and experience this abhorrent incident again. And I call on the members of the terrorist cults, especially Mujahedin-e Khalq Organization, which are also called the hypocrites, to stop criminal activities and return to the community and not to waste their lives in the darkness.

In another part of the event, statement of Henrietta Fore, UNICEF Executive Director, was read by one of the students on the occasion of World Children’s Day. In one of the parts of the statement it is said that “Today we mark a momentous day for child rights. On World Children’s Day and as we mark the 30th anniversary of the adoption of the Convention on the Rights of the Child, 105 Member States have aligned to a Global Pledge promising to renew their commitment to children’s rights.”

“At the United Nations Headquarters and in more than 50 countries, children and young people have been speaking out at national summits on issues that matter to them, like the climate crisis, safety in an online world, rising migration and lack of opportunities.

“Over the last 30 years, while millions of children have seen their lives improve, millions of others have continued to grapple with poverty, inequality, discrimination and conflicts. Worse still, the 21st century has brought forth new challenges that were unimaginable just a few generations ago.

In other part of the session, Mrs. Malmir, Psychologist of the Iranian Olympic Committee, introduce herself as a victim of terrorism because of his father’s crippled by terrorism, spoke about the cause of terrorism against countries like Iran. She asked from students, why terrorism occurred? Some of them said that terrorists want to hinder the progress of the countries. Mrs. Malmir confirmed the students’ responses and added: the only way against terrorism is trying in acquiring more knowledge and empowering the country in global arena and defeating terrorist in reaching their bad wishes.

In the last section of the session, Mrs. Mansoureh Karami, Chairwoman of Association for Defending Victims of Terrorism, introduced ADVTNGO and its activities after its establishment by the families of victims of terrorism and said: goal of the families is spreading of peace and friendship and denouncing terrorism. The widow of Martyr added: “we, the families of the Martyrs of Terrorism, hate the violence and want see them in nowhere. We seek dialogue between people to solve the problems.”