Home News Bachelet: Kushayb’s detention serves as a warning to all military and political leaders who think they can commit war crimes with impunity 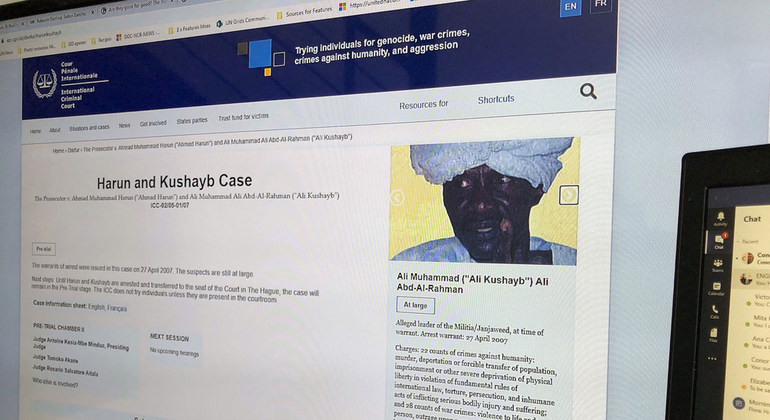 Bachelet: Kushayb’s detention serves as a warning to all military and political leaders who think they can commit war crimes with impunity

Association for Defending Victims of Terrorism – The arrest of Ali Muhammad Ali Abd–Al-Rahman, commonly known as Ali Kushayb, an alleged former Janjaweed militia leader in the restive Darfur region of Sudan, has been hailed by the UN High Commissioner for Human Rights, as an “extremely significant development”.

Mr. Kushayb, who is suspected of war crimes, and crimes against humanity, was taken into International Criminal Court (ICC) custody on Tuesday, after surrendering himself voluntarily in the Central African Republic. The charge sheet against him includes dozens of counts of murder, torture, persecution and rape.

According to a statement released on Tuesday, the ICC finds reasonable grounds to charge that, in 2003 and 2004, the Sudanese Armed Forces and the Janjaweed militia, acting together during a counter-insurgency campaign, carried out several attacks on the towns of Kodoom, Bindisi, Mukjar, Arawala and surrounding areas. During these offensives, civilians in these towns were allegedly murdered, raped, forcibly transferred or imprisoned.

Mr. Kushayb, a Sudanese national, is alleged to have been in command of thousands of Janjaweed militia, to have carried out the counter-insurgency strategy, and to have enlisted fighters to the Janjaweed militia under his command, thereby intentionally contributing to the above-mentioned crimes, Mr. Kushayb is also alleged to have personally participated in some of the attacks against civilians, between August 2003 and March 2004.

“For too long those responsible for the large-scale international crimes committed in the western Sudanese region of Darfur have escaped prosecution”, said UN rights chief, Michelle Bachelet, in response to the arrest.

“Ali Kushayb is the first, and so far only, major figure to be arrested and handed over to the ICC, in connection with the numerous killings, rapes, pillage and other crimes that occurred when he was commander of the pro-government Janjaweed militias”.

Ms. Bachelet, noted her “profound hope” that four more suspects indicted in connection with the counter-insurgency campaign, will join him before the ICC in the near future, and declared that Mr. Kushayb’s detention “serves as a warning to all those responsible for such horrendous acts of violence in Sudan, and in many other parts of the world, that one day their crimes will catch up with them”.

She added that the arrest should also act as a deterrent to other military and political leaders who think they can commit such crimes with impunity.