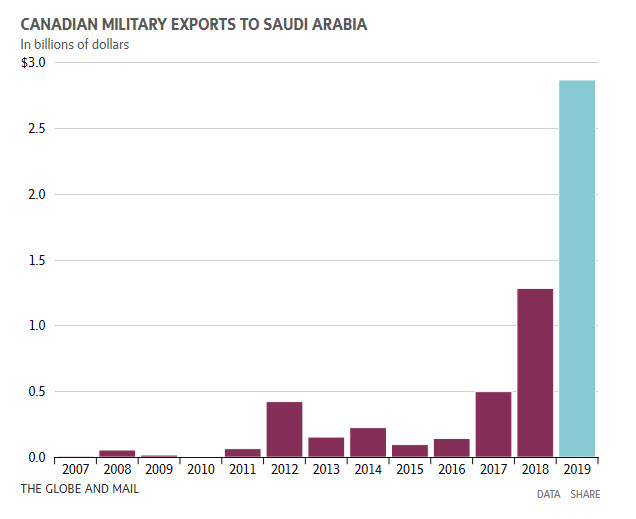 A new report from the department of Global Affairs shows Canada exported close to $2.9-billion of military equipment to Saudi Arabia in 2019, That’s up from $1.3-billion in exports in 2018 and just under $500-million in 2017.

In November, 2018, after the murder of Mr. Khashoggi, , the Canadian government announced it would cease issuing new export permits for arms sales to Saudi Arabia

“This suspend-and-reinstate routine had absolutely no impact on anything. It was all a public relations thing,” Mr. Jaramillo said. “The Saudis knew it was meaningless all along,”.”

Alex Neve, secretary-general of Amnesty International Canada, said “That entire picture does not give any confidence that we were truly seeing a serious, effective response to the concerns that had come up around arms dealings with Saudi Arabia,”

He said Amnesty has long been opposed to the sales of Canadian-made LAVs to Saudi security forces because there are “repeated and very credible reports” that they are being used in the Yemen conflict.