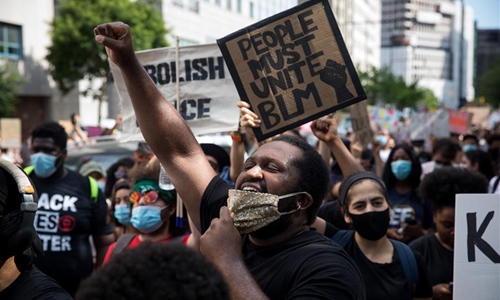 Hypocritical US uses human rights as tool to bash others

Association for Defending Victims of Terrorism – Wang Wenwen wrote an article in Global Times and said that, The US, the self-proclaimed human rights defender in the world, cannot be more hypocritical with regard to this issue. However, human rights, a much-applauded idea by the US, have become a tool with which the US uses to seek political gains.

She continued, US Secretary of State Mike Pompeo said Saturday that a UN Human Rights Council vote that condemned the raging racism and discriminatory and violent policing in the US after the death of George Floyd marks “a new low” which amounted to hypocrisy. While the international human rights body ordered a report on “systemic racism” against people of African descent, Pompeo said the council should focus on systemic racial disparities in countries such as Cuba and China.

She said in her article that, What marks a new low is the US politicization of human rights issues in ignorance of international norms and its moral obligations as the world’s superpower. The US has long viewed itself as the center of the world as if it stands on a superior and mighty ground. Only those that meet US standards and serve US interests are righteous. Even freedom of speech, a fundamental human right boasted by the US, has its own boundary in the US, which is US national interests and ideology. With such a hegemonic mind-set, the US is strict with other countries but lenient toward itself and the US’ politicization of human rights issues has been fully exposed.

We read in her article that, “You see it as the US’s right to bomb, drone, and starve any country it wants for alleged human rights violations, but gets angry if another country even suggests talking about human rights violations here. This insane hypocrisy only ensures further loss of standing in the world,” wrote one Twitter user under Pompeo’s post.

She said in conclusion that, The US has been using the human rights issues to attack its strategic adversaries, including China, Russia and Iran. Such attacks are based on a political stand rather than real concerns for the well-being of people in these countries. When Pompeo criticized China’s human rights record, he should check the numbers of coronavirus infections and deaths on US soil and look in the mirror. In today’s US, there are still 550,000 homeless people, those with no medical insurance simply expose themselves to the deadly coronavirus, and hundreds of thousands are taking to the streets to fight for equality.

She said at the end of article that, What the US boasts of is exactly what it lacks. When the light of the beacon of freedom touches the US itself, where are the “deep concerns” from the US? Why don’t US politicians call on “all parties” to engage in “dialogue” to resolve the social woes raging in their own country?