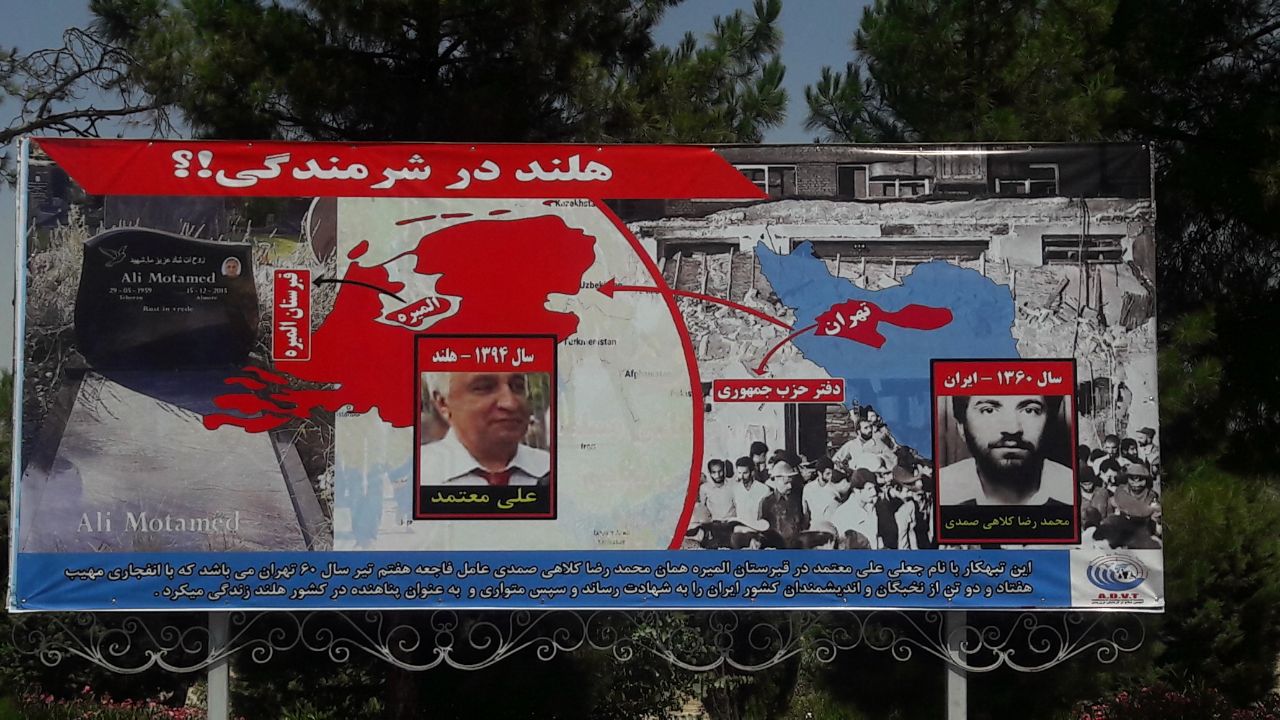 Association for Defending Victims of Terrorism – families of victims of Hafte Tir terrorist bombing issued a statement and addressed the Netherlands government.

here is the full text.

Right to the Truth

On the sunset of 28 June 1981 (7 Tir 1360 Hijri), a criminal from the devils of history caused a horrible tragedy to happen for a great nation in such a way that it is reminded as one of the gravest terrorist crimes in the history of Iran. This brutality broke the hearts of millions of people and hundreds of families mourned for their dearest ones.

All of the people who were martyred in this terrorist crime were unique elites and scientific and political figures, who were experiencing the first steps of democracy at a party assembly in the Islamic Revolution to solve people’s financial problems after falling the 2500 year-old imperial state. They had no dream but survival of the country affected by hegemonic powers during several centuries. They were fascinated by serving people and the fact that they organized a meeting at night after their hard work strongly proves their fascination for serving.

One month after the day of the attack, on 29 July 1981, the leaders and plotters of the crime high jacked a military aircraft with disguised faces and clothes and then fled to France in a disgraceful manner. After years of conspiring and commanding terrorist actions against Iranian nation by abusing asylum, they went to Iraq by the official invitation of Saddam Hussein, and with the help of the former Iraqi dictator, they planned and directed other crimes against the Iranian people.

Mohammad Reza Kolahi Samadi, the main perpetrator of the terrorist bombing, who left shortly before the explosion of the party’s office, fled to Iraq after a few months of secret life and worked for Radio Mujahidin under the pseudonym of “Karim” and then he worked in the Arefi section (relations with Iraqi government) under the same pseudonym.

In early 1990s, he left Iraq due to psychological problems and emigrated to Germany and then the Netherlands. He got asylum status under the pseudonym of Ali Motamed and lived with his second wife and finally he was killed by two Dutch criminals in late 2015.

In May 2018, Dutch media reported on the findings of the court prosecuting the murder case that Ali Motamed was Mohammad Reza Kolahi Samadi, the perpetrator of the terrorist bombing in Tehran in 1981 (Hafte Tir bombing). The news sparked a glimmer of hope in the broken, grieving, truth-seeking hearts of the Hafte Tir tragedy although the terrorist was dead. So, this clue is very promising in the Dutch court, which is the center of global appeal and justice.

Several pieces of evidence indicate that this is not a simple murder, but it is a complex international terrorist case and all of its aspects must be carefully investigated. The most important aspect of the case is the organizational background of the murdered terrorist. That may be the motivation for the murder. One of the main issues regarding the murder case of the terrorist is the survivors and families of Hafte Tir attack, who must be identified as soon as possible by the relevant court and given the opportunity to participate in the trial process.

However, a review of the process and the fate of the perpetrators of Hafte Tir bombing crime clearly indicates the Western governments’ clear negligence of the terrorist offender and other accomplices in the crime against Iranian people. But, today the Dutch court is facing a historic test for the human rights of the survivors and families of Hafte Tir bombing, and no legal or customary justification is accepted by public opinion, international law, human rights instruments, international conventions and the UN Charter.

On the 39th anniversary of the Hafte Tir tragedy and from the shrine of the eminent martyrs of the disaster, the Association for Defending Victims of Terrorism calls on the Dutch judiciary officials and diplomats, especially the Minister of Justice and Security, Attorney General and Minister of Foreign Affairs, to pave the way for survivors of Hafte Tir bombing as the beneficiaries. So they other accomplices of this terrorist offender can be identified and right to the truth and access to justice for these survivors will be provided. We call on the judicial and diplomatic authorities of Iran, especially Attorney General, Minister of Justice and Minister of Foreign Affairs, to follow up on this request through official channels until a final result is achieved.