Home News 5th Examples of Patience in Rasht: The impact of terrorism on victims can last a lifetime and reverberate across generations 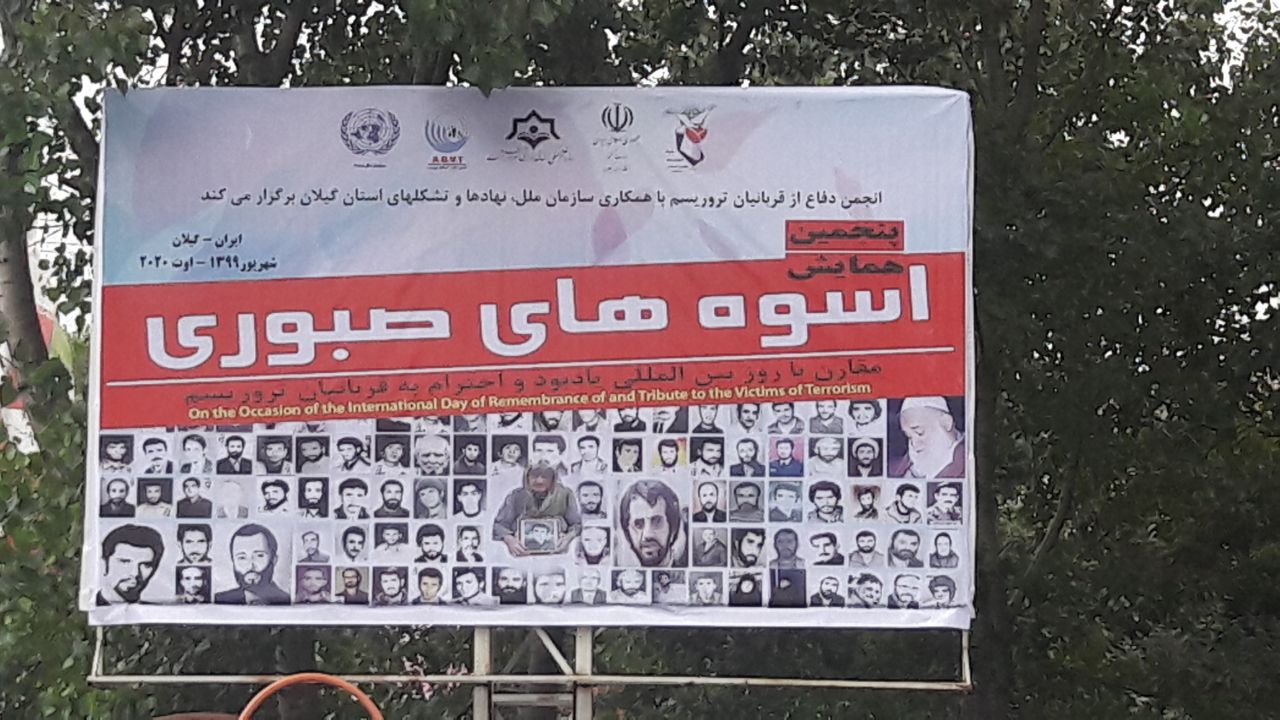 5th Examples of Patience in Rasht: The impact of terrorism on victims can last a lifetime and reverberate across generations

Association for Defending Victims of Terrorism (ADVT) Public Relations – 5th Conference of Examples of Patience was held on the occasion of the International Day of Remembrance of and Tribute to the Victims of Terrorism in the conference hall of Gilan telecommunication organization. It was organized with the cooperation of provincial bodies and United Nations office in Tehran and attended by families of the victims of terrorism of the province, provincial and city officials, university professors, and human rights activists on 23 August 2020 in Rasht.

At the beginning of the event, Ms. Mansoureh Karami, chairwoman of the board of Association for Defending Victims of Terrorism commemorated memory of the victims of terrorism of Gilan province and stated that the aim of terrorism is creating horror and after 40 years of terrorist actions in Iran, families of the victims have dealt with their problems with their patience. “From this podium, I call on all the Iranian officials and officials of other states to counter violent actions and not to allow governments to distinct between good and evil terrorism. Terrorism is evil in all forms”, she continued. She also pointed out that narrative of the families of the victims can raise awareness in the society. She concluded that the greatest thing to do is narrating martyrdom of our dearest ones to choose the best way of countering terrorism. I hope we can prevent terrorism from spreading through our cooperation and unity. 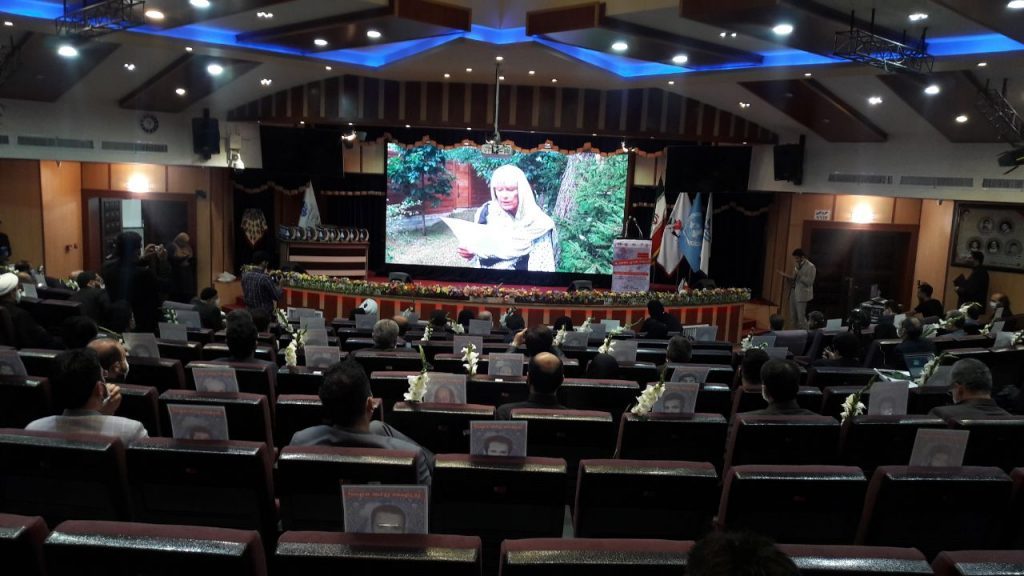 Then, the message of Antonio Guterres on the occasion of the International Day of Remembrance of and Tribute to the Victims of Terrorism, the United Nations Secretary General was read by Ms. Maria Dotsenko. In one part of the message it was said, “Today, we remember and honour all victims of terrorism. We stand by those who grieve and those who continue to endure the physical and psychological wounds of terrorist atrocities. The impact of terrorism on victims can last a lifetime and reverberate across generations.”

In another part of the message, it was stated that “remembering the victims of terrorism and doing more to support them is essential to help them rebuild their lives and heal. This includes our efforts to work with parliamentarians and Governments to draft and adopt legislation and national strategies to help victims.” At the end of the message UN Secretary General said “we must continue to support victims’ associations in their invaluable work. We must ensure that those who have suffered are always heard and never forgotten.”

Next, the message of Mr. Ohadi, Vice President and Head of the Martyrs and Veterans Affairs Foundation, was read by Mr. Pakari, Director General of the Guilan Martyrs and Veterans Affairs Foundation. In part of this message, it is stated that martyrdom is the art of the men of God and the divine will is that martyrdom is sustained. The patient nation of Iran is the greatest victim of the razor of violence and evil terrorism. Although, today, the world is frightened by the inhuman actions of all terrorists and has lost its security in today’s insecure world, Islamic Iran is safe and secure because of the bravery of the martyrs and resistance of the examples of patience who have suffered from heinous phenomenon of terrorism and guarded all the cultural and geographical borders of this proud country with insight and watchful eyes. At the end of the message, it is stated that we respect the blood of all martyrs and sympathize with all freedom seekers in the world in the 5th Conference of Examples of Patience and express our disgust with the evilness of terrorism and express sympathy of Iranian nation to all the victims around the world.

Then, Dr. Zohreh Elahian, Chair of the Human Rights Committee of the Parliament, appreciated the Association for Defending Victims of Terrorism for assisting in proclaiming the International Day of Remembrance of and Tribute to the Victims of Terrorism by the UN and said “I hope the International Day is the source of pursuing the rights of the victims in Iran and other countries.” She continued “What is surprising is that terrorist groups have committed these crimes with the support of some Western countries. The Islamic Republic of Iran is the biggest victim of terrorism. The US human rights violation case is a big one, and the crimes of the United States and other countries in the region against Iran must be reviewed. The Vincennes warship shot down an Iranian passenger plane. Pursuing the rights of these loved ones is the responsibility of the government and parliament. We will get help from NGOs and non-governmental organizations, and the families of the martyrs of terrorism will definitely assist us. We need to pass a comprehensive anti-terrorism law in parliament and use international capabilities, and the families of the martyrs of terrorism will help us.” She concluded, “I appreciate ADVT again and I call on the Ministry of Foreign Affairs to be determined and to fulfill its legal duties for this purpose.” 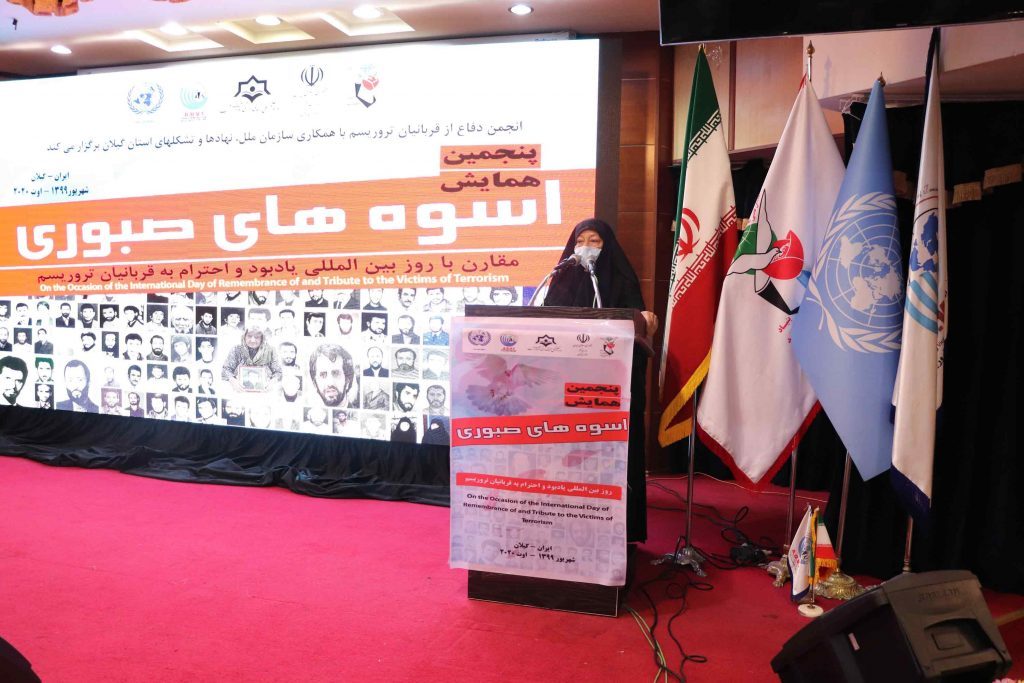 Next speaker, Dr. Danesh Kazemi, the wife of Martyr Ali Akhavin Ansari, the former governor of Gilan, expressed her memories of this great martyr his manner. He said that Dr. Ansari was a doctoral candidate in mathematics at CMSU and returned to Iran after the Revolution of 1979 to build his country. She continued that he was assassinated several times and if he was afraid of assassination, he would have stopped his activities after the first time. In the end, she said, “We are students of the school of Imam Hussein (PBUH) and we are not afraid of assassination.”

In another part of the conference, Mr. Sadrollah Nouri narrated the terrorist act happened to his sister Anis Nouri and stated that on 21 Ramadan (1981), the terrorists committed a horrible crime that history will not forget. They killed his mother at the moment of Iftar along with her family and set the house on fire at the same time. He continued that this event is a social indictment against the crimes of the Hypocrites (MEK) after thirty-nine years after killing a mother at the Iftar table.

After him, Mr. Almasi, the brother and son of the martyr, stated that most of the people who were attacked were ordinary people. By honoring these people and their victims, we should eliminate the spread of terrorism. He continued: “Legal mechanisms can be pursued by the families of victims of terrorism and realize the victims’ rights in international organizations.”

Then, Dr. Zare, the governor of Gilan, in his speech emphasized on using the capacities of non-governmental organizations in realizing the rights of the martyrs of terrorism. He stated that the Iranian people are among the major victims of terrorism and that this fact is undeniable. He continued that the martyrdom of those who have left us will remain forever for the people of Iran. The governor of Gilan further stated that the phenomenon of terrorism has existed throughout human history, but now it has become more impure and hideous.

During the ceremony, Gol Pessar (the Good Boy) documentary, which narrates the martyrdom of Mohammad Ali Fallah Abbasi, was unveiled, and at the end of the event, special gifts were awarded to the families of the martyrs attended at the meeting. It is worth mentioning that this conference was held with limited audience and with webinar format due to the spread of Coronavirus.