Home News British soldier: I do not want to be part of a corrupt government that continues to arm and support terrorism 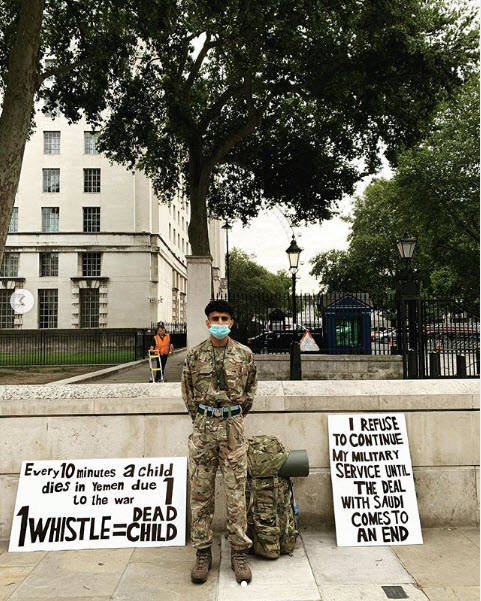 British soldier: I do not want to be part of a corrupt government that continues to arm and support terrorism

Association for Defending Victims of  Terrorism – In video shared before his protest, Batati said he ‘took an oath to protect and serve the country, not to be part of a corrupt government that continues to arm and support terrorism’

A British soldier was arrested by the Royal Military Police on Tuesday for publicly protesting against the United Kingdom’s arms sales to Saudi Arabia.

Ahmed al-Batati, a 21-year-old lance corporal from Sheffield, condemned the British government and said it had “blood on its hands” for its continued support of the oil-rich Gulf kingdom.

Images posted online showed Batati, who was born in Yemen, standing in Whitehall in his military uniform with a placard that said he “refused” to continue serving in the UK military until it ended all arms sales to Riyadh.

Footage posted by the group Stand for Justice, which Batati helped set up, shows him being arrested and escorted away by three officers from the Royal Military Police.

Batati reportedly stood outside for nine-and-a-half hours, blowing his whistle every 10 minutes to symbolically mark how often a child dies in Yemen.

“I don’t know myself yet what the army intends to do, but I’ve been released from the station and passed on to my unit,” Batati said.

Joe Glenton, a British army veteran who was sent to prison for refusing to continue his military service in Afghanistan, said Batati may be facing jail time for his protest.

“Theoretically, the military is meant to be apolitical and there are certain things you cannot do in uniform that connect your politics to the military, like protesting or canvassing for a political party.”

Speaking about the motivations behind his protest, Batati told that he made his decision based on the “lack of consideration” the UK government shows “towards the people of Yemen”.

“We are soldiers that serve the government, so why should I continue my service to a government that continues to prioritise money over the victims of Yemen,” said Batati.

“My message is clear: I refuse to serve them until they make the right decisions to end the unlawful arms trade with Saudi Arabia. I’m a man of sense, so I don’t expect or think that the government will do the right thing.”

He added: “Going into this, I didn’t have any expectations. Even if this video didn’t go viral, at least I can say I did the right thing and did my part.”

“I joined the army in 2017 and took an oath to protect and serve the country, not to be part of a corrupt government that continues to arm and support terrorism,” Batati says in the video.