Home News Mansournejad: It Is Wrong to Think That the Actions of ISIS and Taliban Are Related to Islam 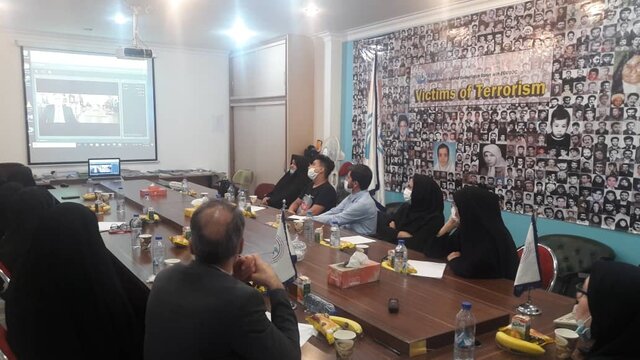 Mansournejad: It Is Wrong to Think That the Actions of ISIS and Taliban Are Related to Islam

Association for Defending Victims of Terrorism Public Relations – “Messengers of Peace” webinar was held attended by families of martyrs of terrorism and university professors.

At the beginning of the meeting, Ms. Karami, chairwoman of Association for Defending Victims of Terrorism commemorated the International Day of Peace and said when there is continuous violence and threats in the society, the foundation of peace is affected and the society suffer irreparable mental and physical damages, so the victim of terrorism are the best messengers of peace.

In another part of the meeting, Ms. Zohreh Haghpanahi, survivor of a terrorist attack and wife of martyr Mohammad Tavassoli, said that peace will not be achieved unless all the victims unite and take action in the fight against terrorism. “Journalists must help us and spread the truth and make the victims heard,” she said.

Then, Dr. Mohammad Mansournejad, a university professor of theology, at the beginning of his speech said that in examining revelatory and non-revelatory religions, three levels of analysis should be considered: religious text, religious understanding and religious practice. Now the question is whether the actions of the followers are in accordance with the texts. No, they are not. The action of the followers is different from the text. There is no harmony between the texts and the teachings and followers of the religions all over the world. He went on to say that it is wrong to think that the actions of ISIS and Taliban are related to Islam. The practice of all followers of religions does not necessarily correspond to the text of religions.

The secretary of the Religious Studies and Peace Committee of the Scientific Association for Peace Studies of Iran further said that today the world has a problem with the issue of peace. This dilemma has nothing to do with Islam. Secular thought is taking power in the world, and violent and belligerent movements are taking power as well, and that is the problem of global peace. “The world today needs a culture of peace,” he said. “We need to practice. The minimum of peace is that there should be no war, and the maximum of peace is positive, and everyone should help,” he continued. From this viewpoint, religious people have peaceful narratives of religion and religious culture can help the world create a positive peace.

In another part of the meeting, Mr. Azim Beik made some points about peace and the religion of Islam. The theologian stated that Islam is the religion of peace, and from the perspective of Quran, as the constitution of Islam, forgiveness has always been recommended, and in verse 85 of Surah Al-Hijr, it says, “Forgive with greatness and beauty.” Another criterion in Quran is verse 32 of Surah Ma’idah, which says that if someone kills a person for no reason, it is as if he has killed all of humanity. Saadi’s famous poem that human beings are members of one body is also taken from the same verse and shows that one person is worth as much as all of humanity. It may be said that the rulings in Islam are against infidels, while the logic of Quran is to distinguish between military and non-military infidels, and non-military infidels have the same honorable rights as Muslims. And Quran instructs us that if a military infidel seeks peace, you should also make peace with him, and these cases show that the logic of Islam is the logic of peace.

Dr. Alexander Azadgan, a university professor from California, was the next speaker at the meeting. “I believe there is a model of unipolarity in the world now, and that is a problem. We are still in the era of unipolarity and have not reached the world of multipolarity”, he said at the beginning of his speech. Then he pointed out six important factors in today’s world.

Senior expert of the Katehon think tank believes that the first factor is equal rights and mutual respect. The second is the non-intervention in the sovereignty of states, which is not limited to interfering in the Iran’s affairs. Other countries such as India are also under pressure from foreign countries. The third is the non-aggressive way of thinking, which is the first option of war in the aggressive approach, while UN law considers the threat of other countries to war as a violation of international regulations. He added that since 2003, international law has been weakened by a lie told by George W. Bush, who attacked Iraq, one of the strongest Arab states.

Dr. Alexander Azadgan continued “The fourth case is the rapid move towards democratization of international relations, while international relations are now controlled by the states of the Security Council, which are the largest producers of weapons in the world, and this is strange, and unfortunately the war continues because of this issue.” He said, “We need to democratize the Security Council process, and this power should be possessed by just five countries”. The university professor in political economy said that the fifth factor is to address peace and all-round security, which means that in order to have peace, all countries of the world must move towards peace and tranquility, and finally the sixth factor, according to Dr. Azadgan is calling upon international community to create a new concept of security based on three elements of mutual trust, mutual benefit, and equality and interaction.

Mr. Azadgan stated that “We cannot make peace unless we make peace within ourselves. We must achieve inner peace in order to achieve world peace. He was asked if we were incapable of making sustainable peace and he replied “Yes, as long as we fail to make peace on the basis of factors such as tackling poverty, lies, unemployment, reaction and short-sightedness, narcissism and self-centeredness in politics, and finally unculturedness in areas such as employment, sustainable peace will not be achieved.

In response to the question whether there is an unjust peace, he said “Yes, there is. Like the pact that the West signed with Hitler and one of the main reasons for unjust peace is emotional optimism instead of rational optimism.

Pointing out the role of victims of terrorism in making peace “The first measure that the families of the victims of terrorism should take is to reveal the reality of the systems of terrorist organizations such as the Hypocrites (MEK),” said the political analyst at American universities. The Iranian people are completely aware of the fact that they were complicit with Saddam. The second measure is to know those who support the Hypocrite organization. Currently, the Zionists and Mossad are the sponsors of the Hypocrite organization and they are the tools of Mossad’s assassination in Iran. Recognizing the enemies is very important. After that, the injuries of the victims of terrorism must be addressed continuously. In the end, he pointed out the importance of cyberspace and said we must have an effective presence in cyberspace.

In the end, he hoped that arrangements would be made between the Association for Defending Victims of Terrorism and the American Churches to establish a link between the civil society and the world of Western Christians, because unfortunately Muslims have been recognized as violent people by Zionists and Evangelical Christians. “We have to try to get rid of this image,” he said. We must save Islam from Zionist Judaism minds of the American audience. We need to link to people and be up to date in cyberspace and influence the audience. Those who have been injured should give voice to the victims in order to change the image and perception of Iran and Iranians and the victims in general.

In the end of the meeting, Ms. Elham Jalizavi, daughter of the martyr teacher of Ahvaz read the message “Victims of Terrorism as the Messengers of Peace”.