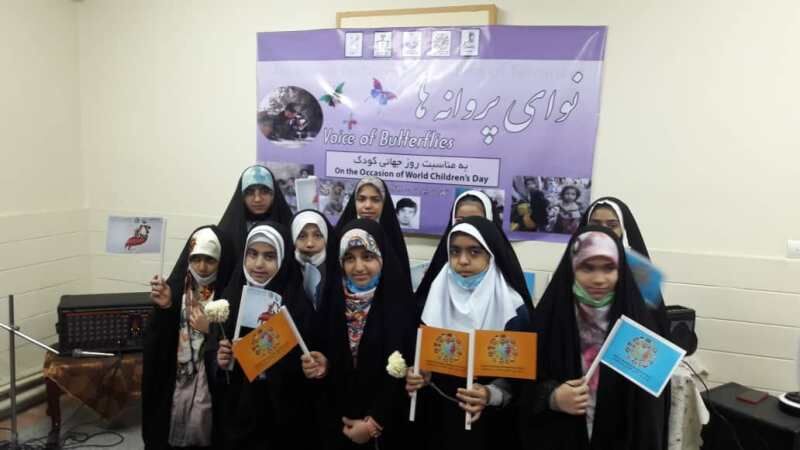 Public Relations the Association for Defending victims of terrorism – 2nd Conference of the Voice of Butterflies was held on the occasion of the World Children’s Day on 19 November in Tehran and Borujerd in cooperation with in collaboration with National reference of Convention of the Rights of Child, Deputy of Women and Family of Lorestan Governance, Foundation of Martyrs and Affairs of Veterans, Administration of Teaching and Training of Lorestan Province, Association of Peace and Friendship Ambassadors, Insan organization, principals and parents of the girl’s primary school of Haghighat.

In Tehran and after the recitation of the Quran and singing of a song, Ms. Manijeh Safiyari, survivor of a terrorist attack and representative of Children’s Movement for Children while commemorated the World Children’s Day and expressed solidarity with all the children affected by extremism and terrorism said, “Violence and terrorism has spread tragically and humanitarian measures of international organizations which should respond to some of these children has not had preventive effects and promotion of the child’s right.” She added, “I am one of those children affected by terrorism and lost my one of my legs in a terrorist attack plotted by Saddam and MEK in Nasser Khosro street. I still live with its effects after some decades.”

She concluded, “Our effective response and strategy for the world is that we strengthen the protection of children which is supporting Children’s Movement for Children.”

In another part of the conference, Ms. Tayyebeh Mohammad, head of Association of Peace and Friendship Ambassadors said, “All over the world terror is one of the worst violent manners and terror indicates that the enemy is weak. At the end she said, “Children deserve justice and welfare and I hope that children will not be affected by violence anywhere in the world.

Next, “Father Didn’t Come” statement was read by one of the children and the students awarded flowers to pay tribute to Martyr Ranjkesh, who was assassinated near the school by the Hypocrites in 1982.

The webinar was also simultaneously held in Fayyazbakhsh school, Borujerd, where was hit by a missile of Ba’ath regime and its student were martyred. Mr. Goudarzi, Deputy of Borujerd Governor and as the representative of the Governor of Lorestan welcomed the attendees and appreciated organizers and said, “We had a lot of wars in the history. Wars destruct everything. Children must be protected from wars, but during the imposed war against Iran we saw that this bitter incident happened for 68 students. It was proved that we were voiceless and the war showed that Saddam was not committed to any human rights principles and obligations.”

Dr. Samini, Political and Social Deputy of Lorestan Governance said, “Iran has joined the Convention of the Rights of Child. Although Islam has comprehensive standards for human rights, regarding the international obligations we should have good relations with the conditions of the globe. Children are the most important part of a society and we should particularly pay attention to them because they are founders of future. Child’s rights must be respected in family regarding social and livelihood issues.”

He continued, “There may be some weaknesses in our country, but given the rules, the rights of the children are protected and Behzisti Organization is one of the responsible bodies for that. We hope our children to be honorable for our country.”

Dr. Mahmoud Abbasi, head of National reference of Convention of the Rights of Child expressing sympathy with families of the martyrs in Borujerd and Kabul said, “These attacks indicate that terrorism has no limitation and border and we should have a global will to counter the black terrorism. It was a violation of all of the international laws and conventions to target a school.”

Dr. Mehrafzoun, head of Administration of Teaching and Training of Lorestan Province stated, “As you know, the aim of the conference is to pay tribute to the martyr children. It’s our duty to commemorate them. Our children were martyred by these terrorists and we are committed to the blood of these martyrs, especially 68 martyr students. The succeeding generation should be aware of the martyrs. When the disaster happened, we were 500 meters away from the school. When I arrived, I understood that the children were martyred which was a bitter incident in the history of Iran.”

Then, Mr. Zarrinjouei, head of Foundation of Martyrs and Affairs of Veterans of Lorestan province stressed that, “Convention of the Rights of Child was adopted by the U.N. in 1989 to protect the rights of children. About 50 states supported Saddam during Iraq-Iran war and it led to the violation of the rights of the Iranian Children. The International Community did not react to the issue. One of the cases of violation of children’s rights was targeting Fayyazbakhsh school in Borujerd. Although Saddam was supported, Iranian nation could conquer at the war and we hope to continue the manner of the martyrs.”

Loris Tjeknavorian, Iran goodwill ambassador of the U.N. addressed the martyr students and said, “Dear students of Fayyazbakhsh school in Borujerd, you were martyred in an evil war in 1987. We are still prying for you. We like you; we didn’t forget you and you are our soul forever. You have gone and will never come back, but we will come one day and see you.”

Ayesh Al Sanadi, member of Insan organization said, “Our children are exposed to genocide by the states who claim to protect the rights of the children. Children are forced to live in depravity and poor conditions. Children are affected most in wars and international and human rights organizations do not take measure. Importantly, schools which are the center of training are targeted brutally by some states. UNICEF called on to stop attacking schools in accordance with international laws, but history tells us about the pain and suffering of the children of Palestine, Iran, Afghanistan, Iraq, Yemen and other countries caused by the criminal regime of the United States and the West.”

He added, “In 1987 the criminal Ba’ath regime attacked Fayyazbakhsh school in Borujerd led to the martyrdom of 68 students. On 9 August 2018, the Saudi-Emirati coalition targeted a bus school and committed a terrible crime which led to martyrdom of 41 children. Since the beginning of the war against Yemen, the Coalition have killed 3931 children and besieged the country. In spite of the international reports, the United Nations and Security Council ignore them for the sake of the interests of some states. Human rights organizations and free people of the world must take measures to reduce the pain and suffering of the children and bring the perpetrators to justice at international courts.”

Ms. Parvizpour, Deputy of Women and Family of Lorestan Governance appreciated the organizers and said, “The similar aspect of the wars is that children are affected most for the interests of human beings. In the unequal war of Iraqi regime against Iran, Saddam targeted educational centers and killed children to challenge the population of Iran. Finally we could conquer in the war and now we are a powerful country in the region. Another point is that children are founders of future and we should pay attention to the training of our children. Due to some changes which challenge training, the trainers should be more aware of the methods of training generations. We should consider it in our planning. We should teach our children that the only way to have a world free of evilness is peace and friendship.”

Mr. Mostafa Bajelan, one of the survivors of the missile attack to Fayyazbakhsh said, “In 1987, I went to Imam Hassan Mujtaba (PBUH) school. Due to some restrictions we were relocated to Fayyazbakhsh school. On 10 January 1987, I went to school like other days. Suddenly, a missile hit the school and several students were killed and others were injured. After hours, the dead bodies of the students were taken to Taleghani sport complex. I was hit by projectile and was unconscious among the martyrs. My brother who came to identify me understood that I was alive and took me to the hospital. I was recovering for two years and I still have some problems including stress and depression.”

Mr. Moazami, head of Foundation of Martyrs and Affairs of Veterans emphasized on the importance of building a museum at the location of the explosion at Fayyazbakhsh school and said’ “The statues of the students should be made and installed at this location to record them on the history as the symbols of martyr students and show the brutality of terrorism and war.”

At the end of the conference, Mi’ad and Meraj Manzari, read the statement of UNICEF on the occasion of World Children’s Day.