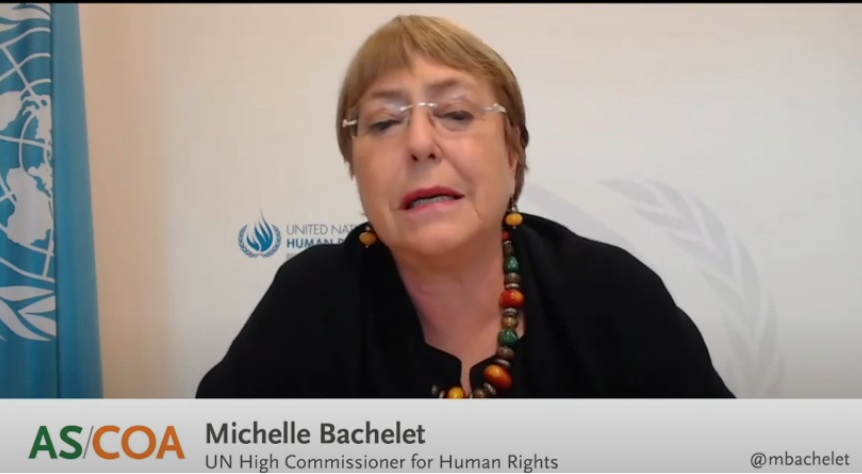 Association for Defending Victims of Terrorism – Michelle Bachelet called for an end to the long-running conflict in Afghanistan on Monday, telling a major conference in Geneva that normality could only return to the country if there was a sustained ceasefire.

Speaking at the Afghanistan 2020 Conference, UN High Commissioner for Human Rights Michelle Bachelet listed changes that would improve the lot of ordinary Afghans and prospects for rebuilding the war-torn country.

OHCHR chief Ms. Bachelet said she had six “asks” for the people of Afghanistan, beginning with an immediate commitment to protect civilians from harm

“This can save thousands of families from suffering and lessen recriminations and bolster confidence and trust among negotiators. Parties should look at, and act on, ways to reduce the use of tactics that cause the most harm to civilians. Above all, we need a common clear declared reduction in violence, and ideally a ceasefire”, she told a conference session on sustainable peace building.

Ms. Bachelet said the UN Assistance Mission in Afghanistan (UNAMA), had recorded nearly 6,000 civilian casualties between January and October this year, with 2,117 killed and 3,822 injured, and civilian casualty numbers had not fallen since peace talks started on 12 September.

As well as stopping the violence, the Afghan warring parties must vacate schools and hospitals used for military purposes, set up programmes for the release child detainees and reintegration of child soldiers, and prioritise areas for humanitarian demining, she said.

They should also reaffirm their adherence to Afghanistan’s existing international human rights obligations, allow media and civil society to flourish, and ensure women’s meaningful participation in the peace process.

She added: “As the UN, we promote ‘victim centred justice’ as an approach that puts victims at the forefront. This also means discussing painful issues about truth, remedy, justice and the prevention of further victimhood.­­

“Victims, women, and minorities are actively advocating for their voices to be heard during the Afghanistan Peace Negotiations, which offers an opportunity for parties to consider and address the irreversible loss and devastating effect the war has had on Afghans, and the real possibility – the hope of a lasting peace for all Afghans”, Ms. Bachelet said.