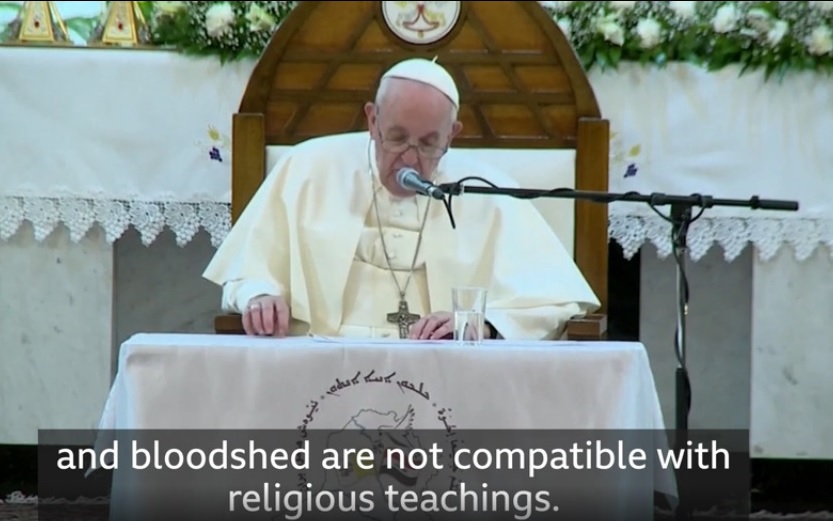 violence and extremism are not born of a religious heart

Pope Francis called for an end to extremism and violence in his opening address Friday on the first-ever papal visit to Iraq, long scarred by war and now gripped by coronavirus.

“May the weapons be silenced (…). May there be an end to acts of violence and extremism,” urged Francis in the stirring address, his first after arriving in Iraq.

In meeting with representatives of the three Abrahamic religions at Ur of the Chaldeans in Iraq, he urged Christians, Muslims, and Jews to journey along a path of peace and to promote interreligious dialogue and fraternity in the Middle Eastern nation.

Pope Francis said it was here that Abraham heard God’s call. We are the fruits of that call.

The Holy Father also urged the faithful of all religions to preserve fraternity through love.

“This is true religiosity: to worship God and to love our neighbour,” he said.

He said believers cannot be silent when terrorism abuses religion, since violence and extremism are not born of a religious heart.

Lamenting the “dark clouds of terrorism, war, and violence” that have overshadowed Iraq, Pope Francis recalled that “all ethnic and religious communities have suffered.”

The Pope added that hatred is the true enemy. “Anyone with the courage to look at the stars, anyone who believes in God, has no enemies to fight,” he said. “He or she has only one enemy to face, an enemy that stands at the door of the heart and knocks to enter. That enemy is hatred.”

Pope Francis met Saturday morning in Najaf with Grand Ayatollah Sayyid Ali Al-Husayni Al-Sistani in a visit which stressed the importance of friendship, mutual respect and dialogue between religious communities.

According to a statement from the Holy See Press Office, during the courtesy visit, which lasted about forty-five minutes,  “the Holy Father stressed the importance of cooperation and friendship between religious communities for contributing – through the cultivation of mutual respect and dialogue – to the good of Iraq, the region and the entire human family.”