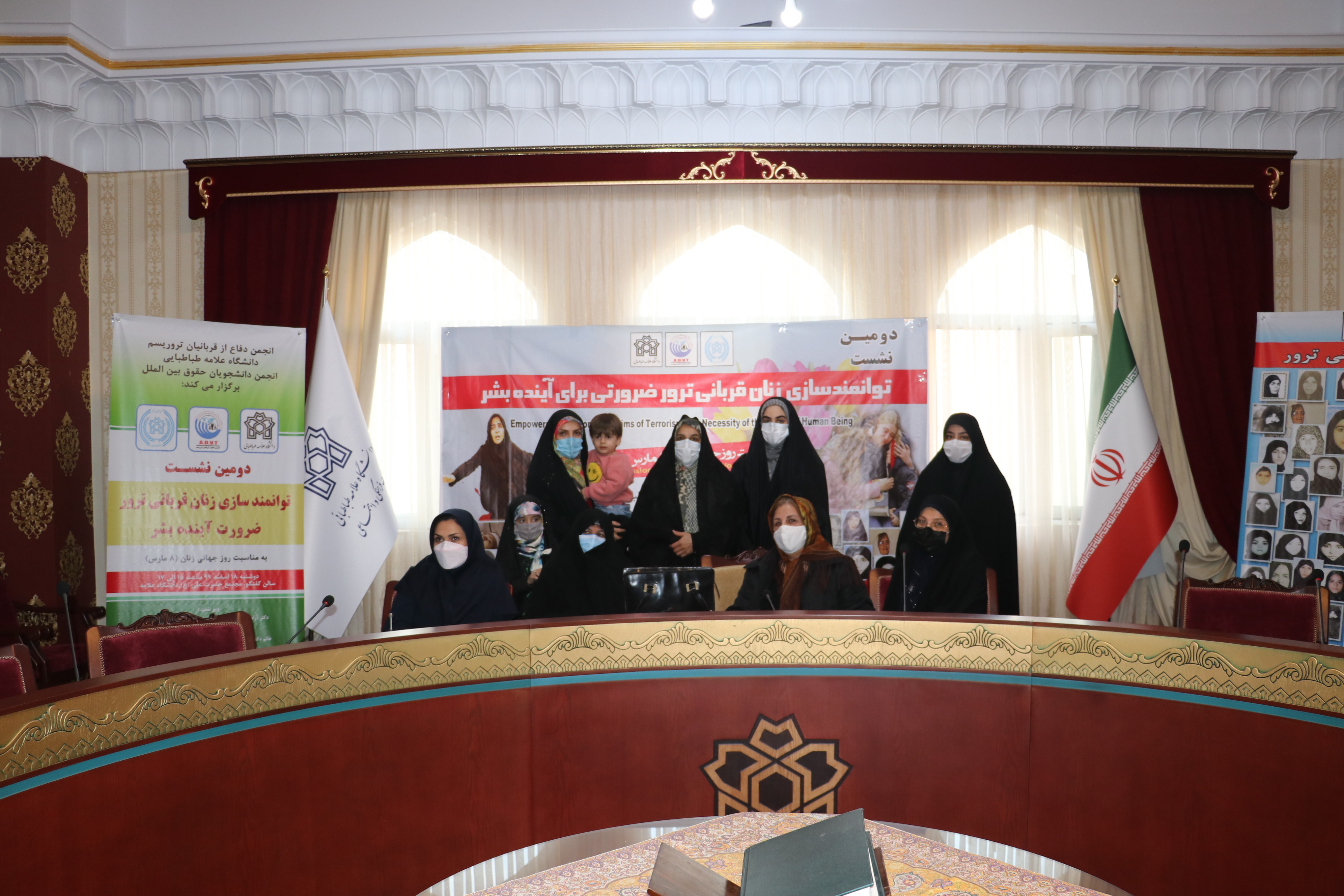 Ms. Aramesh Shahbazi, a professor at Allameh Tabataba’i University, at the beginning of the meeting said, “Terrorism is an ominous and unfortunate phenomenon, and it becomes more offensive when it is in an organized form. If target of terrorism are those supported by the international community, such as children and women, the act not only violates the international laws of human societies, but also violates the human rules. Unfortunately, there is no comprehensive definition of terrorism, and this increases the complexity of the issue.”

Professor of Allameh Tabataba’i University continued, “The existing capacities and facilities in international organizations should be used and measures should be taken to empower women victims in various social and economic dimensions.” She added, “International Women’s Day is an opportunity to raise awareness in society about the victims of terrorism and commitment to providing recovery for this group of the society and improving their conditions and developing the national and international networks to secure their rights and follow-up measures for them.”

Ms. Sho’a Kazemi, an associate professor and faculty member of Al-Zahra University said about the mental health of women affected by terrorism, “People who are exposed to terrorist acts are experiencing disruptions. Depression, anxiety, fear, decrease in self-esteem, sleep disturbance, low tolerance, anger, confining himself at home, leaving work, and committing suicide are some of the symptoms of those affected by terrorism, especially women. She also made some recommendations on the improvement of the conditions of those affected.

In another part of the meeting, Dr. Ahangar a researcher at the Institute for Social Studies and Research at Tehran University said, “There are cases in which women victims of terrorism have to remain single forever and suffer from many problems. Also, some of the women who are at sanatoriums do not receive effective nursing services and some of these women may suffer from unknown diseases.” She stated that equipping sanatoriums and hiring proficient nurses and timely payment of services are some of the factors to improve the situation of the women victims of terrorism.

Next speaker, Dr. Zohreh Elahian, member of the Islamic Parliament of Iran and member of the National Security Commission of the Parliament spoke about the topic of “Women; the Common Aspect of Harms of Terrorism”. She said, “The issue of women affected by wars and terrorist acts is an important issue. We face terrorist acts in the region and in various countries from Afghanistan and Pakistan to Iraq and Palestine.” She added, “Many women in different countries have suffered a lot due to terrorist acts and such incidents show that human rights and humanitarian rights are considered only as a term and a slogan”.

Member of the National Security Commission of the Parliament continued, “We need to reconsider about this terrible situation and the human rights community capacity should be used to address these harms. The United Nations and the Human Rights Council and other bodies should help and demand to defend women victims of terrorism.”

Member of the Committee of the Human Rights of the Parliament continued that we experienced Saddam’s attack from the very beginning of the revolution and saw that other countries and Western superpowers supported Saddam. Such attacks caused many women to be injured and martyred, and today a lot of women are those who have been affected by chemical attacks of Saddam.

Pointing out the terrorist attack on the Parliament of Iran and injury of women in this incident, she said we have not forgotten the memory of the ISIS attack on Parliament. If the NGOs are not concerned about such issues and do not have follow-up, these attacks may recur and serious harms can be imposed on the society.

During the meeting, some of the victims of terrorism affected by terrorist acts of Saddam, Hypocrites (MEK), Al-Qaeda, Komoleh, and ISIS narrated their story of the terrorist attacks led to their injury. 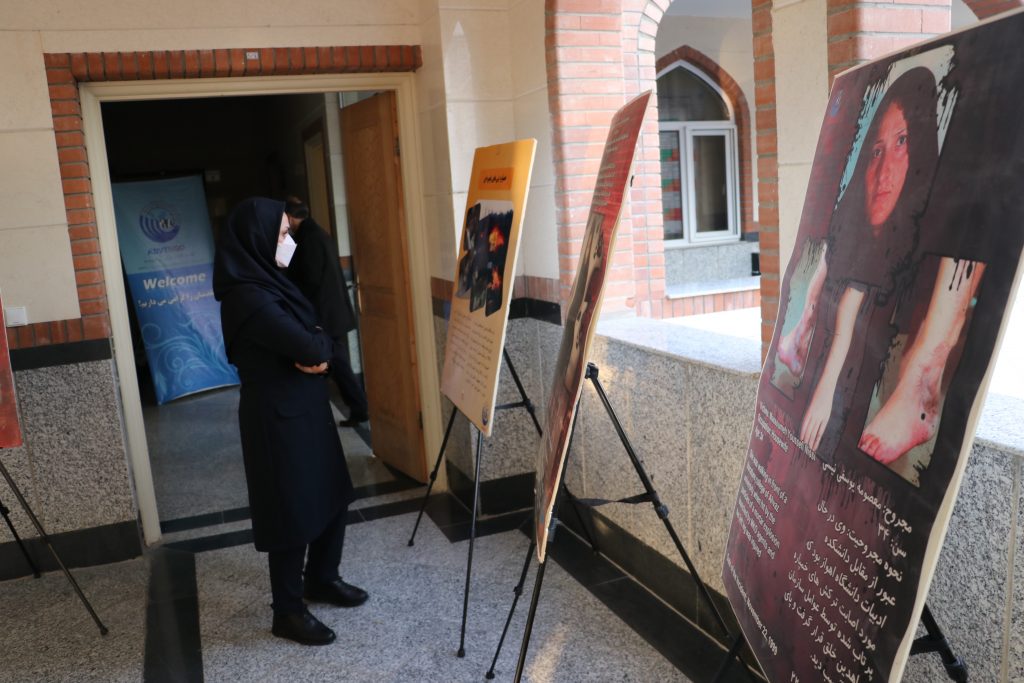 Ms. Fatemeh Mijbil affected by ISIS terrorism in Iraq said, “I had been pregnant for 8 months when the terrorists put an explosive device in front of my house. The blast wave destroyed my house. After the accident, the doctors said that my daughter would live only three days, but thank God she survived but suffered from cerebral palsy.”

She added, “I think about that incident every day and whenever I look at my daughter I remember that terrorist act.”

Next speaker, Ms. Zohreh Haghpanahi injured of a terrorist attack said, “I was injured in a bombing in Tehran.  Now I feel all the symptoms mentioned about the PTSD with all my being. I could not enter the community after the incident and I was afraid of facing people. Slowly, with the help of my family, I was able to return to the community, go to university, and now serve as a teacher.” She also said, “Women are the guardians of society and its real architects and they are so valuable that God has awarded them the mother role.” She added, “We must be united and work for freedom and justice, regardless of differences between nationalities and ethnicities and eliminate terrorism from the societies.” Ms. Haghpanahi concluded, “We can achieve this goal with unity among women victims.”

After her, Ms. Golrokh Mehri, a Zoroastrian compatriot and terrorism veteran, said, “I was the target of a terrorist explosion by the Hypocrites (MEK) at the age of thirty. Still do not know why this happened and I leave the perpetrators of that crime to divine justice”.

In continue, Ms. Habibeh Golestani, a victim of terrorism and a women’s rights activist in Afghanistan, stated, ” Unfortunately, since March 4, 2020, when the issue of peace in Afghanistan was raised and the issue of the Taliban-US agreement was proposed, not only war did not stop, but also it became so hot that it hit us alley to alley and house to house. Terrorism targeted individuals, people in groups, and different class of people. Accordingly, we bought a piece of fourteen-meter white cloth and gave it to the women at the Association of Social Women so that they can collect signatures. We wanted to say we are tired of the war and the conflict and call on the parties to stop fighting and pay attention to peace.

In another part of the meeting, Ms. Farideh Shafei described her injuries from Saddam’s chemical attack on Sardasht. She said that in 1987, Sardasht was first attacked with chemical weapons by the Ba’athist regime in Iraq. Mustard and nerve bombs were used in crowded parts of the city and defenseless people were affected, which resulted in hundreds of dead and injury of thousands of people due to exposure to toxic and hazardous gases. She continued, “The destructive effects and the ominous consequences of this tragedy were so bad that after thirty three years, it still casts a shadow over the sick and disabled people, especially children, and they still have a lot of problems. Sarcastically, the international community and the United Nations have never condemned Iraq because of this crime.

Ms. Shafei added, “I had to go abroad because of the severity of my injuries. One of my children was martyred in that attack and the other two children were affected, and I was the mother of a martyr and two children affected by chemical weapons.”

She concluded, “Terrorism is condemned anywhere and in any form. We hope that the international community recognize the victims. We hope to see a day when peace, tranquility, uniformity and justice will prevail in all societies and we will not witness so many crimes and injustices.”

At the end of the meeting, the statement of the Association Defending Victims of Terrorism on the occasion of International Women’s Day was read. In one part of this statement, we read, “Women are the most important pillar of human community, who have the highest role in regulating society as a mother, and the strengthening of the world depends on this exceptional creature.

Moreover, other activities of the meeting included displaying a video clip and holding an exhibition about women victims of terrorism. 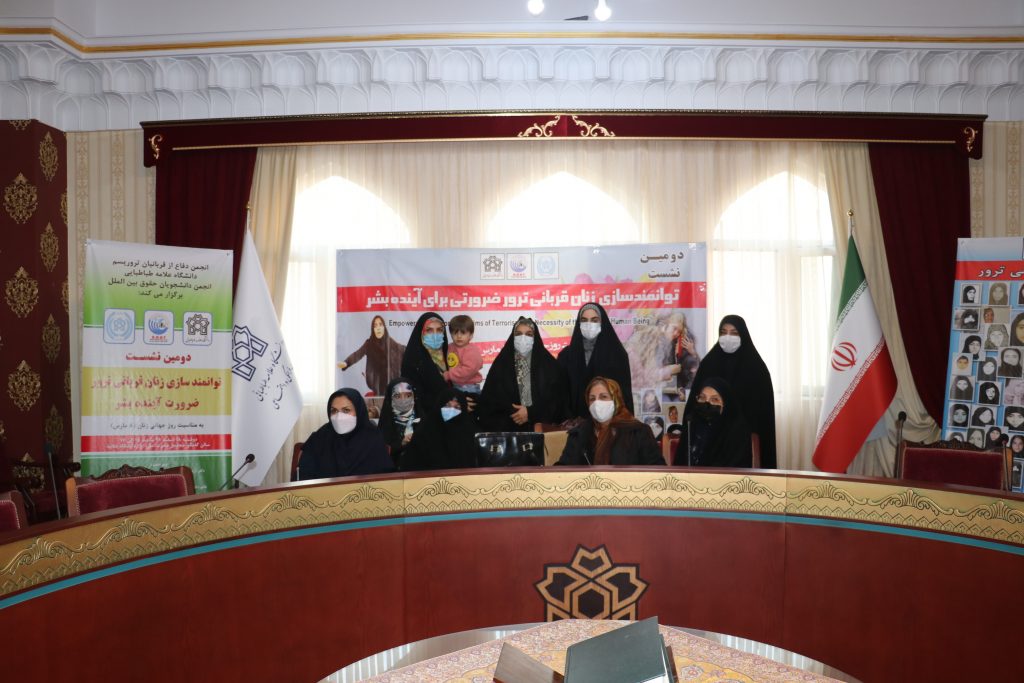 Tags: association for defending victims of terrorismWomen Victims of Terrorism