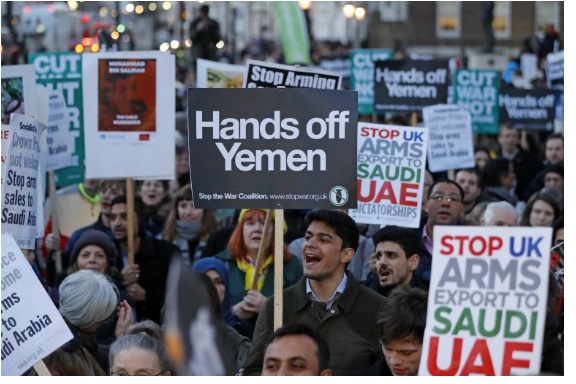 No end of Sales of western weapons against Yemeni people

Association for Defending Victims of Terrorism – based on Aljazeera report, nearly two months after the United States announced it would halt “offensive” support for the Saudi-led coalition in Yemen, as well as “relevant” arms sales, the administration of President Joe Biden has offered little clarity on how it will define those parameters.

But several weeks after Biden’s announcement, advocates outside of the US say little has changed.

“In terms of arms sales, we’ve got six years now of the United Kingdom with shockingly high sales figures, licensing figures and absolutely no indication whatsoever, that that’s going to change,” said Martin Butcher, policy adviser on arms and conflict with Oxfam International.

The UK accounted for nine percent of Saudi Arabia’s weapons imports from 2016 to 2020, second only to the US at 79 percent, according to the Stockholm International Peace Research Institute (SIPRI).

Saudi Arabia, meanwhile, accounted for 32 percent of the UK’s weapons exports during the period, the largest share of any country the British government exported to.

Since March 2015, the UK has licensed more than $9.3bn worth of arms to Saudi Arabia, according to the Campaign Against Arms Trade (CAAT).

Katie Fallon, the parliamentary coordinator for CAAT, said while the Biden administration’s announcement “ hasn’t actually had a real-world impact yet”.

Such an impact, she said, could come if the US review finds the Saudi-led coalition committed violations of international law involving foreign weapons.

“For the US to do something that would have impact here, it would be to categorically point out and accept that that these violations have occurred,” Fallon told Al Jazeera.

The war in Yemen entered its sixth year with thousands of civilians killed and a humanitarian disaster pushing 13.5 million people to the brink of starvation.

Germany and the government of Wallonia, a southern region of Belgium, have also imposed bans on arms sales to Saudi Arabia in recent years, France, Spain, and Australia, meanwhile, have resisted calls to end sales.