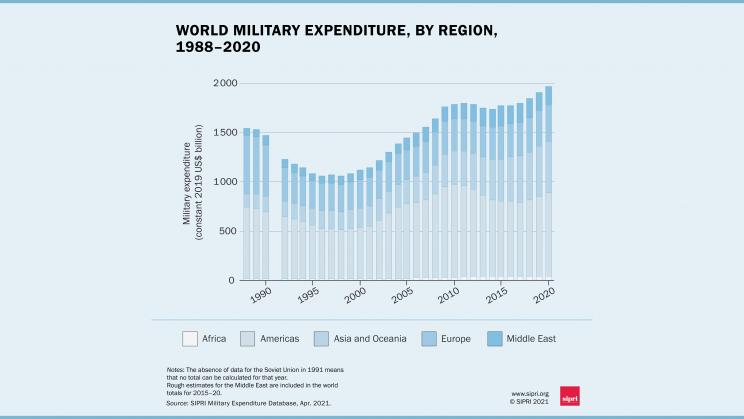 Association for Defending Victims of Terrorism – SIPRI reported, total global military expenditure rose to $1981 billion last year, an increase of 2.6 per cent in real terms from 2019.

The five biggest spenders in 2020, which together accounted for 62 per cent of global military

expenditure, were the United States, China, India, Russia and the United Kingdom.

Military spending by China grew for the 26th consecutive year.

crisis in 2009.Even though military spending rose globally, some countries explicitly reallocated part of their planned

‘We can say with some certainty that the pandemic did not have a significant impact on global military spending in 2020,’ said Dr Diego Lopes da Silva, Researcher with the SIPRI Arms and Military.

In 2020 US military expenditure reached an estimated $778 billion, representing an increase of 4.4 per cent over 2019. As the world’s largest military spender, the USA accounted for 39 per cent of total military expenditure in 2020. This was the third consecutive year of growth in US military spending, following seven years of continuous reductions.‘The recent increases in US military spending can be primarily attributed to heavy investment in research and development, and several long-term projects such as modernizing the US nuclear arsenal and large-scale arms procurement,’ said Alexandra Marksteiner, a researcher with SIPRI’s Arms and Military Expenditure Programme.

Germany increased its spending by 5.2 per cent to $52.8 billion, making it the seventh largest spender in 2020.Germany’s military expenditure was 28 per cent higher than in 2011.