Home News Unveiling “Sunset in the Sunset” Painting: Narrative of the Oppression of Martyr Anis Nouri 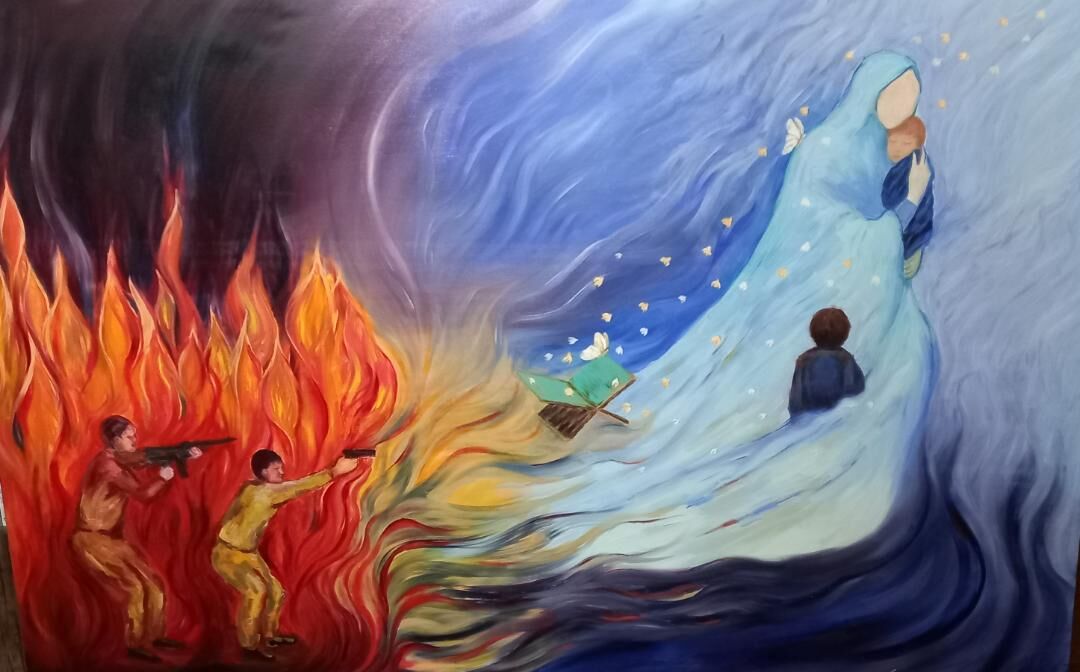 Unveiling “Sunset in the Sunset” Painting: Narrative of the Oppression of Martyr Anis Nouri

The Association for Defending Victims of Terrorism – The unveiling ceremony of the painting “Sunset in the Sunset”, and the commemoration of the martyr Anis Nouri was held by the Association for Defending Victims of Terrorism in collaboration with the Gilan Foundation of Martyrs and Veterans Affairs. It was attended by officials of Gilan province and the family of the martyr in the girls’ school of Shahid Anis Nouri in Roudsar on 15th Ramadan (28th April).

At the beginning of the ceremony, Mr. Foroutanpanah, the moderator of the ceremony, described the assassination of Ms. Anis Nouri. He said, “Anis Nouri was martyred on the 15th of Ramadan (6 July 1982) and during the heavenly time of Iftar due to the attack of the hypocrites on her house. She, her husband, and two children, aged four and five, were waiting for the muezzin at the table. She heard the sound of the bell of the house. She saw a man with a bowl in one hand and a Colt gun in other hand while he was ready to shoot. There was another man with a J3 gun ready to attack. Martyr Anis Nouri shouted and called her husband and stands in front of the attackers. At this moment, one of the attackers entered the house by firing four bullets while her daughter, Zahra was bleeding. Martyr Anis Nouri tried to save her child, but the attacker fired at her and Ms. Nouri fell down. Then the attackers threw a gasoline container on the floor of the house and ran away, but while fleeing, they threw a lighter into the house. Therefore, flames cover the space of the house.”

Then, Mr. Rostampour, a veteran of the holy defense era and an activist in the field of martyrdom, appreciated the Association for Defending Victims of Terrorism for organizing this meeting and said, “We must commemorate the memory of the martyrs because seventeen thousand innocent people from different groups in the country have been victims of terrorism and no attention is paid to these martyrs.”

In another part of the ceremony, Hojjatoleslam Hadi Habibi, the Friday Imam of Roudsar, congratulating the birthday of Imam Hassan Mojtaba (PBUH), introduced Ms Anis Nouri as a victim of the Kharijite assassination and stated that the hypocrites, are similar to the Kharijites and they show themselves in the society in a good appearance and then they undermine the goals and ideals of that society by any means. In Surah An-Nisa’, verse 145, God says that the hypocrites are in the worst parts of the hell. In our country, despite thousands of shameful cases of assassination of innocent people such as the Martyr Anis Nouri, they finally fled to France and took refuge in that country despite their claims of democracy and defense of human rights.

Mr. Yaghoub Estilaf, the wife of Martyr Anis Nouri said, “I appreciate all those involved in this ceremony, especially the Association for Defending Victims of Terrorism. The host moderator told the story of my wife’s martyrdom, but I want to say that this meeting is not only about the cruelty of the hypocrites against a housewife, at the Iftar table, but it is also about the description of the cruelty of the hypocrites against the Iranian nation. The cruelty that has remained in history and the Iranian nation will never forget these cruelties, and even the opponents of the Iranian government hate the hypocrites who allied with Saddam.”

He added, “The hypocrites have no place among the Iranian people and not only in Iran, anywhere else in the world, and they are known as terrorists, and the Iraqi people expelled them and they had to reside in Albania.”

Martyr Anis Nouri’s husband thanked Mr. Aghaeipour and the provincial and city officials of Gilan, and asked the provincial officials not to be content with such ceremonies and think about the naming of urban thoroughfares after this martyr in order to reduce the pain of the oppression of this martyr. Take a step towards honoring the martyrs of assassination as much as possible.

In another part of the ceremony, Mr. Mohammad Reza Davtaleb, Deputy of Culture of the Martyr and Veterans Afairs Foundation of Gilan Province, stated, “With such crimes, it can be said that the hypocrites are the worst group in the history of Iran and today the rightfulness of Martyr Anis Nouri has been proven. She was martyred alongside his family in a city far from the battlefield and at the Iftar table while the whole country was defending against Saddam’s aggression.

Next, the painting “Sunset in the Sunset”, with dimensions of 1.5 by 2 meters, the work of Gilani artist Mr. Hossein Aghaeipour was unveiled.

Mr. Hossein Aghaeipour, the creator of this artistic work, said about the painting, “Art is a cry of commitment in sympathy with society and protesting against the social evils that arise from the passionate heart of the artist to lead the turmoil and irritation of human life to the shore of peace.”

He added, “By displaying the works of violence and extremism, the artist can make the world more aware of the realities of this sinister phenomenon and make the society have a clearer view of the lasting effects and consequences of this calamity of the century. The artist has a duty to use his tools to send the best message to the world to fight against any evil.”

Mr. Aghaeipour added: “Terrorism has victimized all over the world for many years and there is almost no society that has not been affected by the evil of this heinous phenomenon. In addition, Iran is one of the countries that has suffered a lot in this regard, and therefore, it is important to inform our society and the world about these tragedies. Because sometimes, over time, the crimes of terrorists are hidden among various news.

Mr. Aghaeipour continued, “Today, the painting of the Sunset in the Sunset is the story of a mother who was martyred by devils in previous years. This painting tries to narrate an incident that happened many years ago, during Ramadan in 1982, during Iftar, but its pain still remains on the body of society and is painful. This painting seeks to express the fact that the fire that the devils kindled descends on them and shows that, like the case of Abraham, the flames of the criminals are extinguished on the innocent.

At the end of the ceremony, by paying tribute to the great status of this great martyr, a plaque of appreciation was awarded to this committed artist for his efforts.

Tags: Sunset in the Sunset