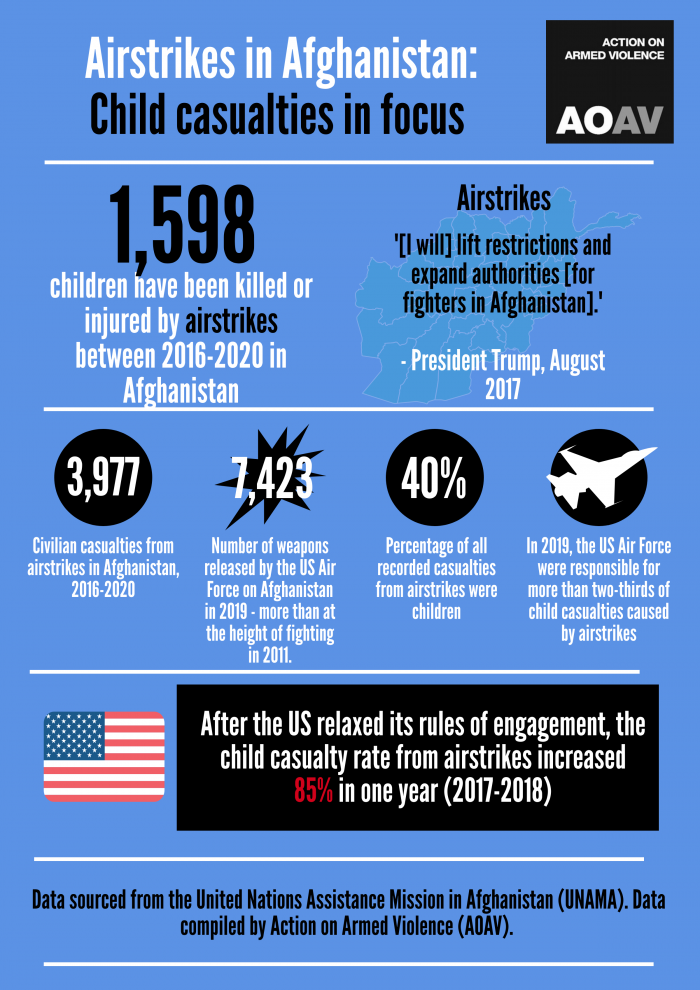 Association for Defending Victims of Terrorism – based on AOAVA, nearly 1,600 children killed in the past five years

In the past five years, 40 percent of all civilian airstrike casualties in Afghanistan were children, new figures show.

“Sadly, these numbers are no surprise,” said Chris Nyamandi, country director for Afghanistan at Save the Children International. “Afghanistan has been the deadliest country for children for years.”

Leading up to the departure of US-led forces expected later this year, casualties from international coalition airstrikes more than tripled from 247 in 2017 to 757 in 2019, according to data (PDF) from United Nations Assistance Mission in Afghanistan (UNAMA).

Nyamandi said for the past 14 years five children were killed or maimed in Afghanistan every single day.

“These are gut-wrenching numbers when you realise that these were children with futures, families, children who went to school and just wanted to live their lives in safety,” he said.

Iain Overton, executive director of Action on Armed Violence, said in 2018-19 the US military dropped more munitions on Afghanistan than at the height of bombing in 2011 – a rate of more than 20 a day. Such heavy bombardment resulted in the deadliest year of airstrikes for children in Afghanistan on record.

In 2018, there was an 85 percent increase from the year before, resulting in a rate of four child casualties every three days. The majority of these child casualties, 57 percent, were caused by US-led international forces.

“Children in Afghanistan live in constant fear of dying, or seeing loved ones killed – either from the air, or by a roadside bomb,” said Nyamandi.