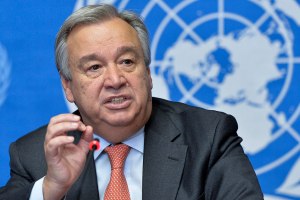 Association for Defending Victims of Terrorism – UN website reported, the past ten days have witnessed a “dangerous and horrific” surge in deadly violence in the Occupied Palestinian Territory (OPT), particularly Gaza, and in Israel, the UN chief told the General Assembly on Thursday.

“If there is a hell on earth, it is the lives of children in Gaza” ,Secretary-General António Guterres said, expressing deep shock at the continued air and artillery bombardment by the Israeli Defence Forces in Gaza that has so far claimed the lives of more than 200 Palestinians, including 60 children, and injured thousands more.

Appealing to all parties to “cease hostilities”, the UN chief underscored: “The fighting must stop immediately”.

“The fighting has…forced over fifty thousand people to leave their homes and seek shelter in UNRWA (the UN relief agency for Palestine refugees) schools, mosques, and other places with little access to water, food, hygiene or health services”, lamented the top UN official.

He said he was “deeply distressed” by damage to UN facilities, upholding that “humanitarian installations” are “inviolable”, including during armed conflict.

Mr. Guterres said he was working on releasing cash from the Central Emergency Response Fund (CERF), and the UN’s relief chief intends to release $14 million from the Humanitarian Fund for the Occupied Palestinian Territories.

He also stressed that “rapid and unhindered access for humanitarian aid” must be allowed into Gaza.

Rules of war preserve “first and foremost” the protection of civilians, said Mr. Guterres, urging Israel to abide by those governing armed conflict and to “exercise maximum restraint” in its military operations.

Mr. Guterres called on the international community to do everything in its power to enable the parties to “step back from the brink” and on the parties themselves to allow mediation efforts to intensify to “bring the fighting to an end”.

Reminding that today’s “horrific events” must be viewed in the context of “decades of military occupation, political deadlock, grievances and hopelessness, and a failure to address the core issues at the heart of the conflict”, the UN chief called a revitalized peace process “the only route to a just and lasting solution”.

“Yet when it comes to Israel and Palestine we are clearly failing”, said the General Assembly President Volkan Bozkir. “I call on both sides and the international community to take real steps to stop the vicious cycle of violence and to end the occupation. To defend human rights”.

Noting that the “Question of Palestine” is the longest standing issue on the UN peace and security agenda, he said that the occupation, compounded by political impasse and lack of negotiations, is “the main underlying source of instability and perpetuation of the Israeli-Palestinian conflict”.