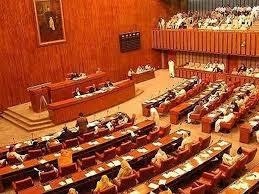 In the Senate session presided over by Chairman Sadiq Sanjrani, the House discussed a motion jointly moved by Leader of the House in Senate Dr Shahzad Waseem and Leader of the Opposition in Senate Yousaf Raza Gillani against Israel.

“—the Senate may discuss Israel’s systematic assault against Palestinian worshippers in the Haram-al-Sharif (Masjid Al-Aqsa) during the holy month of Ramazan and Israeli apartheid state’s terrorism and mass murder in Palestine, as well as the ongoing violent and illegal occupation of Palestinian lands in the world’s worst example of settler colonialism,” the motion read.

Speaking on the motion, Dr Shahzad said the United Nations Security Council (UNSC) failed to take on Israel’s terrorism on Palestine and an emergency meeting of UN General Assembly had to be called.

Shahzad said human rights organisations need to play their role and war crimes committed by Israel should be taken into the International Court of Justice (ICJ).