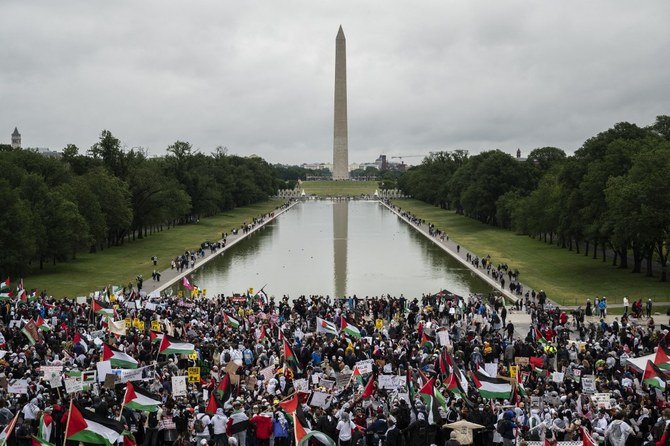 Thousands rally in Washington DC in support of Palestine

Association for Defending Victims of Terrorism – Arab News reported, thousands of people from all over the US converged on Lincoln Memorial in Washington DC on Saturday for the National March for Palestine.

Speakers demanded that the US government sanction Israel for its aggression and discrimination against the Palestinians, and for committing “war crimes” during its latest war on Gaza.

At least 254 Palestinians were killed, including 66 children and 39 women, and 1,910 wounded, according to the Health Ministry in Gaza. Twelve people in Israel were killed.

American Muslims for Palestine (AMP), one of the main organizers of the march, said it has developed a grassroots campaign titled “Sanction Israel” that aims to press the US government to hold Tel Aviv accountable for its human rights violations and its occupation of Palestinian territories.

“Millions of Americans around the country are joining to say there must be an end to this ugly, immoral and illegal status quo,” Osama Abuirshaid, executive director of AMP, told Arab News.

The protest is one way to assert the Palestinians’ “inalienable right to life, dignity, freedom and justice,” he added, criticizing the Biden administration for going ahead with licensing $735 million in weapons sales to Israel despite a public outcry and opposition from some members of Congress.

Jinan Shbat, national organizer for the Arab-American Anti-Discrimination Committee (ADC), which participated in the protest, told Arab News that it was a milestone for pro-Palestinian activism in the US in terms of the size and diversity of the crowd, which included Jewish, African-American, and other ethnic and religious groups.

“For so long, our tax dollars have funded the ethnic cleansing of the Palestinian people,” she said. “We came today so we can say it loud and clear to this administration that we as Americans will no longer be complicit in funding these atrocities.”