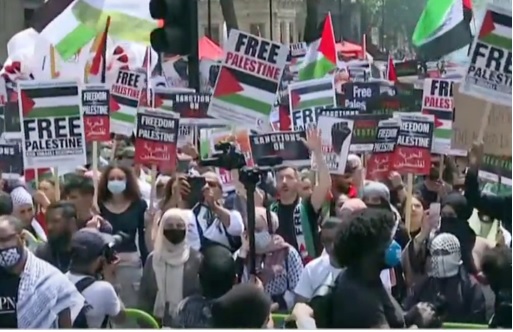 UK-made weapons are killing civilians, including children, in conflicts abroad

Thousands of people have attended a pro-Palestine solidarity march in London, calling on the Group of Seven (G7) leaders currently meeting in southwest England to support Palestinian rights.

As part of the “Resist G7: Day of Action for International Justice” rally, demonstrators on Saturday marched towards Prime Minister Borris Johnson’s official residence in Downing Street, chanting and holding placards to protest Israel’s policies in the occupied Palestinian territory.

The protesters demanded an end to what they said is complicity in Israel’s war crimes against the Palestinians by the United Kingdom and other G7 governments.

“At today’s Justice For Palestine demonstration in London, I also called for a halt to arms sales,” Corbyn wrote on Twitter. “UK-made weapons are killing civilians – including children – in conflicts abroad. This must stop,” he said.