Home News European weapons in stockpiles of terrorists in Africa 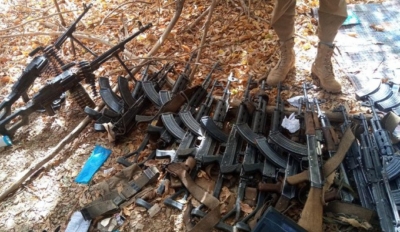 European weapons in stockpiles of terrorists in Africa

Association for Defending Victims of Terrorism – Amnesty International’s arms experts have identified Serbian-manufactured weapons in videos posted by armed groups operating in the Sahel, including an Islamic State affiliate which has claimed responsibility for hundreds of civilian deaths.

The new rifles, some the latest available models, match trade records of Serbia’s sales to Burkina Faso, suggesting the weapons were recently sold to the government before falling into the hands of armed groups.

By 2020, when Serbia made its latest reported arms transfer to Burkina Faso, violence between armed groups was already well underway.

“The conflict in the Sahel has been characterized by serious human rights violations by all parties, including massacres of civilians by unaccountable armed groups. More than a million people have been displaced in the region, and the humanitarian crisis is fast becoming one of the worst in the world,” said Patrick Wilcken, Head of Business, Security and Human Rights at Amnesty International.

According to official EU annual report data, since 2013, EU states have issued 506 licences, worth 205 million euros, of military equipment to Mali and Burkina Faso.

“The Serbian weapons we identified are the latest evidence that any arms sold to governments in the Sahel region risk falling into the hands of brutal armed groups, and fuelling the worsening conflict,” said Patrick Wilcken.