Home News Roots of Violence and Extremism Side-Event was Held 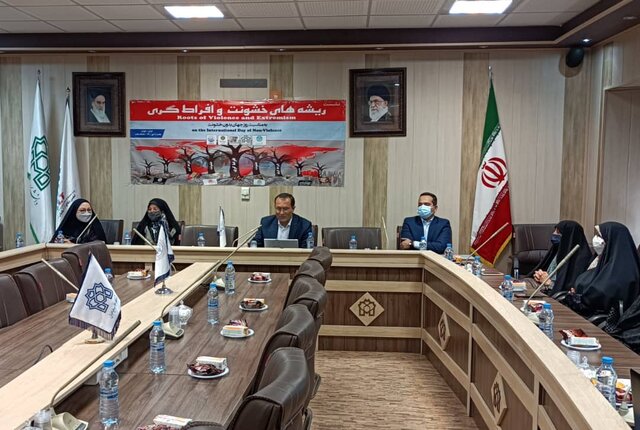 Roots of Violence and Extremism Side-Event was Held

Association for Defending Victims of Terrorism in cooperation with Allameh Tabataba’i University, Tehran University and Melal Cultural Center held a side-event on the International Day of Non-Violence during the 48th session of the Human Rights Council. The title was “Roots of Violence and Extremism” and was attended by university professors, national and international figures, and families of the victims of terrorism at Faculty of law and Political Sciences of Allameh Tabatab’i University.

In this event, Dr. Heybatollah Najandimanesh, faculty member of Allameh Tabatab’i University welcomed the participants and professors and said, “Due to the unilateral perspective to international affairs, it has become defective and the nations don’t trust it. At the center of this system is the United Nations and if this mechanism is untrustworthy, actually the basis of the system will be untrustworthy.” He added, “Perspective to the world should be multilateral. We should find common things and learn how to live peacefully.”

Dr. Najandimanesh continued, “The cycle of violence must stop otherwise the world affairs will be more complicated. The main problem is about those pretend to defend the human rights but support extremism in practice.”

Next speaker, Mansoureh Karami, member of the Board of Director of ADVT stated, “The most important thing is the change of the viewpoint. Unless we change our viewpoint, extremism and violence will exist and the United Nations should address the issue.”

Ms. Zohreh Haghpanahi, member of the Board of Director of ADVT read the message of the UN Secretary General, Antonio Guterres. In a part of the message is “It is no coincidence that we mark the International Day of Non‑Violence on the birthday of Mahatma Gandhi.  The solution to these challenges is in our hands:  solidarity.  We need to recognize, as Gandhi did, that what unites us is far greater than what divides us.  That peace provides the only pathway to a better future for all.”

In the Message it is also said, ” We call on combatants around the world to lay down their arms and focus on defeating humanity’s common enemy — COVID‑19 — not one another.  Most of all, we need to renew trust in one another.  Hatred, division, conflict and mistrust have had their day.  It is time to usher in a new era of peace, trust and tolerance.”

Next speaker, Dr. Fereydoun Jafari, faculty member of Bu Ali Sina University of Hamedan said about the effect of impunity on the spread of violence and extremism, “Extremism is the diversion from the accepted formal and informal norms.”

He concluded, “If the national and international criminal courts try such acts, the fear of the punishment can root out violent acts.”

He added, “Is the economic sanction a kind of extremism? Does lack of vaccine lead to unilateralism and violence?” He added, “What is going on in Afghanistan and in the neighbors in northwest of Iran and the Occupied Palestine are examples of unilateralism. Today, international law has been replaced with international politics. We cannot have an effective output unless we don’t do anything about examples of violence and extremism.”

Addy Daniyal, priest of Ashour Church of Urumieh spoke about anti-religionism as an element of spreading violence and extremism and said, “Our conceptions and readings of religion can result in takfiri and terrorist groups. Such approaches are based on the rage for protection of religion, but it is an immoral rage.” He added, “The human of today has the previous mistakes. Anti-religionism and extremism are eradicated when human beings have a right conception of God.”

Dr. Morteza Moheghi, faculty member of Gharjestan University spoke about lack of thought and culture and the roots of violence and extremism. He said, “Cultural factors can be effective in spreading violence and extremism and the education systems may play role in restraining it. Removing the aggressive materials, and teaching critical thinking and countering extremist propaganda and encouraging tolerance of others’ beliefs can be effective”.

He concluded, “We should try to rule out the thought of violence and extremism otherwise violent people always exist and we should counter the sacred ignorance.”

Dr. Omid Maleki, professor of international relations, spoke about utilitarian perspective to terrorism and political interest and emphasized, “The reason why terrorism continues to spread is due to the fact that it has a special function in the world. Actors who pretend to be the leaders of freedom, equality and justice, in fact support terrorism and make the terrorists active actors at international level. ”

He added, “Terrorism is complicated and terrorist groups are unpredictable and self-supporting and fraud because they talk about God and defending religion, but actually they commit any kind of act. In sum, terrorists are pretenders who seek their interest.” He added, “Terrorist acts imposed billions of dollars on the world economy and the Middle East suffered more”.

Executive director of World Beyond War added, “Studies have found 95% of suicide attacks to be motivated by ending a foreign occupation. If you don’t want to see any more suicide terrorist attacks in the world , and you’re willing, toward that end, to kill millions of people in wars, to create the biggest refugee crisis ever, then you must really have a very strong attachment to foreign occupations of other people’s countries.”

At the end of the event, some of the families of those affected by terrorism narrated their experiences about the roots of terrorism. They said their experiences are different but in one aspect they are the same. The connection of all of the terrorist attacks is originated from the issue of asylum in the West and the policy makers in the West should be notified not to support the terrorists by granting asylum status to them and root out this type of spread of violence.

Tags: association for defending victims of terrorismRoots of Violence and Extremism