Home News Mother of victim of terrorism to terrorist: What did you gain from killing them? 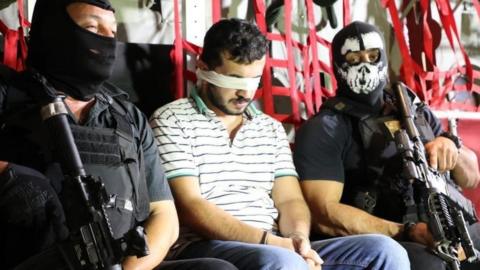 Mother of victim of terrorism to terrorist: What did you gain from killing them?

Muhsin Skheir Gzar, 70, lost his 25-year-old son in the 2016 bombing in Baghdad’s Karradah commercial district. He broke down in tears while talking to ‘The National’. Photo: Sinan Mahmoud / The National

“Despite the deep sorrow that I have been living with, I was happy when I heard the news,” 70-year-old Muhsin Skheir Gzar’s, who lost his son, told The National.

“It was a criminal and heinous act,” Mr Gzar said, his voice quivering.

“The incident has made me look older than my real age by at least 25 years,” he said, sitting in a small cafe near the site of the bombing. “Pain and sorrow have not abandoned us and everything is bleak around us since then,” he said, wearing a black dishdasha, a sign of mourning. “I have not forgotten my son in a single day all these years,” he added.

In an interview with Al Hadath Television network, Al Zobai said he was an Al Qaeda militant when he was imprisoned by the Americans in Iraq at the Camp Cropper prison until 2008. He escaped from Abu Ghraib prison in 2013 during a mass jailbreak, when hundreds of prisoners escaped, and then joined ISIS.

In a video, he was confronted by one of the mothers who had lost her son in the Karradah attack.

“You didn’t think about the families of victims that you killed? The men and women did not do anything wrong in life,” she told Al Zobai, as he stood with his head down.

“We need to know who financed and planned for this attack and others from behind the borders,” said Ghanim Oraibi, 60, who lost his son and son-in-law.