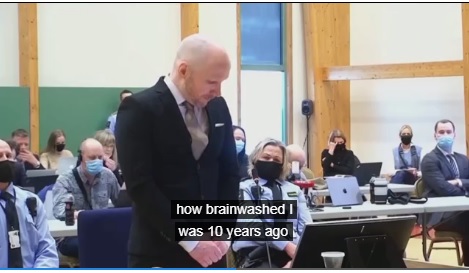 “I was brainwashed”: Norwegian mass murderer

He killed eight with a car bomb in Oslo and then gunned down 69, most of them teenagers, at a Labour Party youth camp.

Addressing the court, Breivik blamed his crimes on online radicalization, which he said had motivated his attacks.

“I was brainwashed,” Breivik said.

Breivik, who described himself as a parliamentary candidate, also said that he would continue his fight for white supremacy and Nazi dominance, albeit via peaceful means.

Breivik, 42, is serving Norway’s maximum sentence of 21 years, which can be extended indefinitely if he is deemed a continued threat to society.

The Telemark court in Skien, southwest of the capital Oslo, where Breivik is serving his sentence, is hearing the case this week after the Oslo state prosecutor’s office last year rejected Breivik’s application for early release.

If his request for release is denied again, Breivik, who has changed his legal name to Fjotolf Hansen, can apply for a new probation hearing in a year’s time.