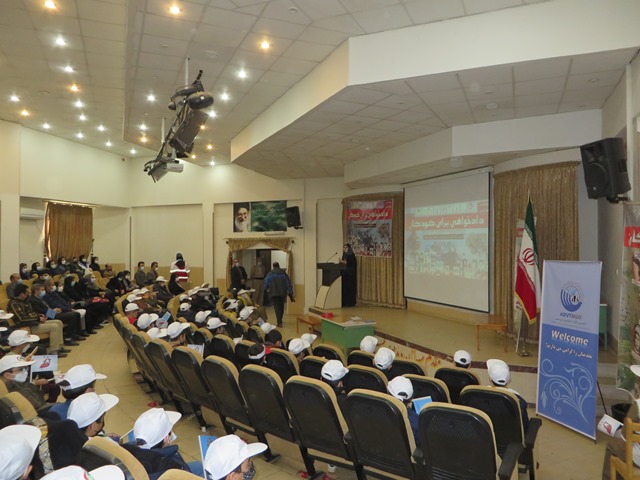 Association for Defending Victims of Terrorism in collaboration with the Children for Children Movement, the Association of Ambassadors for Peace and Friendship, Administration of Education, the Red Crescent Society, the Martyr and Veterans Affairs Foundation, the Sanandaj Municipality and the Sanandaj Children and Adolescents Intellectual Development Center held “Justice for Children” conference focusing on children, especially martyr Seyyed Farzin Hosseini, who was a child, to commemorate children affected by armed conflict and terrorism. In this event, human rights and children’s rights activists, city and provincial officials, and the families of the martyrs of terrorism of Sanandaj attended.

At the beginning of the event, which was held on the occasion of the 25th anniversary of the establishment of the United Nations Special Representative for Children and Armed Conflict, Ms. Manijeh Safiari, a representative of the Children’s Movement for Children, spoke on behalf of the child victim of terrorism. She stated that the child victim of terrorism is not a symbolic term and verbal metaphor to have theoretical discussions only on occasions. It must be acknowledged that these dearest ones of the universe have faced terrible and unfortunate sufferings that no words can describe it. The depth of the tragedy for the helpless and innocent children in the past decades is so unfortunate and heartbreaking that the recollection of those memories after decades is as painful as the time of the incident and hurts the human emotion.

In another part of her speech, the representative of the Children’s Movement for Children said, “I am an example of a child victim of terrorism of Saddam and the Hypocrites in Tehran Bazaar and Farzin Hosseini is another example of a child victim of Saddam and the Democratic Party in Kurdistan and Alan Kurdi is an example of the crimes of Obama and ISIS in Syria, and this process of damaging to children damage continues, and it will not be relieved with any ointment or any action.”

“On behalf of the Children’s Movement for Children, I say that children affected by terrorist tragedies and armed conflict are a mirror image of the human rights situation in the world today. We need a global uprising in support of these children so that all perpetrators, supporters, and facilitators should be prosecuted at international courts and the facts should be told.

Then, Dr. Soltani, a sociologist and member of the Red Crescent of the Islamic Republic of Iran, spoke about the phenomenon of terrorism, saying that Iran, and especially the Kurdistan Region, has suffered seriously from the phenomenon of terrorism. Terrorism has several characteristics. This phenomenon is accompanied by violence and there is no dialogue in it, the terrorists seek their own political benefit and in this way, they send messages to intimidate the society through their own terrorist acts.

The Red Crescent sociologist also spoke about the phenomenon of suicide bombings, saying that most of the suicide bombers were young and had been deceived by terrorist groups.

In another part of the conference, UN Secretary-General Antonio Guterres video message on the occasion of the 25th anniversary of the establishment of the United Nations Special Representative for Children and Armed Conflict was read by a child. In this message the Secretary General said 25 years ago, the international community called for bold action to end the suffering of children killed or maimed or used as soldiers in conflict, as well as violence, attacks on schools and hospitals, and end denial of access to vital humanitarian aid.

“We are proving step by step that child violations of children’s right can be stopped, but more effort is needed and children are still hurting,” the message continued.

Dr. Yazdani, a child psychologist, the next speaker at the conference, spoke on the subject of justice for children in Kurdish, saying that children should be happy and create works of art, but some do not want to see children happy and create fear through war and terror. To counter this, we need to create works of art from the victims to honor their memory, and we can do that by creating paintings of them,” he said. We can also make videos and clips or write letters to international organizations and complain about those who cause violence. “We must do our best to create a happier world for children,” he concluded.

In another part of the event, Ms. Maryam Karimi, the head of Afghanistan Children’s Charity, said about the child victims of terrorism in Afghanistan, “In the last two decades in Afghanistan we have witnessed countless suicides, explosions and wars in which many Afghan children are injured.”

“We have many cases of child victims of terrorism in Afghanistan who have lost their parents and family members have been disabled as a result of terrorist acts, and even worse, some of them have been breadwinners,” she said. “We also have mothers who have given birth to children with disabilities due to the stress of terrorist acts. I am also an example of the damage of terrorism and war that we have been displaced to other countries”, she added.

In another part of her speech, Ms. Karimi said, “We call on the international community to have plans for children affected by terror and war and to support them effectively and permanently, and we hope that we will not see an increase in the number of victims of terrorism, especially children in the world.”

In another part of the event, the brother of martyr Seyyed Farzin Hosseini stated in a story about his brother, “Seyyed Farzin Hosseini was one of the victims of the rage of terrorist groups who was martyred on 7 May 1980 as a result of a mortar shell fired by the Democratic Party terrorists. My brother was playing with his friend when he was eight years old, but his laughter stopped forever with the weapons of the Democratic criminals.”

In this event, one of the members of the Children’s Intellectual Development Center presented the life story of Martyr Farzin Hosseini to the children in childish language. The video clip “Justice for Children” was screened and a song was performed by students of Sanandaj. Children’s diaries addressed to Seyyed Farzin Hosseini were also read by students.

At the end of the event, the family of Martyr Farzin Hosseini was commemorated and the students at the event raised the flags of justice for children to support the ideals of defending the child victims of terrorism and the statement for children was read by one of the students. A photo exhibition entitled “Children’s Voice” was held on the sidelines of the conference.