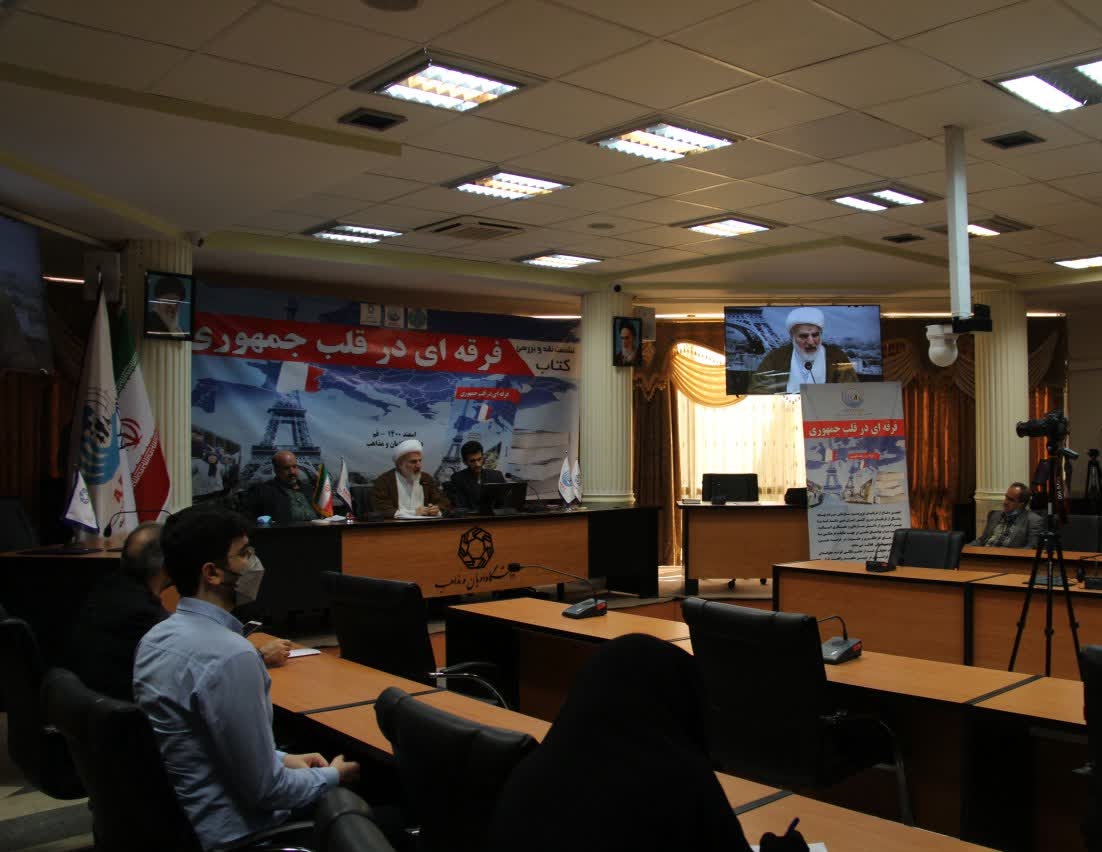 Unveiling of “A Sect in the Heart of the Republic”

The Association for Defending Victims of Terrorism held a hybrid meeting at the University of Religions, in collaboration with the University of Religions and the Workers’ House, to unveil and review the book “A Sect in the Heart of the Republic” by Natalie Goulet, French senator and lawyer. It was attended by professors, academics, students and families of martyrs and veterans of terrorism.

At the beginning of the meeting, Mr. Mohammad Mahdi Moghadas, moderator of the meeting, stated, “Association for Defending Victims of Terrorism using organizational knowledge and in cooperation of academic institutions to counter the roots of extremism and violence in the national, regional and international arenas. The book we are unveiling and reviewing today is a research by Ms. Natalie Goulet, a lawyer and member of the French Senate, on the sectarian structure and nature of the Hypocrite terrorist group, based in the city of Auvers Sur-Oise on the suburb of Paris the of France,”. He added, “We want to raise public awareness, terrorist sect abuse of the social context as well as figures and elites and provide the grounds for the release of those caught in this sect.

Hojjatoleslam Mr. Navab, Chair of the University of Religions, said that terrorism and sedition are resulted from the context of sectarian structures and this is the method that sects use to achieve their goals.

He went on to say that sects have historically tried to impose their goals on human society by resorting to shocking terror and other hostile methods, which have never been able to achieve their goals in this way and they only caused harm to human community that will not be forgotten.

The president of the University of Religions continued to say, “We have gathered today to unveil a very good book about a murderous sect and worse than ISIS.” Worse because ISIS act apparently and start a war, but the Hypocrites act secretly. The Rajavi sect and the Hypocrites had no gift for humanity except death and destruction since their creation.

Next, Dr. Ruhollah Ghasemi, a member of the faculty of Shahid Beheshti University and translator of the book, pointed out some features of the book. He said in his intervention that this book seeks to clarify the sectarian truth of the group of Hypocrites in simple language and by using reliable sources and providing accurate statistics.

In another part of the meeting, Hojjatoleslam Mr. Taskhiri, International Vice Chancellor of the University of Religions stated that, according to the Holy Quran, hypocrites are always deceiving humanity, they think they can deceive everyone. If they deceive everyone, they cannot deceive God because God is aware of everything.

He continued to say that the Hypocrites started their activities while they had deviated from the religion of Islam. They were in contact with the Ba’athist regime in Iraq before the revolution, and after the Islamic Revolution, they committed countless crimes against the Iranian people and killed 17,000 of them.

In another part of his speech, International Vice Chancellor of the University of Religions stated that not only did they not act in the interests of the people, but they also helped the hegemonic states and the Ba’ath party in Iraq. They helped the Ba’athist regime in Iraq by spying and stealing information. They are also hated by the Iraqi people because they helped Saddam suppress the Shiites and the Kurds during the Shabanieh intifada.

In another part of the meeting, Mr. Hamzaei, the International Vice President of the Workers’ House of Iran, said, “I thank the author of this book and its translator for expressing these bitter facts so well.” He continued, “The crimes of the terrorist sect of the Hypocrites are not hidden from anyone. They violate conventions related to the prohibition of forced labor.

He added, “The group, in violation of international law and the principle of human dignity, deceived job seekers and transferred them to Iraq and Camp Ashraf with the promise of working in Europe and some of them were sent to Iran to carry out terrorist operations and those who did not cooperate were tortured in the prisons of the Hypocrites. And in the same book, it is said that most of the members have joined this group through the method of job seeking deception and a series of measures have been taken through the International Labor Organizations and labor NGOs in France, Albania and Germany to release them.

He said “Many people in other countries are not aware of the nature of this terrorist group. They attended conferences affiliated with the International Labor Organization, but they were prevented from entering due to the Workers’ House revelation.”

In another part of his speech, referring to parts of the book, Mr. Hamzaei said, “I call on the people to tell the truth so that the free thinkers of the world can become aware of the true nature of this terrorist group. We must inform the world and we must know that they are anti-human and anti-peace.”

In another part of the meeting, Mr. Mostafa Soleimani, a personality psychologist, examined the phenomenon of brainwashing in terrorist sects. He said “In the introduction of the book, Mr. Bani-Sadr, a former member of this terrorist group, says, “I honestly say that we were brainwashed, and that is why this phenomenon must be addressed.””

In another part of his speech, the personality psychologist said that a brainwasher tries to keep the person away from information sources and isolate him, because then he has found a good prey for his actions.

He went on to say that informing is an effective way out of this situation and said that we should inform the victim that he has been brainwashed because the victim denies the essence of the matter. And then we have to confront the victim with the facts

In another part of the meeting, Mr. Vahid Khalili, professor and expert on money laundering, referring to a chapter in the book entitled “Where are the Source of Money of the Hypocrites?” said that the book pointed out that in 2003, a police inspection of the group’s base in Auvers Sur-Oise seized $ 8.5 million in cash, without paying customs duties, as well as valid bank documents related to several international accounts containing about $ 10 million. Mr. Khodabandeh also says in a documentary called Secrets Behind Auvers Sur-Oise, which was also screened at the meeting, that in 2003 he wanted to transfer $ 2 million in cash from Iraq to Syria and then to France, where he was arrested in Syria and the money was confiscated.

He went on to say that the group’s funding sources are through illegal activities, espionage and fake charity institution. In the past, most of the group’s expenses were covered by Saddam’s government.

He further stated, “Considering the costly meetings and media programs of this group in European countries, it should be asked where these excessive costs are provided from. The group is currently in Albania, and since Albania is a gateway to money laundering in Europe and is not governed by money laundering laws, it can be said that the group is involved in money laundering, drug trafficking, human organ trafficking and other illegal activities.”

“Unfortunately, money laundering can also be seen on social media. In times of earthquakes and floods, they set up charities on Instagram and make a lot of money and they are also financed in this way. I ask the people not to be deceived and not to fall into the trap of them”, said the money laundering lecturer.

Jabbar Issaian, Judge and Professor of Kermanshah University, was the next speaker of the meeting. Regarding a part of the book on the terrorist case of this group in France, he stated that the arrest of Maryam Rajavi in ​​2003 was the largest anti-terrorist operation in the history of France. There were three reasons: criminal connection, preparation of terrorist operations, and securing terrorist activities. Such reasons showed that this sect was a terrorist group and that France was aware of it.

In another part of his speech, he stated that international conventions emphasize the need to counter terrorism and that is why governments have an obligation to fight it. Terrorism threatens international peace and security. International conventions provide three types of preventive liability for non-support of terrorism, non-financial support, and financing terrorism and counter-terrorism, which governments are obliged to implement.

He concluded that, “On this basis, the French government must counter the terrorist group of Hypocrites and has an international responsibility against this terrorist sect.

At the end of the meeting, Hojjatoleslam Taskhiri, International Vice Chancellor of the University of Religions, thanked the organizers of the meeting and expressed hope that these meetings would continue and be held on a larger scale at the regional and international levels.

Furthermore, in the presence of professors, figures and families of the martyrs, the book “A Sect in the Heart of the Republic” was unveiled by one of the victims of terrorism.