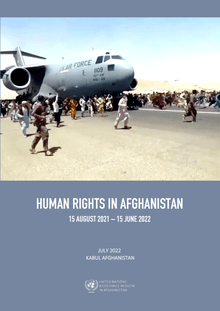 The report summarises UNAMA’s findings with regards to the protection of civilians, extrajudicial killings, torture and ill-treatment, arbitrary arrests and detentions, the rights of women and girls in Afghanistan, fundamental freedoms and the situation in places of detention. The report also contains recommendations to both the de facto authorities and the international community.

Despite an overall, significant reduction in armed violence, between mid-August 2021 and mid-June 2022, UNAMA recorded 2106 civilian casualties (700 killed, 1406 wounded). The majority of civilian casualties were attributed to targeted attacks by the armed group self-identified “Islamic State in Iraq and the Levant – Khorasan Province” against ethnic and religious minority communities in places where they go to school, worship and go about their daily lives.

Over the reporting period, UNAMA documented:

160 extrajudicial killings, 178 arbitrary arrests and detentions, 23 instances of incommunicado detention and 56 instances of torture and ill-treatment of former ANDSF and government officials carried out by the de facto authorities.

59 extrajudicial killings, 22 arbitrary arrests and detentions and 7 incidents of torture and ill-treatment by the de facto authorities of individuals accused of affiliation with self-identified “Islamic State in Iraq and the Levant – Khorasan Province”.