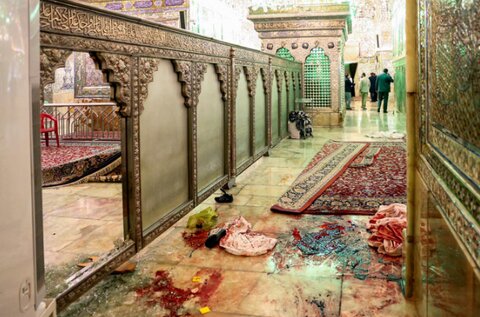 In a statement, the Association for Defending Victims of Terrorism condemned the terrorist attack on Shah Cheragh Holy Shrine (PBUH). In this statement we read:

Terrorism once again killed dozens of innocent men, women and children while they were praying in Shah Cheragh Holy Shrine (PBUH) in Shiraz and saddened hundreds of families in the separation and mourning of their loved ones.

This crime, like hundreds of other crimes committed by terrorists against religious centers and places of worship, shows that terrorism is not related to divine religions, but religions and religious centers, as an agent of solidarity and peace of society, have always been part of the goals of anti-religionists throughout history.

What military and strategic advantage attacking defenseless people can have while they are praying, except that it shows the cruelty and cowardice of terrorists who commit such terrible crimes to continue their disgraceful lives.

Takfiris and anti-religionists are considered a serious threat to global security and peace, especially in our region, which requires a global solution to weaken and eliminate these foundations as the intellectual driving force of terrorism.

Although the condemnation of this type of deplorable acts by states and international bodies is very valuable, the solution is to address the survival factors of this heinous phenomenon in the international arena in order to prevent the increasing number of victims and the infliction of very harmful damages on the developing countries.

Condemning this tragic crime and sympathizing with the mourning families and wishing health to the injured, the Association for Defending Victims of Terrorism calls on the UN officials, states and other activists in the national, regional and international arenas to strengthen cooperation and make appropriate decisions with the promoters of takfir and anti-religionism in a practical way to spread peace and security in the world so that humanity suffering from all these calamities will not witness the recurrence of such tragedies.