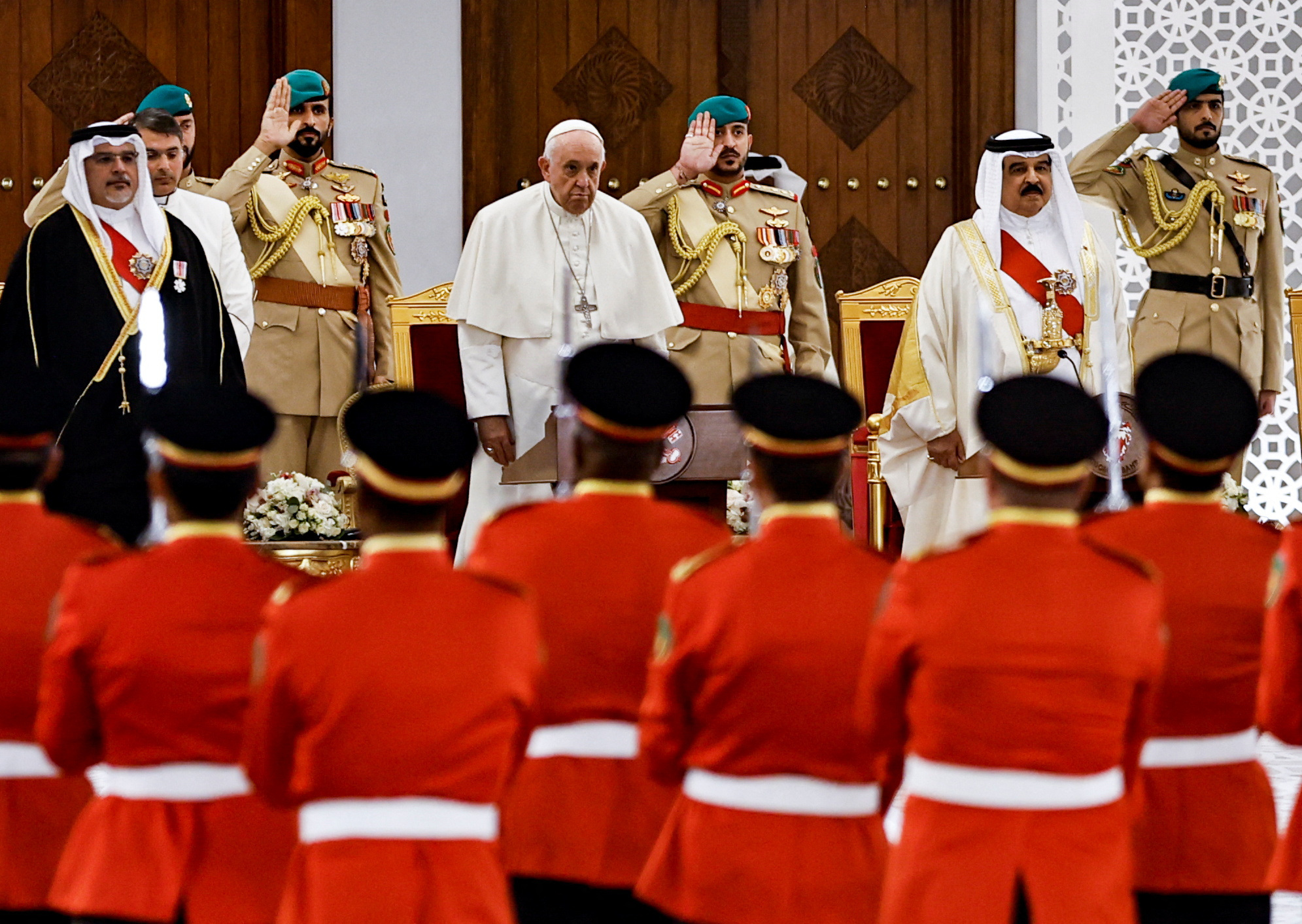 At the closing ceremony of the Bahrain Forum for Dialogue, Pope Francis speaks out against war and on behalf of true religious freedom, recognition of women, protection of children’s fundamental rights, and the concept of citizenship.

In a world run by narrow interests and war, the Pope says religious leaders must set a good example, and commit themselves to encouraging and assisting our wounded human family.

This theme was at the heart of Pope Francis’ address at the Bahrain Forum for Dialogue on 4 November in the Al-Fida’ Square of the Sakhir Royal Palace in Bahrain’s capital of Manama, during the Pope’s second day of his Apostolic Journey to the Kingdom of Bahrain.

“After two terrible world wars, a cold war that for decades kept the world in suspense, catastrophic conflicts taking place in every part of the globe, and in the midst of accusations, threats, and condemnations,” Pope Francis said, “we continue to find ourselves on the brink of a delicate precipice and we do not want to fall.”

The emergence of conflicts, he insisted, should not cause us to lose sight of the “less evident tragedies in our human family,” such as “the catastrophic inequality whereby the majority of people on our planet experience unprecedented injustice, the shameful scourge of hunger and the calamity of climate change, a sign of our lack of care for the common home.”

The Pope underscored the important role and responsibilities of religious leaders.

When it comes to such issues, the Pope said, “religious leaders must surely commit themselves and set a good example.

“We have a specific role to play,” he said, noting, “It is our duty to encourage and assist our human family.”

“It is not enough to proclaim that a religion is peaceful,” the Pope insisted, “We need to condemn and isolate the perpetrators of violence who abuse its name. Nor is it enough to distance ourselves from intolerance and extremism; we need to counter them.”

“Religious men and women, as people of peace,” Pope Francis added, “are likewise opposed to the race to rearmament, to the commerce of war, to the market of death,” and “do not support ‘alliances against some,’ but means of encounter with all. ”

The Pope invited religious leaders and those at the Forum to come together, for the sake of humanity, and in God’s name, and to “promote concrete initiatives to ensure that the journey of the great religions will be ever more effective and ongoing, a conscience of peace for our world.”

“The Creator,” he said, “invites us to act, especially on behalf of all those many creatures of His who do not yet find a sufficient place on the agenda of the powerful,” naming the elderly, unborn, poor, infirm, and migrants.

Pope Francis concluded by urging them to take their side and to make every effort to assist a “wounded and sorely tried” humanity.