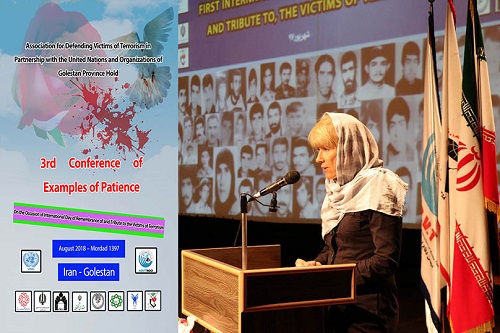 Association for Defending Victims of Terrorism – Conference of Examples of Patience was held on the occasion of First International Day of Remembrance of, and Tribute to the Victims of Terrorism in partnership with the United Nations Information Centre and organizations (UNIC) of Golestan Province. It was attended by Ms. Maria Dotsenko, UNIC Director in the I.R. of Iran, Dr. Gharibi, senior assistant to the Iranian Foreign Minister, Ayatollah Nour Mofidi, representative of the supreme leader on Golestan, and Dr. Seyed Manaf Hashemi, Governor of Golestan Province, Ms. Mansoureh Karami, vice-chairwoman of the Board of the Directors of Association for Defending Victims of Terrorism, and a number of the victims of Golestan spoke.

Ms. Maria Dotsenko read the UN Secretary-General’s statement on the occasion of the International Day of Remembrance of, and Tribute to, the Victims of Terrorism and said we must take a measure before a terrorist act occurs and that we should not act after the terrorist act. She added that we agree that we The United Nations condemns all forms of terrorism and seeks to unify the world to eliminate this heinous phenomenon.

She said that the United Nations plays an important role in supporting member states in implementing the Pillar I and IV of the Global Counter-Terrorism Strategies by providing solidarity with and supporting the victims, helping to build capacity, establishing networks and providing support to organizations, in particular the Victims of Terrorism civil societies and the encouragement of member states to promote, protect and respect the rights of victims. The United Nations is making efforts to provide resources, mobilize the international community and meet the needs of the victims of terrorism.

This year, the observance of the International Day of Remembrance of and Tribute to Victims of Terrorism (A/RES/72/165) represents a major step forward in standing in solidarity with victims of terrorism. By inviting Member States, the UN, international organizations and civil society entities to observe the Day,

attention to victims will be focused at the national, regional and international levels.

Dr. Gharibi, Senior assistant to the Iranian Foreign Minister stated that we are celebrating the important day in the calendar of international events and it is very important to pay attention to the capacities of the victims of terror to counter terrorism.

Golestan Governor Dr. Hashemi welcomed organizing the conference and congratulated the victims of terrorism of Golestan. Then he added that our country is the biggest victim of terrorism because 17,000 people were assassinated in Iran. But unfortunately, in the world, we see countries that claim to support human rights and fight against terrorism, are the main sponsors of terrorism.

Ayatollah Nour Mofidi praised the organizers of the conference and said that all nations must unite to fight terrorism.

It is a great pleasure for ADVT that after following up the issue for some years, the International Day was proclaimed by UN General Assembly. ADVT considers the commemoration of the victims of terrorism as the reaction for the condemnation and hatred of the crimes of terrorism against the human community and an indictment to prosecute the perpetrators of crimes in the public opinion of the world. ADVT calls on UN, figures, human rights activists, the educated, academics, and the elites of the world make effort to pave the way for introducing the victims as the paragons of patience, so that we can take an effective measure for isolating violence and extremism in the world.