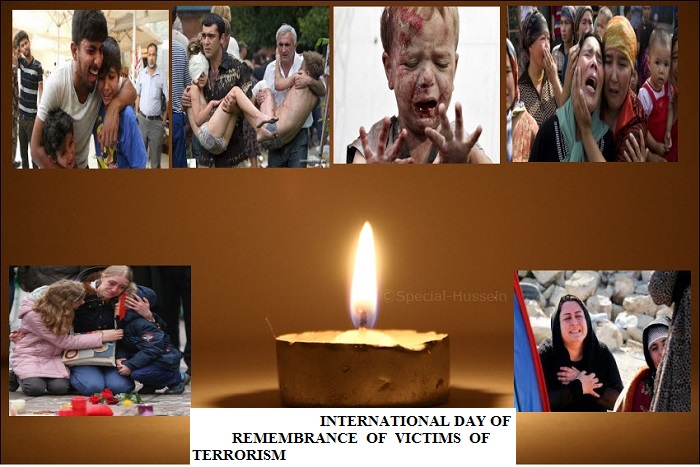 TRIBUTE TO, THE VICTIMS OF TERRORISM

MESSAGE ON FIRST INTERNATIONAL DAY OF REMEMBRANCE OF, AND TRIBUTE TO, THE VICTIMS OF TERRORISM

Terrorism is one of the most challenging issues of our time and a serious threat to international peace and security. From Tajikistan to the United Kingdom, from Baghdad to Barcelona, these ruthless attacks have shaken us all to the core.  No country can consider itself immune, with almost every nationality in the world falling victim to terrorist attacks.

The United Nations itself is regularly targeted. Twenty-two people lost their lives in the attack on the headquarters of the United Nations mission in Iraq, which took place 15 years ago this week. Some of our peacekeeping missions are under constant threat.

Today, the International day of Remembrance of, and Tribute to, the victims of terrorism, reminds us to stop and listen to the victims and survivors of terrorism, to raise up their voices and recognize the impact terrorism has on their lives.

We can all learn from their experiences. Communities around the world are demonstrating their resilience in response to terrorist attacks. They are countering terrorism and violent extremism in their everyday lives, in their schools, markets and places of worship.

Supporting victims and their families is a moral imperative, based on promoting, protecting and respecting their human rights. Caring for victims and survivors and amplifying their voices helps to challenge the narrative of hatred and division that terrorism aims to spread. We need to provide victims with long-term assistance, including financial, legal, medical and psychosocial support.

When we lift up the victims and survivors of terrorism, listen to their voices, respect their rights and provide them with support and justice, we are honouring our common bonds, and reducing the lasting damage done by terrorists to individuals, families and communities.

I thank those who are willing to speak out against terrorism every day. Your voices matter, and your courage in the face of adversity is a lesson to us all.

Today and every day, the United Nations stands in solidarity with you.