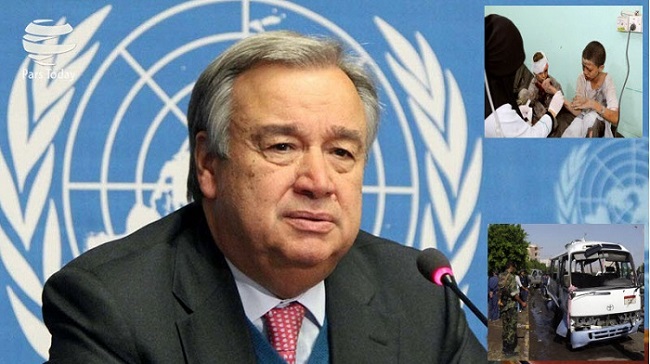 Statement attributable to the Spokesman for the Secretary-General on Yemen

The Secretary-General condemns the air strike today by the Coalition forces in Sa’ada, which hit a busy market area in Majz District and impacted a bus carrying children from a summer camp. Local health authorities have confirmed that scores of people were killed and injured, the majority of them children between 10 and 13 years old. He expresses his deepest condolences to the families of the victims.

The Secretary-General calls on all parties to respect their obligations under international humanitarian law, in particular the fundamental rules of distinction, proportionality and precautions in attack. The Secretary-General emphasizes that all parties must take constant care to spare civilians and civilian objects in the conduct of military operations. He calls for an independent and prompt investigation into this incident.

The Secretary-General urgently renews his call for a negotiated political settlement through inclusive intra-Yemeni dialogue as the only way to end the conflict. He urges all parties to de-escalate and to engage constructively in the political process, including consultations scheduled in Geneva in September.