Home News Asylum as the Basis of Spreading Terrorism 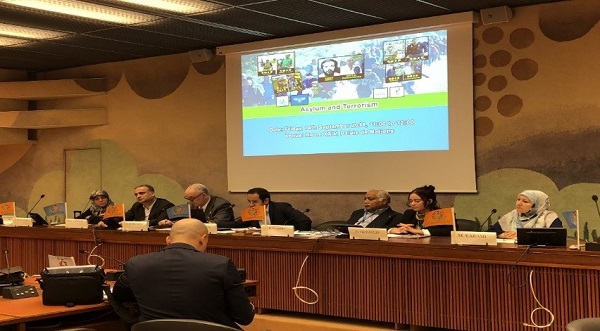 Asylum as the Basis of Spreading Terrorism

Experts addressed the issue of nexus between asylum and terrorism, the mutual effects, and the abuse of the right to asylum for spreading terrorist operation.

Ricardo Baretzky, the president of European Centre for Information Policy and Security (ECIPS) said the situation in Idlib indicates the humanitarian crisis and if the actors continue to play with human lives. It’s unimaginable that there were more than 261 fatalities and no one took the responsibility. In 2015, a total of 211 completed, failed, or foiled terrorist attacks were reported by EU states, resulting in 151 fatalities and over 360 people injured.

It is clear that the European Union is in direct breach of the 1951 refugee convention by hosting terrorists and providing national refugees’ status to terrorist during the period of 2013 to 2017 the Syrian refugee influx to European.

Research Analyst at European Foundation for South Asian Studies (EFSAS) Dr. Danielle DePaulis stressed that “The contents of this nexus is true fold because refugees are vulnerable to radicalization and the refugee flow is a backdoor for terrorist.”

From 2013 to 2017, the West experienced several terrorists’ attacks in California, Paris, London, Germany, and Brussels. These alerts confirm for some the original fears, adding that it was revealed that some of the terrorists involved had some travel migration routes undetected to enter into Europe to fulfill their desires.

She pointed out that “Those genuine refugees who are fleeing their homelands are doing so out of fear for terrorism and want for a better life for themselves and their children. It is often not by choice or desire that men and women leave the places they call home. When men and women seek asylum, it is out of necessity. Therefore, it is abhorrent that terrorists with their intentions, abuse and exploit the struggle of refugees, who in essence, are fleeing the terror of these terrorists. When a terrorist does slip through the cracks of border control and disguises oneself as a refugee, it should be condemned. However, it is important not to stigmatize all refugees because of a few. It is important to issue the aid to those who need it. By continuing to assist refugees, we can hear their stories and struggles against terrorism in order to better help prevent terrorism. By closing borders and passing restricting policies, we will force those who are victims of terrorism to remain where they are in danger, providing terrorists those to which maintain power over and achieve their goal of creating separatism between the East and West.”

Professor of Tehran University Dr. Alireza Ebrahimgol said that the 1951 Refugee Convention clearly states that the provision of this convention shall not apply to any person who has committed a crime against peace, a crime against humanity, or a war crime.

“Today we know what is the war crime, what is the crime against humanity and against peace, there are many international documents which refer to this concept and we have various and comprehensive case law from international courts.” He added that Antonio Gutrres, the former UN High Commissioner for Refugees had said asylum is not granted to a group, it is granted only to the individual only if he has stopped committing violence.

Ms. Mansoureh Karami, Vice-President of Association for Defending Victims of Terrorism emphasized that according to the 1951 Refugee Convention clearly states that the provision of this convention shall not apply to any person who has committed a crime against peace, a crime against humanity, or a war crime. But, in the recent years we see that members of terrorist groups has taken refuge in Europe and they even attend the international conferences which can be ridiculing international laws.

Contrary to UN Security Council in the 1373 resolution, some states are refusing to accept the international laws and grant asylum to terrorist offenders

Professor Warikoo, researcher at Himalayan Research and Cultural Studies stated that in the Universal Declaration of Human Rights and the articles of 1951 Convention, the right to asylum is guaranteed. UN Security Council in the 1373 resolution denied all the states of accepting the individuals who have committed terrorist crimes and take appropriate measures. But, some states are refusing to accept the international laws and grant asylum to terrorist offenders, and neglecting the consequences.

Mohammad Reza Kolahi, the perpetrator of Hafte Tir bombing resided in Europe with a fake identity

Mr. Paknejad, member of Association for Defending Victims of Terrorism pointed out the Haft-e tir bombing and his father and uncle death in the incident and added Mohammad Reza Kolahi Samadi, the agent of the terrorist act escaped from Iran in 1980s, lived in Camp Ashraf for years and then migrate to Europe while his identity was unknown. In 2015, Dutch media released a news about the killing of a person who was originally Iranian. Recently media including Parole, Panorama, Crime Site, and even a governmental media said that the murdered person is Mohammad Reza Kolahi Samadi, the former member of MKO and the perpetrator of Haft-e tir bombing.

Ms. Hagh Panahi, another member of ADVT read a statement and proposed the following recommendations to solve refugee crisis.