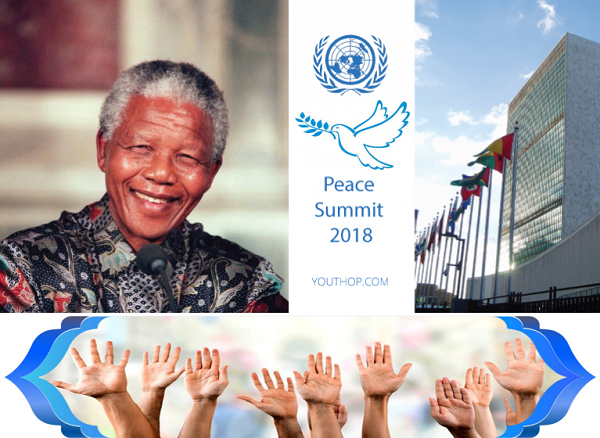 Unanimously adopting a political declaration at the Nelson Mandela Peace Summit, nearly 100 Heads of State and Government, Ministers, Member States and representatives of civil society today committed to redoubling efforts to build a just, peaceful, prosperous, inclusive and fair world, as they paid tribute to the late South African President’s celebrated qualities and service to humanity.

By the text, Heads of State and Government and Member States representatives reaffirmed their commitment to uphold the sovereign equality of all States and respect for their territorial integrity and political independence, as well as the duty of Member States to refrain from the threat or use of force.  Recognizing that peace and security, development and human rights are the pillars of the United Nations system and the foundations for collective security and well‑being, the Declaration reaffirmed the 2030 Agenda for Sustainable Development.

In addition, leaders reaffirmed that each State has a responsibility to protect its population from genocide, war crimes, ethnic cleansing and crimes against humanity.  They underscored that civil society can play an important role in preventing conflicts, contributing to peacebuilding and advancing efforts to sustain peace.

Further by the Declaration, they emphasized the importance of a comprehensive approach to sustaining peace by preventing conflict and addressing its root causes and strengthening the rule of law, poverty eradication, and social development.  “It is clear that lasting peace is not realized just by the absence of armed conflict, but is achieved through a continuing positive, dynamic, inclusive and participatory process of dialogue,” they underscored.

Opening the Summit, María Fernanda Espinosa Garcés (Ecuador), President of the General Assembly, said throughout Mr. Mandela’s life he was always guided by the principles that are the bedrock of the United Nations, including the values of peace, solidarity, cooperation and respect for all humans.

António Guterres, Secretary‑General of the United Nations, remembered Mr. Mandela as “one of humanity’s great leaders” who embodied the highest values of the United Nations.  As a political prisoner, he refused to allow his dignity to be undermined, and as President of his country, he championed women’s rights and its 1996 Constitution, which remains a beacon for human rights and equal opportunity.

Moussa Faki Mahamat, Chair of the African Union Commission, urged the international community not to be fatalistic or to abandon the struggle for life, or to resolve conflict through fight, blood, hatred and exclusion.

Matamela Cyril Ramaphosa, President of South Africa said that While much has been done to ensure the world never goes to war with itself again, he noted, the Organization has faced complex challenges over the past seven decades.  Millions of people have been killed, while others have been maimed, displaced and starved due to war and conflicts.  Of these, women and children continue to bear a disproportionate burden of these troubles.  The international community continues to grapple with the haunting spectre of modern atrocities such as the genocides in Rwanda and Srebrenica, as well as conflicts in Syria, South Sudan and Yemen, turmoil in parts of Africa and the struggles for self‑determination in Western Sahara and Palestine.

Leo Varadkar, Taoiseach and Minister for Defence of Ireland siad a voice can be silenced by death, but its message can never be suppressed.

Kumi Naidoo, Secretary General of Amnesty International stated that Millions of refugees have been subjected to inhumane treatment, the Rohingya populations are in an open‑air prison under a system of apartheid and the Palestinians in Gaza face a relentless military blockade which keeps them in poverty and misery, he continued.  The international community should not adjust to the centuries‑old subjugation of indigenous peoples, the systematic exclusion of people living with disabilities and the marginalization of youth.  They should not adjust to leaders who espouse xenophobic, fascist narratives or demean and undermine women.  They should not adjust to the bloodbaths in Syria, Yemen, Iraq, Afghanistan, South Sudan and elsewhere.  “It is shameful that some Governments preach peace while aggressively selling the very arms that prolong civilian suffering.

Adel Ahmed Al-Jubeir, Minister for Foreign Affairs of Saudi Arabia, spoke on behalf of the Arab Group, recalling that Mr. Mandela made clear that the South African revolution will never achieve all its aims until all people, including the Palestinians, also gain their freedom.

Iran’s President Rouhani also emphasized that treating racism, alienation, violence, and hatred should be sought in dialogue, tolerance and democracy. This is the way that Mandela has shown courage to true statesmen.