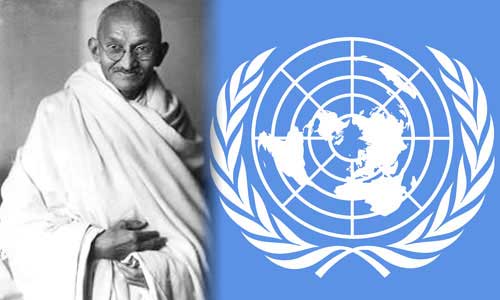 “Gandhi proved that non-violence can change history. Let us be inspired by his courage and conviction as we continue our work to advance peace, sustainable development and human rights for all of the peoples of the world.” — UN Secretary-General António Guterres

The International Day of Non-Violence is marked on 2 October, the birthday of Mahatma Gandhi, leader of the Indian independence movement and pioneer of the philosophy and strategy of non-violence.

According to General Assembly resolution A/RES/61/271 of 15 June 2007, which established the commemoration, the International Day is an occasion to “disseminate the message of non-violence, including through education and public awareness”. The resolution reaffirms “the universal relevance of the principle of non-violence” and the desire “to secure a culture of peace, tolerance, understanding and non-violence”.

Introducing the resolution in the General Assembly on behalf of 140 co-sponsors, India’s Minister of State for External Affairs, Mr. Anand Sharma, said that the wide and diverse sponsorship of the resolution was a reflection of the universal respect for Mahatma Gandhi and of the enduring relevance of his philosophy. Quoting the late leader’s own words, he said: “Non-violence is the greatest force at the disposal of mankind. It is mightier than the mightiest weapon of destruction devised by the ingenuity of man”.