Home News María Fernanda Espinosa: “To build those agreements, dialogue is the most powerful mean,”. 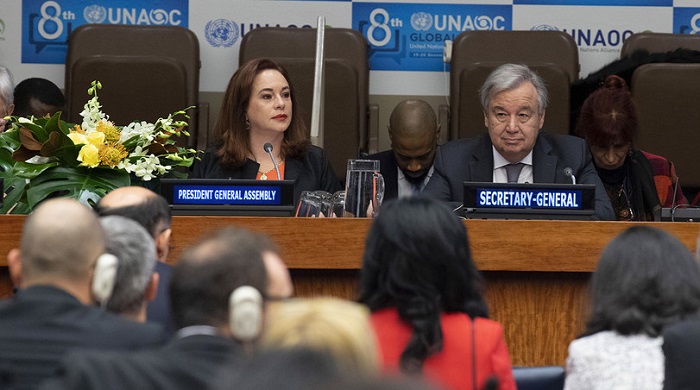 María Fernanda Espinosa: “To build those agreements, dialogue is the most powerful mean,”.

The role of the United Nations Alliance of Civilizations has never been more relevant to the 2030 Agenda objective of “building more peaceful, just and resilient societies,” Secretary-General António Guterres said on Monday, the opening day of the eighth annual Global Forum.

He recalled last month’s horrendous attack against Jewish worshippers in Pittsburgh who were gunned down while praying, stating: “It was an unspeakable act – yet I was struck by the voices that emerged. The local Muslim community, for example, raised tens of thousands of dollars to help the victims.”

According to Mr. Guterres, “the Alliance is not a feel-good initiative.”

He explained its mission as “fundamental to peace, to security, to sustainable development, to the world we need to build,” while underscoring the need to promote conditions where people of different identities, faiths and cultures “can live in harmony, free of discrimination and persecution.”

The UN chief stressed that this is not the case today, citing the ethnic cleansing of Myanmar’s Rohingyas and Iraq’s Yazidi, whose men are slaughtered, and women and girls sold into slavery.

“These peoples, and many more around the world, are guilty of nothing except being different from their persecutors,” he stated, calling it “unacceptable” and “a source of deep shame.”

He also pointed to the resurgence of Neo-Nazis organizations and anti-Semitism; vitriol directed at refugees and migrants; homophobia; and violence against women as reasons why “we must all work together to build societies that are truly respectful and inclusive, where diversity is seen as a richness, not a threat.”

We must all work together to build societies that are truly respectful and inclusive, where diversity is seen as a richness, not a threat – UN chief

To do this he set out a list of activities that began with engaging in inclusive dialogue.

“I am particularly pleased that the Alliance of Civilizations is providing a global space for religious leaders to exchange views and explore how to amplify their role,” he said.

Second is the creativity of young people, for which his youth strategy creates an environment for young people to engage with the UN – and with each other to promote understanding.

Finally, he argued that all efforts be “anchored” universal human rights, where societies are based on “true respect for the diversity of humankind.”

“And that is why we need the Alliance of Civilizations – so people of all faiths and cultures and identities, can live together peacefully, safely and free of fear,” concluded the Secretary-General.

“To build those agreements, dialogue is the most powerful mean,” she maintained.

On migration, she reminded the Forum that in December, the Global Compact for Safe, Orderly and Regular Migration, which is the first international cooperation framework encompassing a comprehensive and balance vision, will be adopted.

“As representative of 193 States who have different histories, cultures, languages and models of development, but who share the aspiration of coexisting in peace and developing in a sustainable manner,” Ms. Espinosa expressed her confidence that the Forum’s debates “will contribute to create innovative solutions to prevent conflicts, maintain peace and promote reconciliation, acknowledging that diversity is the greatest source of wealth that humanity has.”

The Alliance’s High Representative, Nassir Abdulaziz Al-Nasser, highlighted that despite notable achievements in key areas of work – such as in preventing hate speech, supporting intercultural and interfaith dialogue, empowering youth and strengthening peace education – “inciters of hate take pride in driving a wedge between different ethnic groups and civilizations.”

“For them, culture is a source of division, instead of a basis for dialogue and richness,” he said, adding that these challenges “require our collective resolve.”

The High Representative urged the Forum, over the next two days, to take stock of its achievements, identify challenges, and forge new and innovative partnerships “in pursuit of peace, justice and human dignity.”